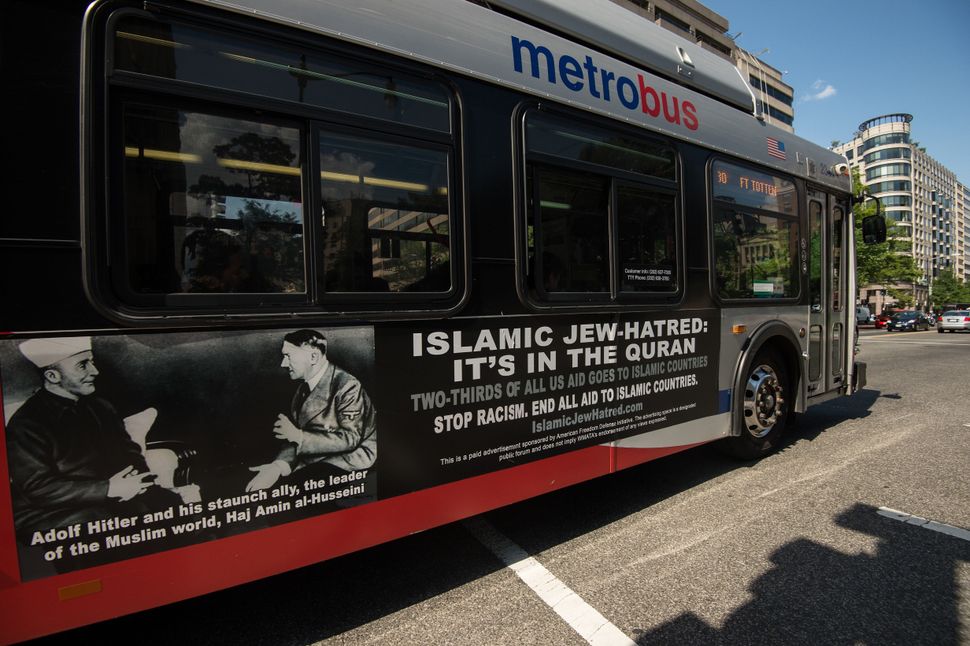 Last month, the United States Court of Appeals for the D.C. Circuit issued an opinion allowing the Washington Metropolitan Transit Authority to reject religious advertising on its system. Civil libertarians should applaud the ruling.

Over 40 years ago, public transportation systems opened subways and buses to commercial advertisements — painlessly, they thought, to hold down fares. It worked initially. For example, in 1980, the leader of the Southern Baptist Convention said that G-d does not hear Jews’ prayers — but he did not take out ads to that effect, though in today’s climate, he might.

Religion has become another flash point in the political culture wars, and local transit authorities are increasingly finding themselves caught in the crosshairs.

Responding to complaints, government agencies in metropolitan areas such as New York and Washington D.C. have instituted bans on ads that, as the MTA Policy describes, “demean .

The aforementioned D.C. Circuit case arose from a “contest” the anti-Muslim group American Freedom Defense Initiative sponsored involving drawings of Muhammad. The group would post the “winner” in an ad under a bubble that proclaimed, “You can’t draw me.” Most Muslims consider depictions of their prophet sacreligious. Knowing that, the group sought to buy a provocatively anti-Muslim ad featuring the winning cartoon on Metro subways and buses. With the same knowledge, the transit agency refused.

Privately owned media, such as radio stations, often advertise in favor of (mostly Christian) religious beliefs and reject ads they disapprove of. The government operates under different rules than private corporations do — namely, the speech and religion clauses of the First Amendment. The government may not abridge the freedom of speech, nor inhibit the free exercise of religion. However, the government may not establish religion and, as the preamble to the Constitution states, must “promote domestic tranquility.”

American Freedom Defense Initiative, the sponsor of the ad, sued the Transit Authority. The group claimed censorship of free speech. The Washington Transit Authority countered that it had acted to keep the peace. The United States District Court upheld the ban.

Because the plaintiffs cast the case in terms of politics, rather than religion (the true issue), the court of appeals analyzed the case that way.

The majority opinion followed the Supreme Court’s convoluted precedents. The Court has created three categories of venues for free speech purposes: a traditional public forum, such as a park, a designated public forum and a nonpublic forum. The first two define places where, either by tradition or government action, anyone may climb onto a soapbox. However, the government may close a designated area as long as the agency does not act arbitrarily. A nonpublic forum encompasses a place which the government opens for some, but not all, speech.

Subways and buses did not exist at the time of the Bill of Rights and became publicly owned only within the last 80 years. Therefore, at most, they function as designated public fora. The government may close them selectively and turn them nonpublic, as occurred in Washington. DC. In nonpublic fora, with the proper rules, transit authorities may allow commercial but not political or religious advertisements, as in Catholic Archdiocese of Washington V. Washington Metropolitan Area Transit Authority, in which the court there upheld rejection of an ad promoting prayer.

First, the AFDI majority examined the change. The court found no anti-religious bias behind the Guidelines. Rather, the Transit Authority sought to respond to complaints and to conserve its resources in not having to deal with controversy. Second, the court found no discrimination in the administration of the policy. The Guidelines bar every non-commercial speaker, as the Supreme Court permitted in Lehman v. City of Shaker Heights, 418 U.S. 298 (1974). Similarly, the court found no favoritism in how the Transit Authority applied its advertising rules.

A third element came into play at the last minute. The Supreme Court in Minnesota Voters Alliance v. Mansky, 138 S.Ct. 1876 (2018) required that a ban on “political” speech in polling places define the fluid term so as not to give officials discretion to favor one type of expression over another. As a result, the court of appeals sent the case back to allow the parties to litigate possible vagueness in the Guidelines.

Straightforward reasoning supports excluding the Muhammad cartoon. Transit facilities exist today as public spaces, and the Establishment Clause forbids government entanglement with religion, whether for or against a particular group.