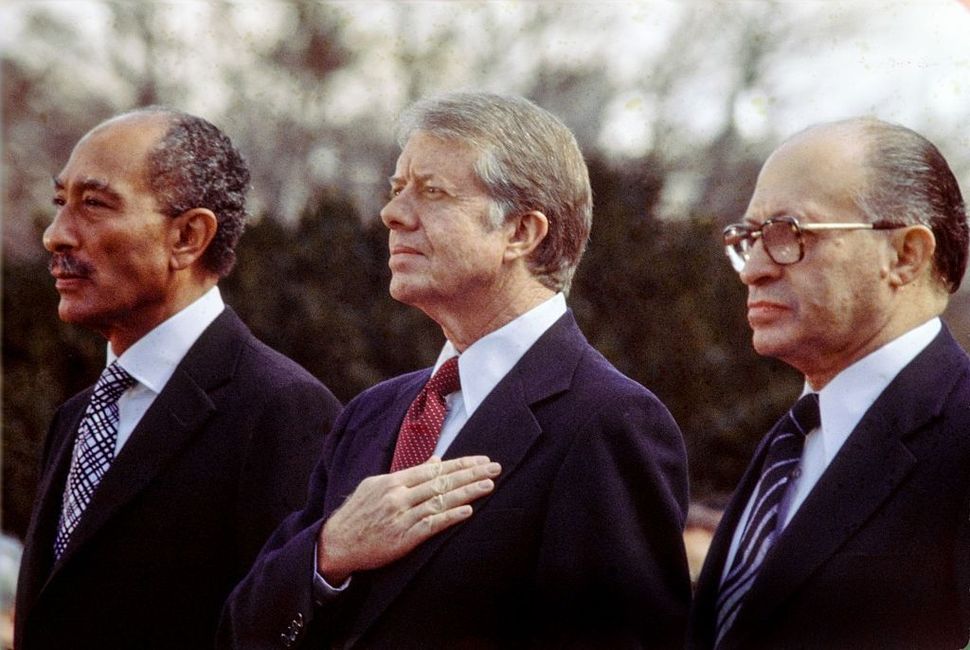 Egyptian President Anwar al-Sadat, US President Jimmy Carter, and Israeli Premier Menachem Begin listen to the national anthem before signing the Egypt-Israel Peace Treaty on the north lawn of the White House, March 26, 1979, in Washington, DC. The signing of this official treaty followed the agreement established just the previous year in the Camp David Accords. Image by Getty Images

September 17 marked the 40th anniversary of President Jimmy Carter’s singular achievement — the Camp David Accords. The Accords established the framework of the Israeli-Egyptian Peace Treaty, which the parties signed six months later. In return for Prime Minister Menachem Begin ordering Israeli withdrawal — including settlements — from the entire Sinai Peninsula, Egyptian President Anwar Sadat agreed to recognize Israel as a state. The peace has endured, although the other half of the bargain, a framework for resolving the conflict with the Palestinians, broke down shortly afterward.

Coinciding with the anniversary of the Accords, Stuart Eizenstat, President Carter’s Chief Domestic Policy Adviser, published “President Carter: The White House Years,” a comprehensive history of the 39th President’s single term in office. Because Carter served at a crucial time in history — in the aftermath of the Watergate scandal and preceding the Reagan Revolution — Eisenstat’s book makes a significant contribution to our civic understanding.

Given the intractable Israeli-Palestinian conflict and the cooperative relations between Israel and Egypt, we should commemorate Israeli-Egyptian peace.

Eizenstat covers the Begin-Sadat story in great detail. Over the past five years, Pulitzer Prize winning journalist Lawrence Wright’s play, Camp David, and his expanded and highly acclaimed book, “Thirteen Days in September,” reminded audiences and readers of the roller-coaster ride of the interactions between Israel and Egypt. President Carter himself has appeared on cable television to reflect on the 40th anniversary of those momentous days. Despite the fact that the key role President Carter played in Camp David has become well known, Eizenstat contributes rich insights, even for those of us old enough to remember the events.

We learn that when, after difficult negotiations, Menachem Begin prepared to leave Camp David, a small gesture from the president — a gift of autographed pictures for the Prime Minister’s grandchildren — turned things around. In 1979, Carter’s risky trip to the Middle East sealed the treaty.

However, to fully understand Carter’s contributions, we must focus on two lesser known issues: the attitude toward Jews and his misgivings about Evangelicals in politics.

President Carter’s book, “Palestine: Peace Not Apartheid,” called the treatment of Palestinians in occupied territories apartheid. Critics, such as Deborah Lipstadt, condemned the former president as an anti-Semite for that comparison. Eizenstat cogently exposes the accusation as a canard.

Lipstadt argues not about Israeli treatment of Palestinians, but Israel’s legitimacy as a whole. She claimed that Carter minimized the impact of the Holocaust on the Jewish people and the murder of Israelis. and claimed that he glossed over the fact that the Holocaust forced the world to recognize Israel as an independent state. Finally, selectively quoting him, she claims that he employed anti-Semitic “stereotypes.”

But this is far from the case. In his personal and professional life, Carter was sharply critical of Israel while maintaining the utmost respect for Jews. Carter showed sensitivity to the religious needs of those who worked for him and helped Jews in other ways. He never called his Chief Policy Adviser on Rosh Hashanah or Yom Kippur and respected Eizenstat’s Friday night Shabbat dinners with his family and his unavailability during Shabbat morning services. Carter appointed more Jews to public office than all of his predecessors combined.

On a policy level, Eizenstat recounts how the president’s human rights initiatives helped ease the plight of Soviet refuseniks, such as Natan Sharansky, and saved thousands of Iranian Jews from the clutches of the Islamic Revolution. However, one rather obscure law in particular, the Federal Employees Flexible and Compressed Schedule Act of 1978, meant a lot to me and still does to fellow observant Jewish federal employees.

The scheduling law makes life easier for observant Jews who work for the federal government. Previously, to refrain from work after sundown Friday or on holidays, we would have to use 13 vacation days on most years — all that federal employees earned during their first three years of service, and a substantial proportion of leave more senior personnel earned. The law allowed us to earn and use compensatory time instead, and keep our vacation days for their intended use.

Eizenstat notes that, after he lost re-election, Carter warned him about the dangers of Evangelical political excesses. Carter’s governing philosophy emerged from his religious beliefs. However, as Eizenstat explained to me, “Carter embraced the Social Gospel part of Christianity [to achieve social justice].” Carter opposed using politics “to convert others [such as for] mandatory school prayer.” Carter thought that progressives have a responsibility to persuade their co-religionists to urgent need to separate religion and state.

Stuart Eizenstat presents President Carter as a complex man. Ironically, he could not abide Menachem Begin because of the Prime Minister’s obsession with minutiae (a characteristic he shared with Carter). Nevertheless, the president put himself in Begin’s shoes and made the personal gesture that saved Middle East peace. Carter criticized Israeli occupation policies harshly, but he respected the observance of Jews in his inner circle. A born-again Christian, he understood the danger of his fellow believers mixing religion into their politics and tried to do something about it. In today’s polarized world, we need more empathy and forward thinking in public life.