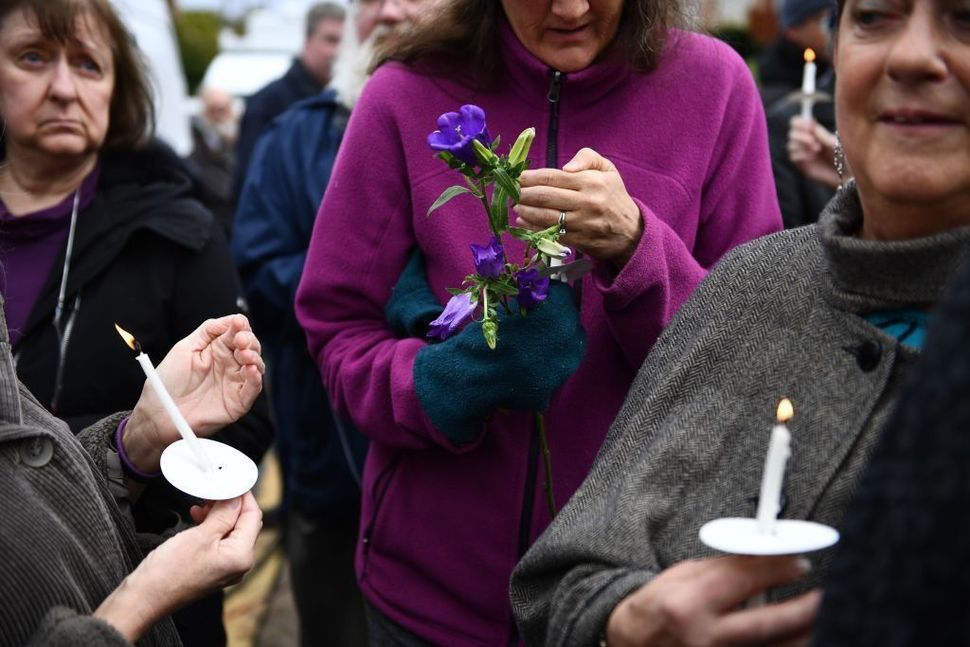 People arrive to pay their respects in front of a memorial on October 28, 2018 outside of the Tree of Life synagogue after a shooting there left 11 people dead in the Squirrel Hill neighborhood of Pittsburgh on October 27, 2018. Image by Getty Images 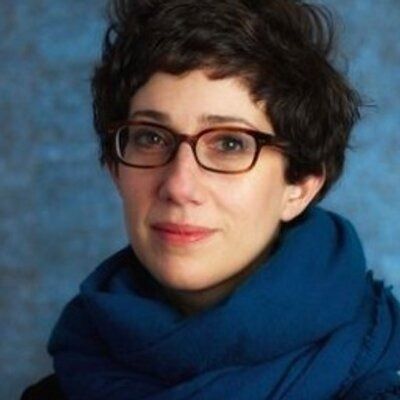 Sometimes, maybe it is the same for you, I come to shul on Shabbat and just look around. I am trying to understand the stories of all the people who have come to pray. There are the wide-eyed newcomers, so polite. There are the insiders, and the ones who came for the bar mitzvah, unmistakable in their new heels. There are the babies with all their holy baby sounds.

So it is not hard for me, maybe it is also not hard for you, to imagine the prayers taking place in Squirrel Hill, Pittsburgh when the gunman came in. It is not hard to imagine who was wearing what or sitting where, the rows, their faces, the ones who stood, the ones who hid. It is not hard to imagine their expressions, the books with the name of God that fell to the floor, the confusion, the utter shock moving through the room as the idea of safety shattered, the utter shock that moved through the room as the idea of our being unequivocally safe in America became something just out of reach, something from another time.

And I am weeping for the Jews, yes, us, the Jews and those of us who do Jewish with us. Because we deserve to hold our heads up high, to be safe, to pray without threat of assault weapons, without anyone calling us names or accusing us of taking over the world. Like everyone else, we deserve to be proud and free.

And I am weeping for this country. Because there’s a virulent strain of prejudice that is coursing through this nation’s veins, an illness bolstered by our president and abetted by the NRA. We have felt the grips of this illness before, we have read about it, we have felt it as women and as members of the LGBTQ community and as people of color and recently as people in the trans community. We have discussed it and worried about it, we have fought and protested it. But now this illness has entered yet another room in our nation’s soul, a small and private room, our room.

It would be easy and understandable now for us to let this illness dredge up memories of the darkest kind. But we cannot afford to only hide amongst ourselves and we cannot afford to hide among the many. We must remember that the future of this country needs us now, perhaps more than ever.

So we at The Kitchen will gather as we always do. The rabbis got together to study when great lights were lost and so we will follow their example. Tonight we are learning with R. Donniel Hartman and those who want to stay after to say kaddish, to talk and sing are invited.

And we will gather on Shabbat as we always do this Friday and Saturday, to pray and grieve. We will talk about our country and try to articulate even the hard truths so that we might right this grave wrong. We will welcome the many from GLIDE who have asked to join us in support. And we will chant the prayers that were left unfinished in Squirrel Hill, we will pick the holy books up again and hold them tight.

Rabbi Noa Kushner is the founder of The Kitchen.