A new life and a virtual bris In Genesis 17:12 God tells Abraham, “This is my covenant… And he that is eight days old shall be circumcised among you, every male throughout your generations…”

Apparently God left out the part about pandemics. And that a mohel could provide a substitute mohel for the “virtual” brit milah — the bris — because one hour before the scheduled ceremony he had just learned of his exposure to COVID-19.

And did I say “virtual” bris?

So we mortals have a lot to learn about this 3,000-year-old custom, which marks the covenant between an 8-day-old male — and the Jewish people — with God. My family learned quickly as the clock ticked toward eight days after a birth in the family.

Unfortunately, life outside the hospital was also changing. Because of the coronavirus pandemic, by the time the new parents brought their little “Peanut” home from the hospital, the world was unrecognizable.

They realized a traditional bris, with family, friends and bagels, was out of the question. Nonetheless, they were determined to welcome their son into the Jewish religion and give him a name among the people of Israel. That dilemma, and a screaming newborn, kept them up at night.

As they consulted with health professionals and clergy, their plans fluctuated like the stock market.

First, the idea was that just grandparents and siblings would attend the Simcha. Never mind — let’s limit it only to grandparents. On the other hand, what about performing a circumcision in the hospital? But what about the religious element? Instead, should we wait a few months until the “war” is over?

Finally, Shira Lee and Dan arrived at the perfect solution on the brit milah roller coaster. The mohel would perform the circumcision and name the baby in their Upper West Side apartment. By streaming via the Zoom app, family and friends would participate in the Mitzvah. This was a sensible plan, at least until the mohel’s exposure to the virus suddenly put everything in flux. With quick-thinking parents, who rejected the idea of a last-minute substitute mohel as too risky, and with the wisdom and generosity of the two rabbis in their synagogue, the virtual bris morphed into a simple, yet extraordinary, baby-naming ceremony.

The four proud grandparents were the first to “zoom” in and make their screen debuts on computers, iPads and iPhones. Slowly, guests magically popped up to chat, appearing in three-by-three grids before the actual ceremony. We swiped our iPad screen and eventually found guests populating at least six screens.

There was Shira Lee’s Grandma Selma beaming and streaming from her Florida kitchen. My three-and-a-half—month-old grandson in Philadelphia, clad in a onesie tuxedo and red bow-tie, was ready to welcome his new cousin. We were a quilt of well-wishers from as far away as Israel, and as close as around the corner. “mazel tovs” flew from square to square.

When the new parents appeared on the screen, we held our collective breath. How would this work?

We listened and watched, mostly with our hearts. From her apartment a few blocks away, the rabbi ”officially” welcomed this virtual community. She explained that just as we welcome a bride and groom, we say, “Baruch haBa” to a new baby. She encouraged each of us to repeat the welcome. We were muted but we weren’t silent.

The rabbi invited us to sing “Elijahu HaNavi” with her, as Shira Lee held the baby. With our support and love, we summoned the Prophet Elijah, a harbinger of a better world. Everyone sang along. We were muted but I know we sounded like a celestial choir.

Making Kiddush sanctified the wine and the occasion. In Hebrew the rabbi announced the baby’s name, “Eitan Shai Ben Daniel Aharon v’ Shira Lee. May Eitan Shai’s mother be blessed with strength, may both parents find joy in their child and inspire him to seek truth and may he have a life of Torah, chuppah and good deeds.”

The climax, one of many in this emotional half hour, began when our children explained the significance of both the Hebrew and English names. “Eitan” means strong and enduring, an appropriate name especially for today’s time and for the challenges yet to come.

“Shai” means gift. Shira Lee explained how this child is their precious gift. Shai is named for her Savta Shirley, a pillar of her community, someone who valued family and enjoyed “phone visits” with her many friends and relatives. She died the day after her 97th birthday but, thankfully, did get to know her granddaughter’s future husband.

Dan explained the significance of the English names: Isaac Howard. When God told 90-year-old Sarah she would have a child, she laughed. She named her baby Yitchak, which means laugh in Hebrew. When Shira Lee and Dan saw Isaac’s first sonogram, they, too, laughed in disbelief.

Isaac is also named for his great-grand-uncle Irving. He was an airline radio mechanic who travelled the world. While we cannot safely leave our homes today, Dan envisioned a time when Isaac, too, will see the world. Irving always packed lightly. Dan told Isaac, “You don’t need a lot of stuff. Just show up for your family and friends.” 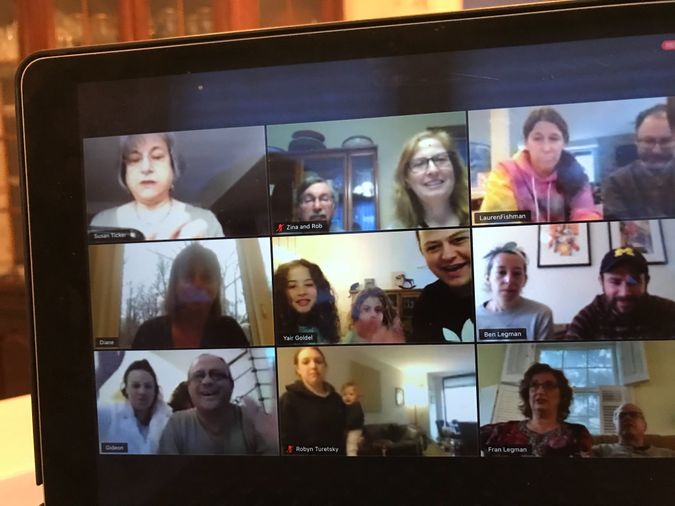 Family “zoomed” in for the occasion.

Although Dan knew Irving primarily through family stories, he did know Isaac’s great-grandpa Howie. Howie was the only grandparent to have the pleasure of knowing Shira Lee. He joined our family late in life. Although not related biologically, he valued the importance of family. Dan and his Grandpa were best friends, sharing their love of baseball, jazz and puzzles.

Toward the end of the ceremony, the rabbi bestowed on Isaac the priestly blessings that we recite on Friday nights and at weddings. Although her arms could not physically extend a few city blocks to cover Isaac’s head, we believe Isaac felt her love. She encouraged everyone to take their hands and symbolically bless the new parents and Isaac Howard.

After the grandparents shared brief readings about the continuity across generations, Dan unmuted us. Together we sang the “Shehecheyanu.”

We were so proud of our son and daughter-in-law for adapting to the difficult circumstances. There was no Brit Milah that day, no handshakes, no hugs. There was distance and closeness, hope and despair, and lots of tissues. Through it all, we were present for the naming of Isaac Howard (Eitan Shai), as Dan and Shira Lee welcomed him into their family and the Jewish faith. Savta Shirley would have loved this ultimate “phone visit.”

A new life and a virtual bris