This is not our first seder in isolation 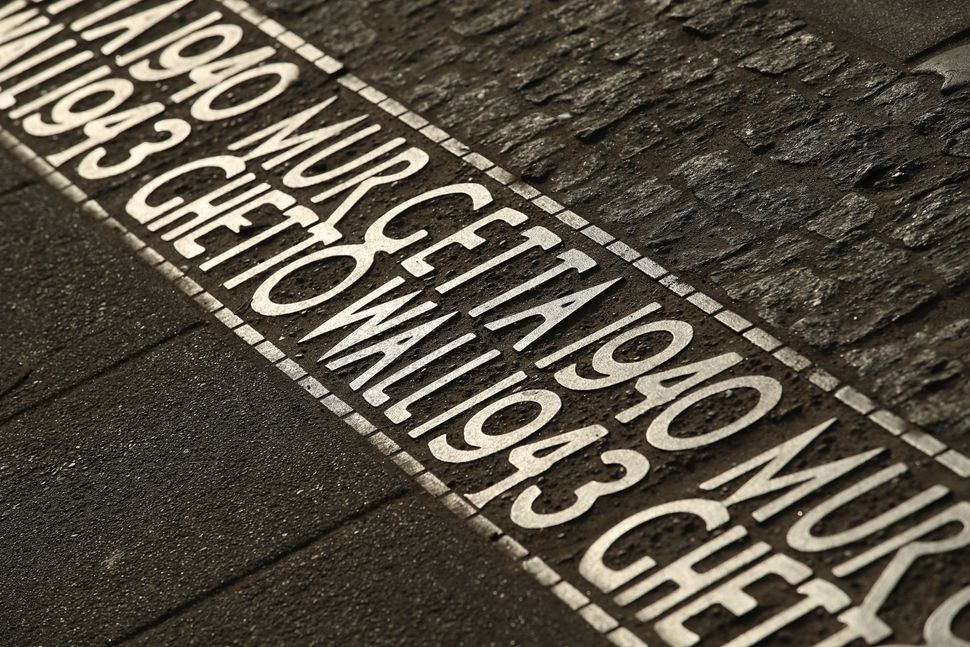 An engraving marks the former location of the Warsaw Ghetto’s wall. Image by Getty Images

Jews are no strangers to seders in isolation.

The first seder which ever took place was in the ancient land of Egypt (Mitzrayim), that narrow and constrained space.

“None of you shall go outside the door of their house until morning.” These are not words from the health department’s recent report; they are words from Sefer Shmot, the Book of Exodus 12: 22, spoken as Moses warns the people of a harbinger of death which awaits outdoors. Not a contagious virus but the slaying of the first-born son.

No, Jews are not strangers to seders held in dire straits.

During the Spanish Inquisition, untold amounts of Jews were burned to death or were murdered. And still, conversos — forced converts — secretly practiced their heritage as their seders were performed in hiding.

No, Jews are not strangers to seders held in emotionally devastating circumstances.

April 19, 1943: In an effort to oppose the transportation of the remaining Warsaw ghetto survivors to concentration camps, the Jewish resistance revolted with what would become a most historic battle. The Warsaw Ghetto Uprising was the largest single revolt by Jews during World War II and it began on Passover eve. Can you imagine what it must have felt like to be a Jew living then and battling a tyrant more evil than Pharaoh? (Mila Street — where the headquarters of the revolt took place — was also the home of my grandfather and the larger Mlotek family; I often think about their final days in the ghetto).

As a child, I grew up attending three seders. There were the traditional two but there was also the third seder. This was a cultural seder, full of Yiddish songs, Klezmer music and no mention of God whatsoever. Featured prominently amid the progressive ethos was the Shoah, the Khurbn, the Holocaust—with particular focus on the Warsaw Ghetto Uprising. That same grandfather who fled Warsaw, my zeyde, Yosl Mlotek, would lead these third seders as they were held before audiences of hundreds of people, many of whom were Holocaust survivors. 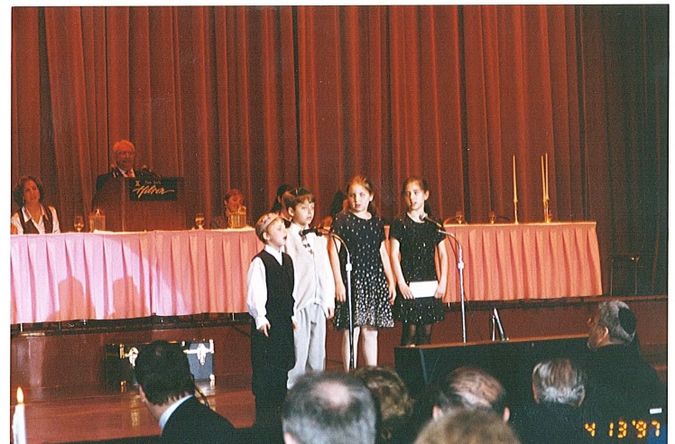 The author, second from the left, sings the Four Questions in Yiddish at the Arbeter Ring seder in the 1990s. Image by Courtesy of Avram Mlotek

The moment that always stood out most to me then was when Holocaust refugee and legend of the Yiddish stage, Mina Bern, entered and recited a poem.

“In Varshever Geto Iz Itst Khoydesh Nisn – The Month of Nisan Has Arrived” was a poem written by Yiddish poet Binem Heller. It documents that most holy and epic night and has made its way into our family’s seder (and will be featured in the online seder I am convening with many Jewish cultural organizations highlighting Yiddish music of Passover on April 12). Here is an excerpted translation by Max Rosenfeld:

Peysach has come to the Ghetto again
The wine holds no grapes; the matzeh – no grain;
But the people again sing the wonders of old;
The flight from the Pharaoh, so often retold.
How ancient the story! How old the refrain!
The windows are shuttered. The doors are concealed.
The Seder goes on. And fiction and fact
Are confused into one. Which is myth? Which is real?
“Kol dikhvin – Come, all who are hungry!” whilst children lie famished.
“Kol ditrsrich – Come, all who are hungry!” and tables are bare.

Peysakh has come to the Ghetto again.
The lore-laden words of the seder are said,
And the cup of the prophet Elijah awaits,
But the Angel of Death has intruded instead.
As always, the German snarls his commands.
As always – the words sharpened up and precise.
As always – the fate of more Jews in his hands:
Who shall live, who shall die, this Passover night.
But no more will the Jews to the slaughter be led,
The hateful jibes of the Nazis are past.
And the lintels and doorposts tonight will be red
With the blood of free Jews who will fight to the last.

” Peysakh has come to the Ghetto again
And neighbor to neighbor the battle-pledge gives:
The blood of the Germans will flow in the Ghetto
So long as one Jew in the Ghetto still lives!
In facing the Nazis- no fear, no abjection!
In facing the Nazi- no weeping , no wincing
Only the hatred, the wild exaltation
Of standing against him and madly resisting!
Hark! How Death roams in blood and in fury!
Listen! How bullets and shells whine in flight!
Behold our history writes END to the story
With death heroic, this Passover night!”

Tonight Jews all over the world are experiencing a seder in isolation. It is moments as torturous as these, where we are unable to gather physically as a community or with our families, when we must tap into our spiritual reserve, that mass reservoir of spiritual resistance that is so fundamental to the Jewish people’s DNA. We must remember our ancestors and see ourselves in their story, for their story is our story. As our guide book tonight – the haggadah – reminds us: “In each and every generation, a person is obligated to see themselves as having left Egypt.”

Rabbi Avram Mlotek is a co-founder and Director of Spiritual Life for the BASE movement.

This is not our first seder in isolation