The Good People of Corona 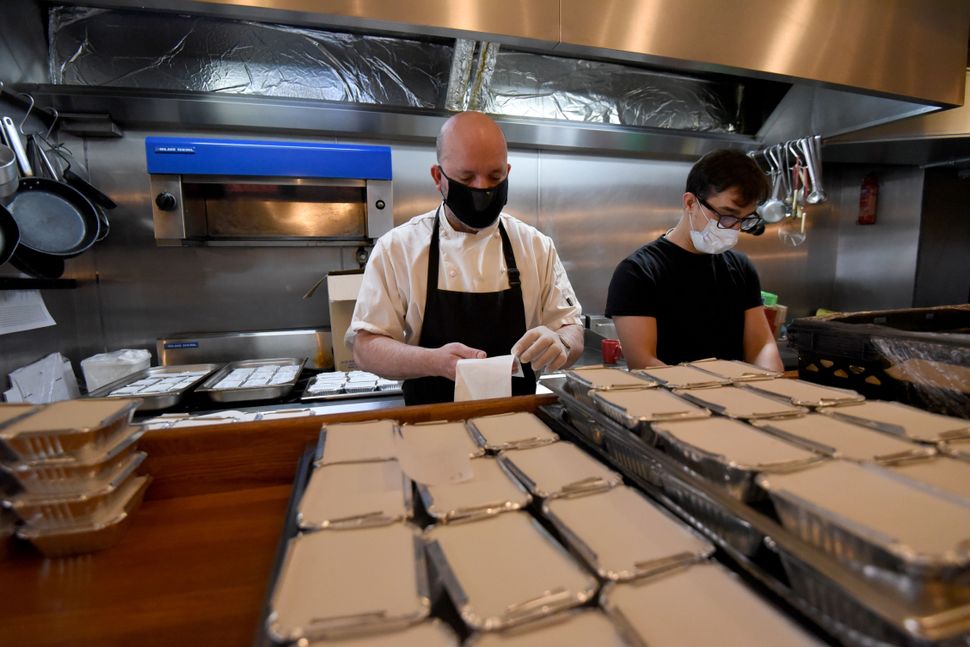 Chef Marcus Oliveira prepares food to feed to 1500 vulnerable families in Tower Hamlets at Bergen House restaurant, Newington Green on April 08, 2020 in London, England. ‘A Plate for London’ are a non-profit group trying to raise £50,000 to feed Londoners in need by getting out-of-work chefs back in the kitchen, repurposing restaurants that have been forced to close down, so they can produce nutritious meals for people in need across the city. Tower Hamlets have asked them to feed up to 15,000 children a day over the Easter holidays. There have been around 50,000 reported cases of the COVID-19 coronavirus in the United Kingdom and 6,000 deaths. The country is in its third week of lockdown measures aimed at slowing the spread of the virus. (Photo by Kate Green/Getty Images) Image by Getty Images

I used to think the city reeked. The subway handles were a hub of germs and its people a taut rope, not yet snapped.

But when the storm came here, to my adopted city, I no longer saw the dirt. What I saw instead was humanity.

“You’re in the epicenter: New York,” they told me. I read the news and saw the curve bend upward. Corona Monday became Corona Tuesday and Corona Wednesday, all of which found me in loungewear, tapping away at a screen as emails cluttered my inbox. I was one of the lucky ones.

“Stay away from the supermarkets,” my parents said, of course. And we did. For the first two weeks, my husband and I self-quarantined.

But as the fortnight came to a close, we exited our fluorescents, and entered humanity. Not the people in masks and gloves, or the socially distant lines around the grocery stores to limit its number of consumers, but the nods. The smiles. The “stay safe” vaguely heard from under the blue gauze across a stranger’s face.

It was the hundreds of synagogues in my neighborhood, closed for the first time in … ever. The synagogue is an important facet of communal life, a quorum of ten is needed for every life cycle event: birth, bar mitzvah, marriage and death, but their doors remain shut.

It was the emergency hotlines set up by well-meaning, but ordinary individuals. It was a flyer sent across text that read, “We are a group of volunteers available to do errands …. Do not feel bad using the service.” It was a WhatsApp group that exploded with hundreds of offers of giving, sharing, doing.

“Will you be a part of The Good People of Corona, when it comes?” asked a friend of mine. We were sitting on a couch next to each other, days before the virus invaded and the wumps went into hiding. At that point we were still blatantly unaware of an imaginary six-foot line that would separate us on our next visit.

The Good People of Corona? In these past three weeks, I’ve participated in (thank you, Zoom) dream weddings that were reduced from hundreds to ten people. I’ve seen families voluntarily refusing to celebrate holidays together to keep others safe.

Mass prayer groups have opened over WhatsApp. Business owners have closed or limited their storefronts, at great financial loss. Hundreds of volunteers prepare food for our healthcare workers every day, and hundreds of thousands stay at home to keep others safe.

We may be in a crisis, but one day, we’ll be able to tell our children and grandchildren that we were The Good People of Corona.

This city still reeks. Its subway handles are a hub of germs, but its people have only just begun to make it great.

The Good People of Corona