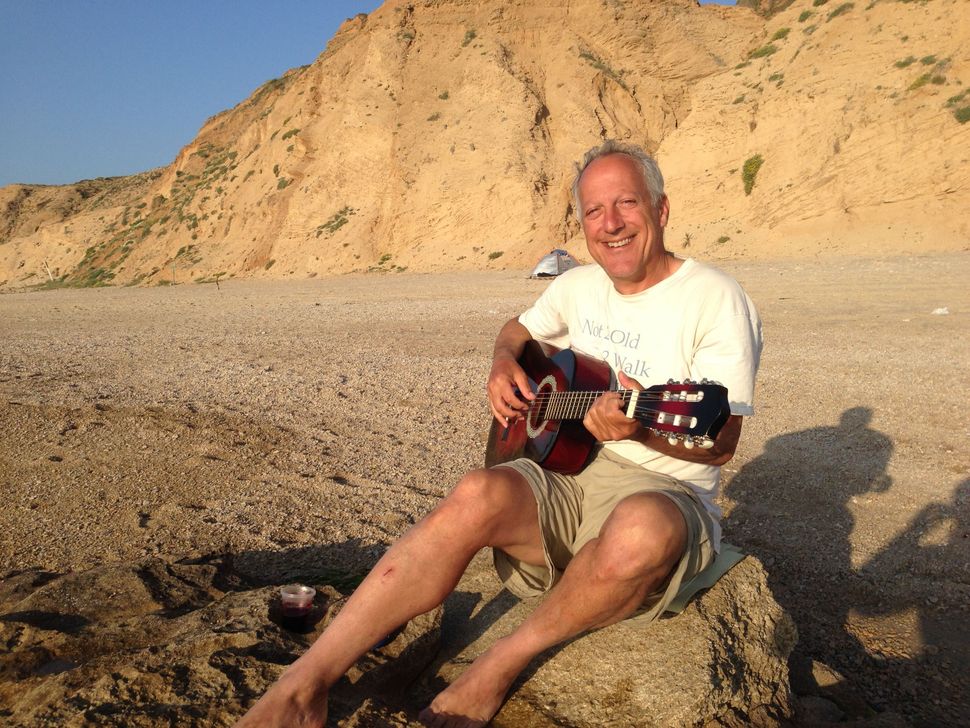 The author. Image by Aryeh Green 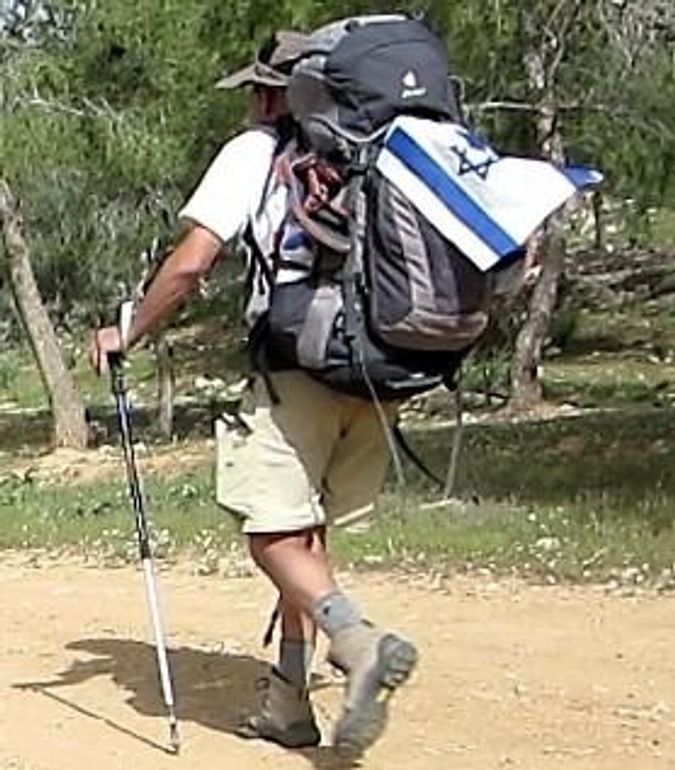 The author walks the trail. Image by Aryeh Greene

Standing on a mountaintop three days north of Eilat, I turned around for the first time. I looked back along the route I’d hiked, with its brown and gold hills and valleys, the shimmer of the Gulf of Eilat and the Red Sea in the distance. I was amazed at how far I’d come — and surprised that it all looked new to me.

I’d climbed three different mountains, trudged some 35 miles, ascended and descended thousands of feet along the Israel National Trail, yet I couldn’t recognize any of it from my vantage point at the peak of Maale Amram, just south of Timna.

In life, as in hiking, sometimes you have to stop, look back, appreciate how far you’ve come, and get a new perspective on where you have been. With most of us sheltering at home these days, it is a good time for this sort of reflection.

For me, it has helped to revisit my 700-mile trek along the Israel Trail — in Hebrew, Shvil Yisrael — six years ago. I undertook the two-month solo hike after a devastating divorce, and ended up writing a book about the experience.

A hike through Israel isn’t like walking along the Appalachian Trail, or climbing up to Machu Picchu or trekking through Nepal. Especially for a Jew, wandering the ancient paths of our ancestral homeland is a stirring experience. The places resonate with our history – Har Shlomo (Mt. Solomon), Nahal Tzin, Lachish and Azekah, Masada and Jezreel Valley – and you feel as if you are walking in the footsteps of our forefathers. Which sometimes you actually are.

On one of the first days of my journey in 2014, a few weeks before Pesach, I was plodding along a dry Negev stream bed. Like the Children of Israel wandering through the desert at the Exodus, I experienced an exhilarating sense of freedom, as I took control of my destiny after a period of intense personal hardship.

Later, in the North, I camped in the forest of Tzipori, where 2,000 years ago a vibrant community of 30,000 Jews lived and worked and prospered. With Seder night looming, my thoughts turned to a crucial element of our Jewish identity and the celebration of Pesach.

Many think of the Seder as a religious ritual. Which it is, of course – a celebration of our deliverance at the hand of God from Egyptian despotic rule, a chance to express our gratitude for our freedom and the miracle(s) of the Exodus.

And yet, unlike Yom Kippur, our day for spiritual reflection and atonement, Pesach and the Seder are nothing less than the national liberation holiday of the people of Israel.

Passover is a time to recognize, reflect on, and celebrate the forming of our national identity as Jews. The sons (and daughter) of Yaakov, the Children of Israel, were a family, then a clan, then a tribe and an ethnic or sectoral minority in Egypt. Only with the Exodus did Am Yisrael, the People of Israel, emerge as a distinct people, a nation, imbued with the physical freedom the Exodus provided as well as the spiritual inheritance of Abraham’s moral code.

That code – and our relationship as a community with the God of Abraham – then coalesced in the giving of the Torah at Mount Sinai. But the religious edicts of our tradition, and various practices and beliefs handed down and debated through the ages, are not what bind us. (In fact, disagreements over “religious” issues have too often divided us.) What connects us is the tribal, national identity passed down ever since.

As I plodded through the Desert of Tzin, in the Negev, and as I meandered around the ruins of Tzipori, stepping into a mikvah ritual bath used by a family two millennia earlier, I felt a profound bond with the place, and the people, of Israel. I know they practiced their religion differently than I do. But our link as members of a distinctive people – through time and across generations and around the world – transcends our level or manner of observance. 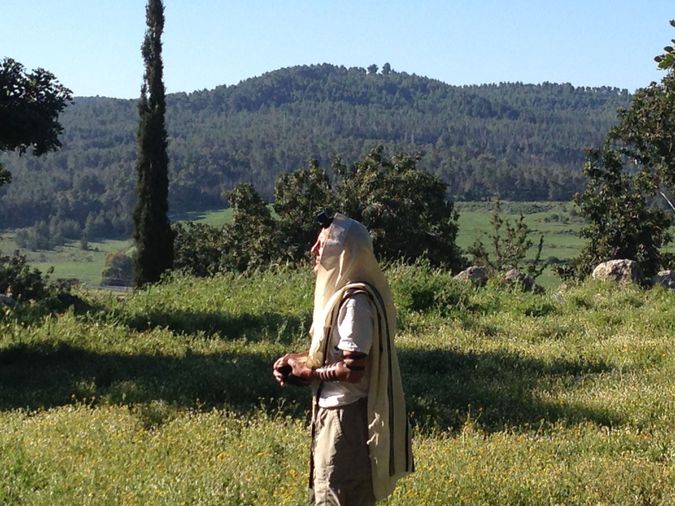 Throughout my trek on the Israel Trail, I felt this bond. And we see this, of course, more than ever today, as Jews across the planet come together to support each other (and all humanity) in these challenging times, irrespective of their level of observance, mother tongue, or location.

Just as Italian-Americans feel an affinity for Italy, or Chinese- or African-Americans for their ancestors’ land and people of origin, we Jews – the people of Judea – which is to say we Israelites – the people of Israel – can and must recognize the ties that bind us. This is true within our ‘family’; and it is true, too, in our dealings with others, whether Israel’s neighbors or our political friends and adversaries around the world.

With all the hostility towards Israel, our celebration of this holiday of national independence takes on even more significance. We are in the midst of an ideological, intellectual, civilizational struggle — and together we need to re-inforce in our children and in our communities the sense of peoplehood that was once assumed, and accepted, not only by all Jews but by virtually all the world.

Ours is a unique constellation in human history, combining national identity and religious belief within one construct. We need to foment a paradigm shift in perception: rejecting the inaccurate but prevalent view of Judaism as just another religion or faith community, and embracing/promoting Zionism and Israel as expressions of the national liberation movement of the Jewish people/nation.

Regardless of your feelings about Israel government policies, Passover is the optimal time to reassert the legitimacy of the nation-state of Israel – because that is the essence of what we are celebrating. The indigenous people of Israel returned to our ancestral homeland, the Land of Israel, reestablishing our sovereignty in a modern State of Israel. This is not a controversial statement, it is historical fact.

The Jews – Am Yisrael – appeared on the world stage when we emerged from the slavery and suffering in Egypt into the open spaces and silence of the desert, where we were able to enter into our covenant with God to help improve the world with the morality and ethical behavior mandated in the Torah. The next stage in our journey was of course to hike the “Shvil” into our promised land, where we could – and now can continue to – carry out that mission.

In Hebrew, the word for people, “am,” is spelled the same as the word for with, “im.” We Jews, the people of Israel, should remain “with” each other, struggling alongside each other, internalizing and transmitting that sense of belonging to the next generation. Our first and primary identity is as a people, as one of the world’s most ancient and revered civilizations, and this Passover is a unique opportunity to regain that sense of self, and that spirit of unity.

Aryeh Green is the author of My Israel Trail: Finding Peace in the Promised Land, and chief strategy officer of EnergiyaGlobal, an Israeli renewable energy platform for Africa. Follow him on Twitter @Aryeh_Green.