Why on this night do we sit when we could be dancing? 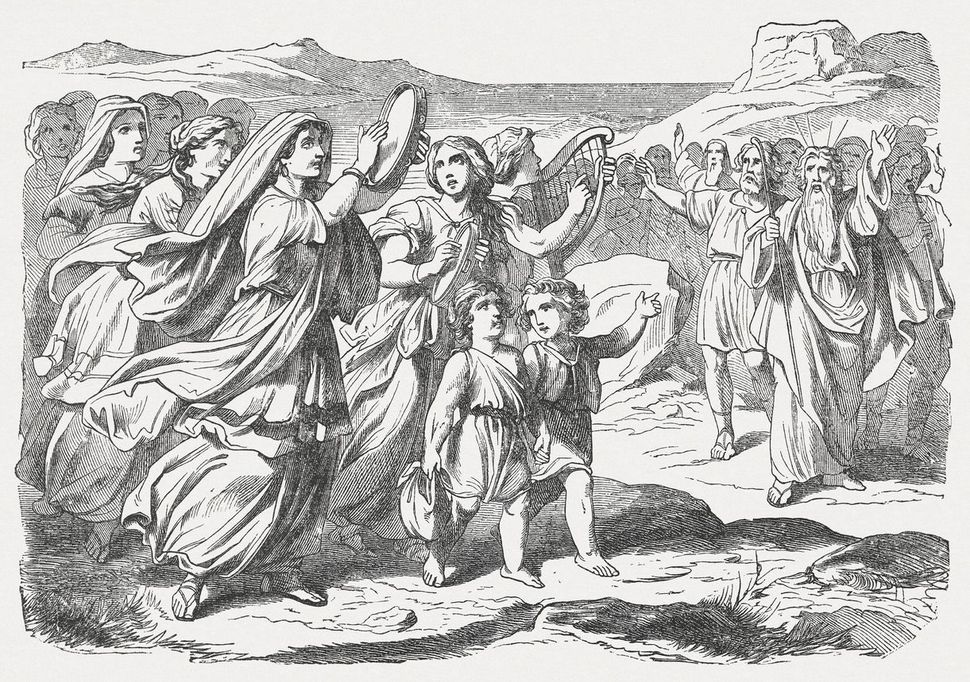 A drawing depicts Miriam dancing after the Exodus. Image by iStock 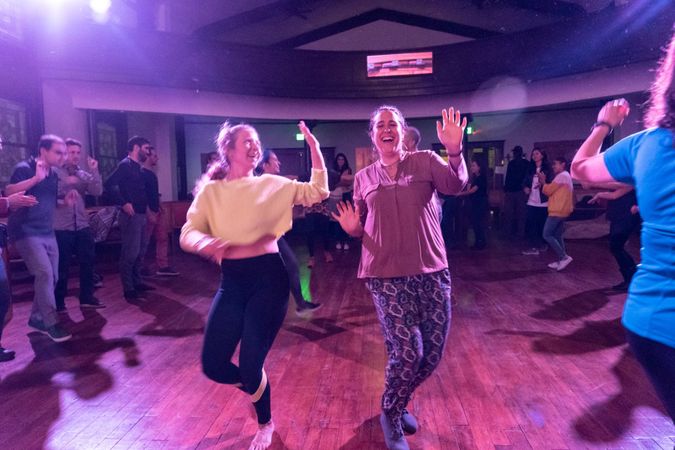 As I sat down for my family’s teleseder this year, the parallels between slavery and the physical confinement of quarantine were irresistible. We discussed how Pharaoh was or wasn’t like an oppressive pandemic, or how the virus is or isn’t like a plague. And while I appreciate those questions, I would also like to bring up a fascinating but under-explored component of the story of Exodus: the dance party.

Three years ago, I started an organization called The Living Room that hosts ongoing gatherings dedicated to building deeper connections around dance and Jewish ritual. And though I’ve never hosted nor heard of such a thing as a Passover dance, this year, amidst a global lockdown that would restrain people’s movement, I was eager to investigate freedom as a sensation or embodied expression. Three weeks into quarantine, I partnered with NuRoots, the young adult initiative of the Jewish Federation of Greater Los Angeles, to create a zoom dance experience for their annual Passover festival called Collective Escape. The more I researched in preparation for leading, the more I thought, What better way to express our liberation than with joyful dancing?

As I soon learned, the idea is embedded in Exodus itself. 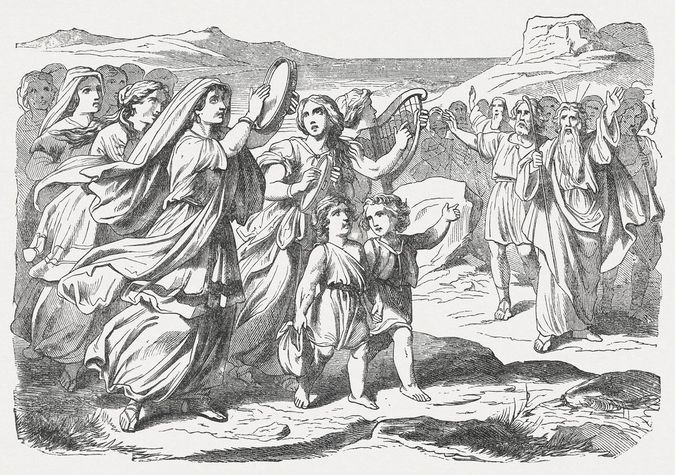 A drawing depicts Miriam dancing after the Exodus. Image by iStock

Having made it safely across the Red Sea, the Israelites sing triumphantly about their deliverance. Either immediately following or simultaneously, Miriam, Moses’s sister “took timbrel in her hand, and all the women went out after her in dance with timbrels” (Exodus 15:20). An exalted, impromptu dance party ensued.

Miriam’s get-down would not be the last time we celebrated our triumph over evil with vigorous dancing. In 1947, Jews from Palestine sent the first folk dance delegation to post-War Europe to represent Eretz Yisrael at the International World Youth Festival in Prague—a convention meant to bring hope and renewal after the devastation of the war.

One young dancer who observed the intricate and mesmerizing dances from China, Africa, and Korea thought that the Hebrew dances seemed provincial by comparison. Indeed, they had a practical simplicity. And yet the dancers took great pride in their originality—they represented a country-in-the-making and all the verve and immediacy that came with it. A certain joie de vivre overtook the dancers and affected the international audience too.

For the second phase of their tour, organized by the official kibbutz movement, the dancers visited the displaced persons camps in Europe, where survivors of World War II awaited official papers and relocation. Some, such as those in Dachau, were still living in the camp of their imprisonment.

The sixteen dancers in the troupe, half men and half women, had been selected from a fervent and growing folk dance scene that sprouted in the kibbutzim. In an effort to reimagine Jewish festivals celebrating the earth’s natural cycles and harvest times, choreographers on the kibbutz made dances to honor ‘the first fruits’ or the discovery of water in the desert. They drew creatively from their environment as well as from their own backgrounds, which meant the dances reflected both Middle Eastern and European influences.

Dance often succeeds in expressing complex psychological or social states that words cannot do justice. In the 1930s and 40s, before the creation of the State of Israel, there was an intense desire to create a national culture distinct from that of countries where Jews had experienced anti-semitism.

Folk dancing spiritually unified people from the diaspora while building their stamina in preparation for the physical labor that was needed to tend the land. It then traveled to the cities—Haifa and Tel Aviv—becoming a widespread cultural phenomenon that represented Zionist values of gender and social equality. For Haifa’s annual Independence Day parade, massive crowds gathered to watch men, women, and children dance together in large circles that filled the streets.

When the folk dancers arrived in 1947 at the displaced persons camps they were a jarring sight; young, energetic, tanned men and women from Palestine dancing animatedly on a truck bed or a patch of dirt before a grieving and weary audience. Nonetheless their audience was rapt, weeping in awe. One dancer overheard someone say in Yiddish “Are these Jews?” before kissing the hem of her embroidered dress.

Many people in the camps joined in, especially kids, excited to learn the dances and feel their souls lifted. It seemed to send a message to all those who wished the Jews gone, that they were still alive—and very much so.

These performances were about more than spreading cheer, they formed a stunning vision of the new land—the Zionist spirit embodied. And just as they had done after crossing the Red Sea, Jews were beginning to reclaim themselves, their bodies. They were expressing their ideals in a way that was visual and visceral.

As I think about our current situation, the pandemic, I can’t fathom the devastation and suffering that is coming in the weeks ahead. I only hope when it’s time to leave our confinement that we remember, like Miriam and those who came before us, that liberation is not just a thought or a feeling, it’s an action.

Amie Segal is the founder of The Living Room, a Los Angeles-based organization that hosts hip, fun evenings of dance, havdallah, and music. Their mission is to harness dance and movement to build deeper connections and a more vibrant Jewish culture.

Why on this night do we sit when we could be dancing?