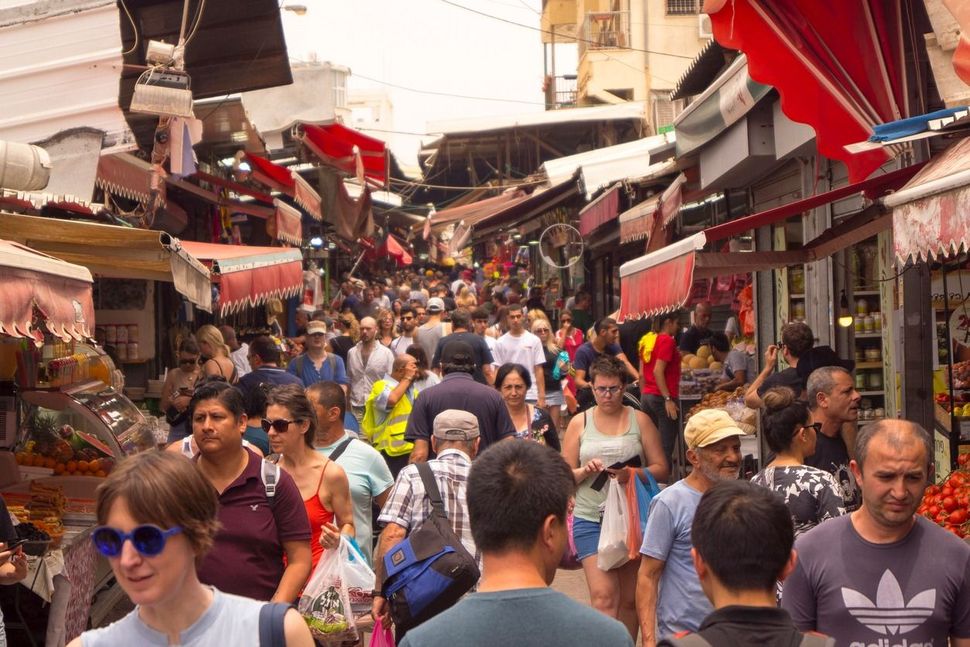 The crowded Shuk HaCarmel in Tel Aviv. Image by iStock 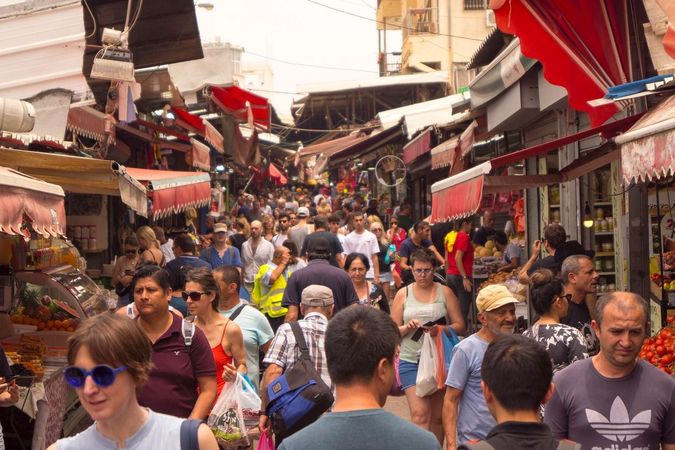 Sorry glides off the tongue; a knee-jerk reaction like sneezing or scratching an itch. Stripped down to its most basic form, sorry eludes judgment. In fact, it skates circles around it, even on the unpredictable Rideau Canal ice.

In Canada’s prim and proper capital, sorry is carefree. Reliable, but not too needy. A friend with benefits. Nothing more, nothing less. It was, at least. Then I traded in my oversized hand-me-down hockey skates for oversnug form-before-function Blundstones. Now, I keep rolling over in bed to find that sorry booty call chopping Israeli salad and frying up the best damn Shakshuka I’ve ever tasted.

I first moved to Tel Aviv after university, wrung dry from senioritis drought and eager to drink the tropical punch Kool-Aid. It took less than a week in the chaotic city to realize that despite Merriam-Webster’s advice, a word’s multiple meanings cannot always be so easily defined by a phrase or ‘used in a sentence’.

For instance, in Canada, apologies are a common reflex to any of the following:

Slicha has become a rite of passage—a literal right to pass any obstacle seen as obstructive, whether a selfie-snapping tourist caught in the Carmel Market crossfire or a coworker whose position is supposedly up for grabs. It vindicates cutting (fine) lines at grocery stores, falafel stands, and train station bathrooms. The magic word parts the masses quicker than Moses parted the Red Sea.

Even language and delivery play a role in its denotation. While in English, sorry is smooth, sultry, almost sensationalized, in Hebrew, it gets stuck in the throat, behind last night’s stale pita.

At first, I fought this aggressive etiquette. Then I made Aliyah, shoving a third passport into my moth-eaten money belt already busting at the North American seams. Officially becoming an Israeli citizen instilled a newfound desire to survive, thrive, and fit in with the fittest (and boy are they fit in this Mediterranean Mecca). I fed my Canadian politesse to the alley cats—along with the remaining stale pita—and slapped on a newer, more aggressive badge.

It took two years to fully acclimatize to fast-paced, smug-faced Israeli culture, yet only two trying minutes to abandon it entirely:

2:00 – Arrive at the gate to Prague, already plagued by a swarm of impatient passengers.

1:45 – Contemplate assuming my usual position at the rear of the chaotic queue: “confrontation free since ’93”.

1:23 – Spot a divide in said chaotic queue; a paradoxical passageway allowing other anxious travelers to pass through to their pearly gates.

1:01 – Size up the crowd. Most eyes are fixated on their five-shekel cup of airport coffee, as if staring at it will speed up its effects, or at least improve the taste.

0:50 – Throw all Canadian caution to the suffocating, mid-August Mediterranean winds and squeeze in behind a shaggy-haired hemp enthusiast and a quaffed-and-coiffed businessman, most likely a patron of the high tech arts. They might have shared a rank two years ago. I swallow my “sorry,” nearly bite through my tongue holding back a “slicha”.

0:39 – Exhale. I slip in unnoticed. A slight grin. A monumental win. I have officially assimilated, gone where no Canadian has ever gone before.

0:09 – Ten more. Silence. I confuse pride for patriotism. Then, suddenly, out of thick air…

0:02 – “Slicha!” The remark rings in through my ears, freezing my entire existence, down to my tiniest of little piggies as desperate as me to cry all the way home.

“I saw you cut the line,” she appears Deus Ex Machina.

“Relax, I’m just one person,” I say without the slightest quiver to my lip. But inside I feel shame. Regret. Confusion. Dismay.

Leading up to the trip, the pros and cons of traveling with either identity begun to place more weight on my shoulders than my 60L Osprey backpack. The toque or the untamed curls? The ripped jeans or the Roots sweats? The political debate or the political pretty boy? I stood at a crossroad, unsure whether to J-walk or straddle the sidelines waiting for the little red man to turn green—one of the rare constants in my transient, peripatetic world.

Thanks to my Deus Ex Machina everything finally became crystal clear. The humbling moment left a bitter, anise-like taste in my mouth. It was a flavour that I had never gotten used to, even after two years of black(out) licorice Thursday nights.

“Sorry” would reenter my lexicon. Alongside toques, Justin Trudeau, and my longstanding affair with everything maple.