The last Jews of Dvinsk, and the memory of a forgotten civilization 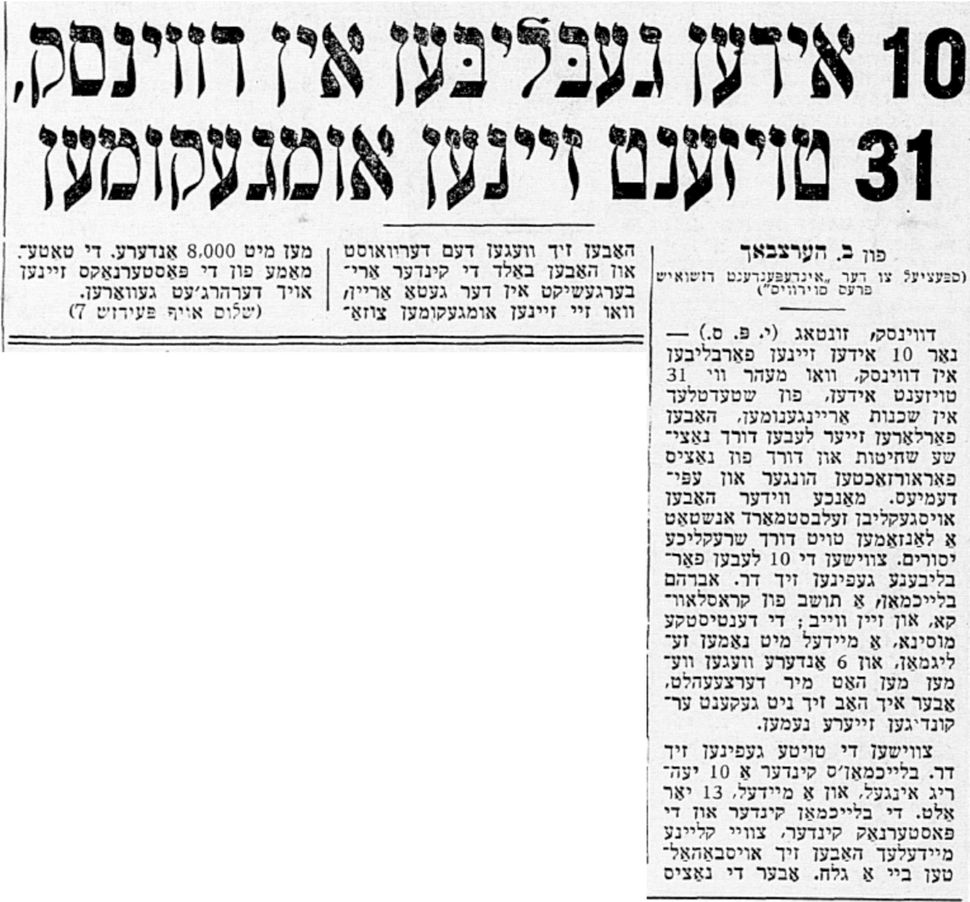 If anyone has ever had trouble understanding the Jewish mindset in the 21st Century, consider this: ours is in some ways a post-apocalyptic world. Image by Forverts Archive

The headline was first printed in the Yiddish Forverts on Oct. 9, 1944. In nine simple words, it managed to encapsulate the enormity of the Holocaust in a way few other sources do, and I believe it offers some insight into the Jewish psyche of the 21st century.

It reads “10 Yidden geblibn in Dvinsk, 31 toyzent zaynen umgekumen” For those of you who don’t also read our Yiddish section, I’ll translate: “10 Jews remain in Dvinsk, 31,000 are dead.”

That number: 31,000. It is impossible for me to comprehend the enormity of it, and Dvinsk, today called Daugavpils in Latvia, was not even a major Jewish center. The Dead of Dvinsk are barely half of 1% of the total Jewish dead of the Holocaust, In the case of Kiev, more Jews died in two days at Babi Yar than have fallen in all of Israel’s wars.

We sometimes forget how Jewish the Ashkenazi heartland of Eastern Europe was. Dvinsk (Daugavpils), Kovne (Kaunas), Vilna (Vilnius), Grodno (Hrodna), Minsk, Lemberik (Lvov), Tshernovits (Chernvitsi), Vinnitsa, Kharkov, Odes (Odessa) and many more cities that are now country capitals or major economic centers all had Jewish majorities or pluralities at the turn of the 20th century.

Today there are only ghosts. In six years not only did the Nazis kill 11 million people, but they brought to an end 1,000 years of Ashkenazi civilization between the Black and the Baltic Seas.

So, if anyone has ever had trouble understanding the Jewish mindset in the 21st Century, consider this: ours is a post-apocalyptic world. We are the remnant of a society that was practically wiped from the face of the earth. It’s why the past 70 years of Jewish life have been defined by unchecked messianism and wild attempts at reconstruction in both the secular and religious realms.

So, we became our own messiahs, we built a nation, ingathered the exiles, strived for justice and built great centers of learning, art and culture.

However, on Yom HaShoah, Holocaust Memorial Day, I still found myself dwelling on that old Forward headline. Maybe especially this year, as coronavirus rips through the global Jewish community and claims many of the last remaining survivors who are still around to tell us their stories. By losing them we are losing our connection to the world from which many American Jews came, and thus a large part of our understanding of who we are.

We are still those 10 Jews of Dvinsk, taking stock of our surroundings on Oct. 9, 1944 and realizing everything and everyone we knew is gone. Haunted by 31,000 ghosts, I can’t imagine those 10 Jews ever had a normal day for the rest of their lives. That trauma doesn’t go away, and as a people, it doesn’t go away in one generation or two, or 10.

The last Jews of Dvinsk, and the memory of a forgotten civilization