‘In the Torah, name changes signify moments of transformation.’ In the lives of transgender Jews, they are just as powerful 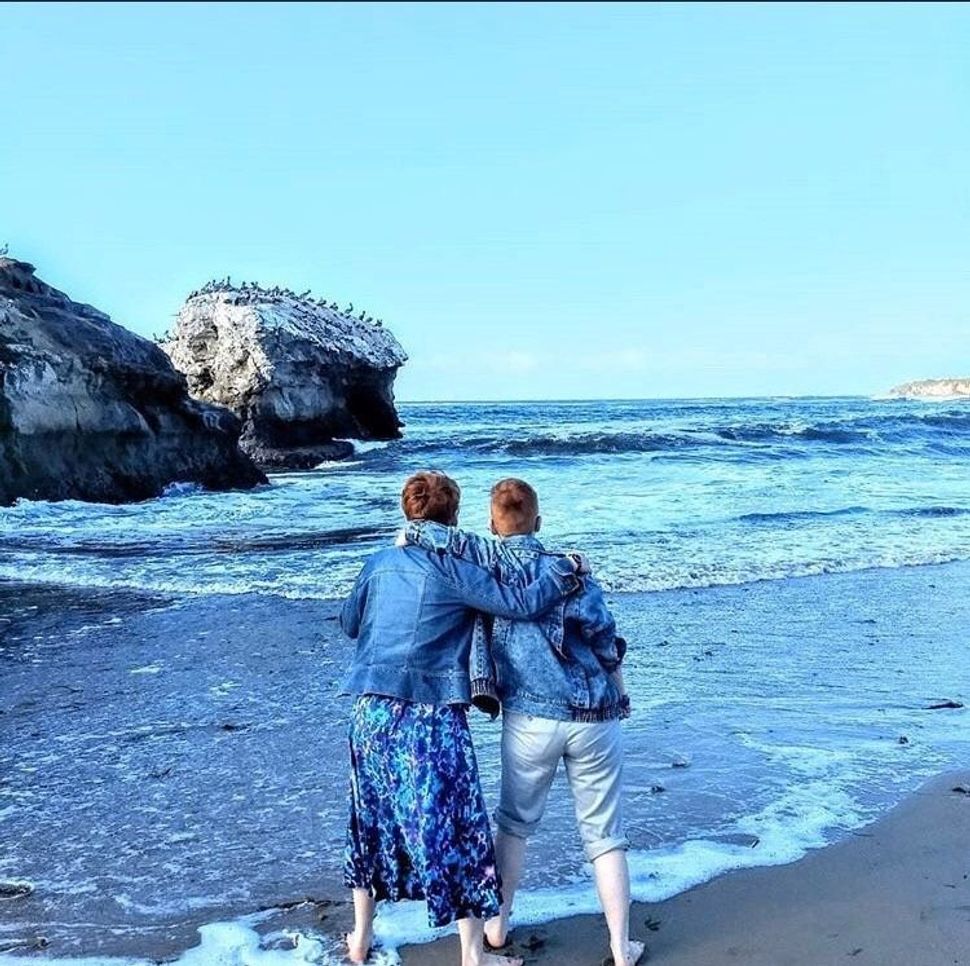 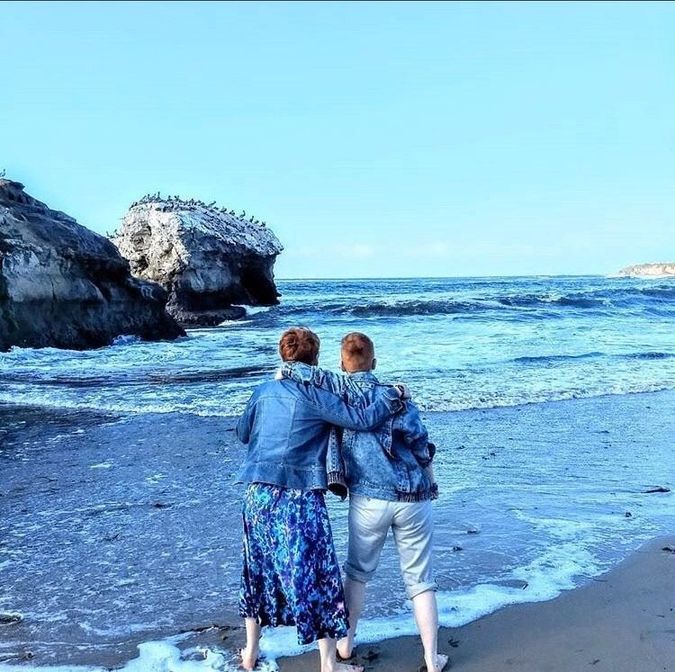 Names are powerful in Judaism. In the Torah, name changes signify moments of transformation; our Jewish ancestors Avraham, Sarah, and Yisrael each received new names as part of their journeys.

As a child, Spencer Kaseff struggled with self-loathing. Assigned female at birth, but unsure of his gender identity, Spencer was deeply sensitive and spent a lot of time alone.

But last December, Spencer left that part of his life behind during a Hebrew renaming ritual. To help him prepare for his Jewish renaming ceremony, I invited Spencer to write a letter to his younger self, and to his former Hebrew name, Chana Sarit. Spencer shared this letter at the ceremony, thanking his former name for everything he went through to arrive at this moment, before finally saying goodbye.

There’s a need for transgender Jews to receive new Hebrew names as much as new secular ones, but very few resources exist for transgender renaming rituals. According to a 2018 study in the Journal of Adolescent Health, calling a transgender person by the name they use to refer to themselves can reduce their chance of suicide by as much as 65%. In Judaism, we can take a step toward inclusion by honoring and celebrating the journeys of transgender Jews through Jewish renaming.

I have had the honor to design several of these rituals as a rabbinical student at ALEPH Renewal Seminary and as the assistant director for Hillel International’s Springboard Fellowship. One of them was for Spencer, a Springboard Fellow who works at Mizzou Hillel. Another was for 17-year-old Jasper Lauter, one of my former campers. Spencer’s ceremony took place at the annual Hillel conference this past December. Jasper’s took place in Santa Cruz, California, the day before Rosh Hashanah. Both ceremonies included three steps, deeply rooted in Jewish tradition: release, receive and celebrate.

Renaming is actually central in Jewish tradition. Avram, Judaism’s first leader, received the name “Avraham” to mark a significant transformation. In Genesis, God told him to “Lech lecha, from your birthplace and your father’s house.” Lech lecha is often understood as “go forth.” A more accurate translation is “go to yourself.” God told him, “You shall no longer be called Avram. Your name shall be Avraham, for I will make you a father of multitudes.”

For Avraham, this journey was both external and internal. He left his father’s house, his father’s idols, and his native land. He transformed from the person he was, to the person he was meant to be – the father of the Jewish people. I chose to open and close Spencer’s renaming ceremony with “L’chi Lach,” by Debbie Friedman, a song that is based on Avraham’s story.

Another significant name change in the Torah is that of Yaakov to Yisrael. Yaakov became Yisrael, meaning “struggle with God,” after wrestling with an angel and prevailing. Like Yisrael, Jasper and Spencer overcame many struggles before receiving their new names.

Water was central to both ceremonies; Jews traditionally use water for transitions through both doing tashlich and immersing in a mikveh. Tashlich is a Rosh Hashanah ritual in which we symbolically release our sins from the previous year into natural water. A mikveh is a cleansing bath – we immerse in natural water to renew, purify and prepare for transitions, often conversion or marriage, but potentially any kind of change.

Inspired by both of these traditions, Jasper, his friends, family members, and I gathered rocks on the beach and walked to the water’s edge. I encouraged everyone to say thank you as well as goodbye – even things that no longer serve us have played an important role in our growth. After we each privately meditated on these themes, we threw the stones into the sea. Jasper said goodbye to his former name, releasing the previous year into the ocean along with it, waded out of the water with his sister Emma, their arms around each other. 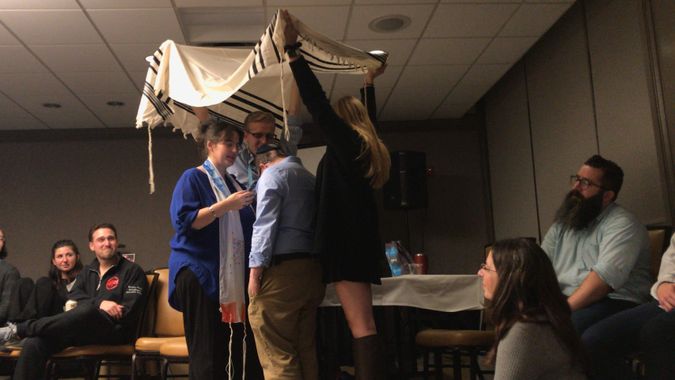 Spencer wrote a letter to his former name, shared it out loud, and then released it into a bowl of water. “I loved the idea of using water to say goodbye to my old self, like we do with tashlich at the New Year,” Spencer said. “It forced me to be like, ‘Dude, you changed your name from Anna to Spencer, a lot went down. Anna was a human who had feelings. That human isn’t you anymore but is always a part of you.’ I really appreciate Anna for all the memories and growth, but my new name feels so much more authentic.”

I encouraged Jasper and Spencer to select names that are personally meaningful to them. Jasper chose the name Nitzan, the Hebrew word for “bud.” It represents a journey, a bud that has cracked open his shell and burst forth from the soil, ready to open to the world anew.

Spencer’s new name is Chash Adam. Chash means ‘to feel.’ He told me that coming to terms with his feelings was an important part of accepting his new gender identity. Spencer was previously named for his great-grandmother, Anna, in both Hebrew and English. He chose the middle name “Adam” to maintain this connection to his family, by keeping Anna’s first initial.

At the end of his ceremony, Spencer stood beneath his tallit with me and the two friends he chose to serve as witnesses. Under the tallit, Spencer received the priestly blessing and a closing blessing, ending with “May you feel as much love and support surrounding you in every transition as you do in this one.” When we finished, Spencer’s friends lifted him in a chair and encircled him in dance, closing with a spontaneous group hug.

We can all support the Spencers and Jaspers in our lives by officiating these powerful rituals, attending them as allies, and using transgender friends’ new Hebrew names. By releasing their former names and accepting new ones, Spencer and Jasper chose to accept themselves, and they affirmed their gender transitions within the Jewish community. Jewish rituals do not just mark change, they effect change, and a name change should do the same — just as it did for Avram and Yaakov

I envision a world in which renaming rituals are included in the “life cycles” section on community websites, alongside weddings, funerals and b’nai mitzvah. May we all have the opportunity to support transgender Jews in a journey reminiscent of that of our ancestor, Avraham – a journey toward authenticity, community and love.

Permission was given to use these stories and photos.

Heather Paul is the assistant director of Hillel International’s Springboard Fellowship and a rabbinical student at ALEPH Renewal Seminary.

‘In the Torah, name changes signify moments of transformation.’ In the lives of transgender Jews, they are just as powerful