No, that wasn’t me at a crowded Rabbi’s funeral in Brooklyn 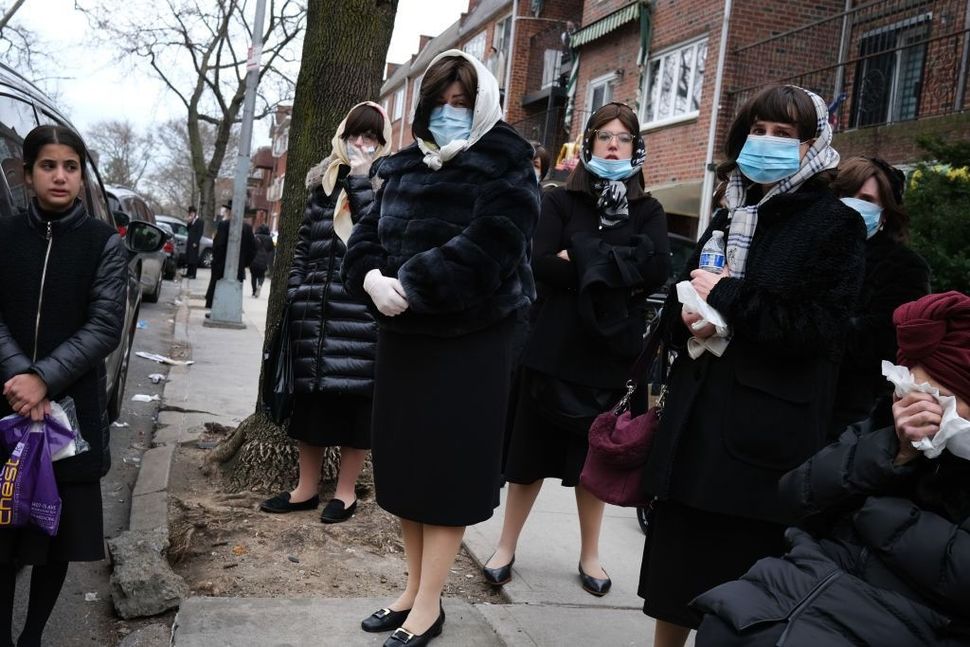 Women wear face masks as they join hundreds of members of the Orthodox Jewish community attending the funeral for a rabbi who died from the coronavirus on April 5. Image by Getty Images 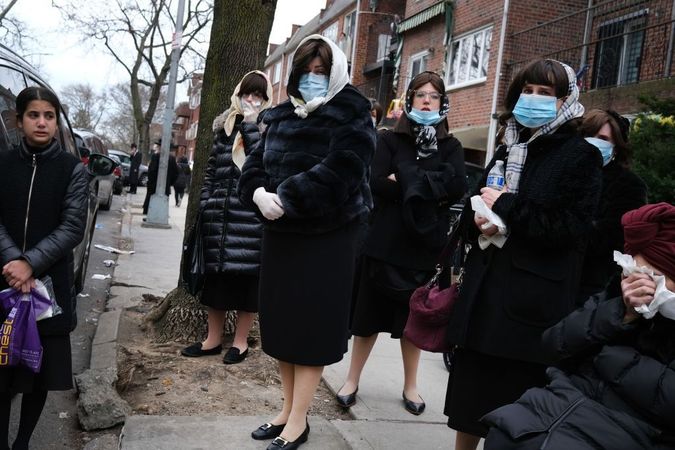 Women wear face masks as they join hundreds of members of the Orthodox Jewish community attending the funeral for a rabbi who died from the coronavirus on April 5. Image by Getty Images

True I may be one of the only Orthodox Jews you know — but no, I was not at that funeral. I was actually participating in a Jewish leadership class (over Zoom) where we were talking about shame —specifically shame within the Jewish community. Often, though we are proud to associate our Jewish identities with those making a good name for Jews (Nobel prize laureates, Olympic medalists), we are quick to disown any Jew doing something shameful.

As some of you may already be wielding your pitchforks, I want to remind you that our religion is not a pareve (neutral) mass. We Jews make waves. We push boundaries. It’s how we’ve reached new heights in medicine, technology, business, etc. But, as we’ve all experienced, when our fellow Jews push the wrong boundaries, their shameful choices reflect poorly on us all.

This difference is one of Chilul Hashem (desecrating G-d’s name/setting a bad precedent) vs Kiddush Hashem (sanctifying G-d’s name/setting a good precedent). For example: when FBI agents investigated Baruch Feldheim for hoarding PPE and he started coughing on them claiming he had Covid-19, that was a Chilul Hashem. Conversely, when my friend Tova, a nurse at a hospital in Englewood New Jersey, is asked on her orthodox nurses’ Facebook group to recite viduy, the prayer before dying, as close as possible to someone’s family member dying alone, her efforts to do so time and time again are a Kiddush Hashem.

The problem is, you probably haven’t heard of my friend Tova or her Facebook group. But I’ll bet you have heard of Baruch Feldheim. When we only have those negative associations and all their shameful weight, we reach our breaking point. I’ve had friends admit they’re feeling new levels of self-hatred after seeing news reports of packed Jewish funerals in the NY area. “They are making a bad name for us all, breaking the rules and wearing clearly Jewish garb to top it all off,” they tell me.

I agree; it is an abomination. But, before you break out your pitchforks, let me tell you about one of the most self-hating Jews in our peoples’ history. His name was Akiva. He was a self-proclaimed atheist who hated the establishment, the culture, the entire Jewish religion. Then, one day he had an epiphany: maybe his complicated hatred came from a simple lack of understanding. At the age of 40, Akiva decided to learn about Judaism. He started with the aleph bet, then left his family to study in a yeshiva for years. Ultimately, he became one of the greatest Jewish scholars of all time — all because Rabbi Akiva was willing to dig deeper and let go of hate.

After the Tree of Life Massacre our mayor, Bill Peduto, reminded us that “hate comes from a place of not knowing.” I have let those words echo inside of me as I have encountered people saying shockingly hurtful things to me because of their hatred toward the type of Jew that they only know of as being — like me — to the right of them. We are all so willing to open our minds and hearts to anyone to the left of us, to understand their denominations and ideologies, but when it comes to Jews to the right of center, I have found that we are lumped together, seen as a single shameful mass.

So please know this: I did not attend the funeral; it was not in my community, denomination or ideology to do so.

The 49 days between Pesach (Passover) and Shavuos (the holiday celebrating G-d giving the Torah on Mount Sinai) are a time of mourning for Rabbi Akiva and his students, who died during this time. Rabbi Akiva was tortured and killed for teaching Torah. His twenty four thousand students died from illness because, we’re taught, they didn’t treat each other with respect. These are some of the things we are meant to reflect on during this time known as sfira. To mourn, many avoid purchases, music or haircuts. And, to remember the students’ lack of respect for one another, some of us try to improve our interpersonal interactions — not to gossip, or to do acts of kindness. But I have another idea: what if we take this time to learn about sects within our religion we know little about? What if we took the time to ask questions instead of wielding pitchforks?

While many are shielding their childrens’ eyes from these shameful news reports, I am taking time to show my children the pictures of the people attending these packed funerals and reminding them about Kiddush Hashem vs. Chilul Hashem. In the case of the funeral, I explained to my kids that some in the picture are there because they believe the government has no say in their right to practice religious freedoms even in a pandemic. Those people are putting their lives and their communities’ lives at risk, and ultimately making a bad choice. But, paradoxically, I also teach my kids the importance of giving the benefit of the doubt. Many people in the pictures have no televisions, smartphones, internet, or any other way of understanding the sheer magnitude of what is happening all around them.

And so I ask you, fellow Jewish leaders, to take some time during sfira, time away from your sourdough starters, binge-watching and home-schooling to challenge your discomfort with Jews to the right of you. Find a Rabbi, a relative, or a friend to the right of your understanding and engage. Ask open-ended questions. Don’t assume their world view is antithetical to yours. Assume best intentions. Maybe gaining a level of understanding will help us unburden ourselves of shame and instead create and strengthen our bonds with the rest of our Jewish family. I am certain Rabbi Akiva would agree.

Shoshi Butler is an Orthodox Jew who lives and works in Pittsburgh, Pennsylvania. (Her kids are the fifth generation to call their family property in Squirrel Hill home.)

No, that wasn’t me at a crowded Rabbi’s funeral in Brooklyn