‘Slowly, a blood-red swastika was drawn across my screen.’ Zoombombing emphasizes the importance of remembering the Shoah 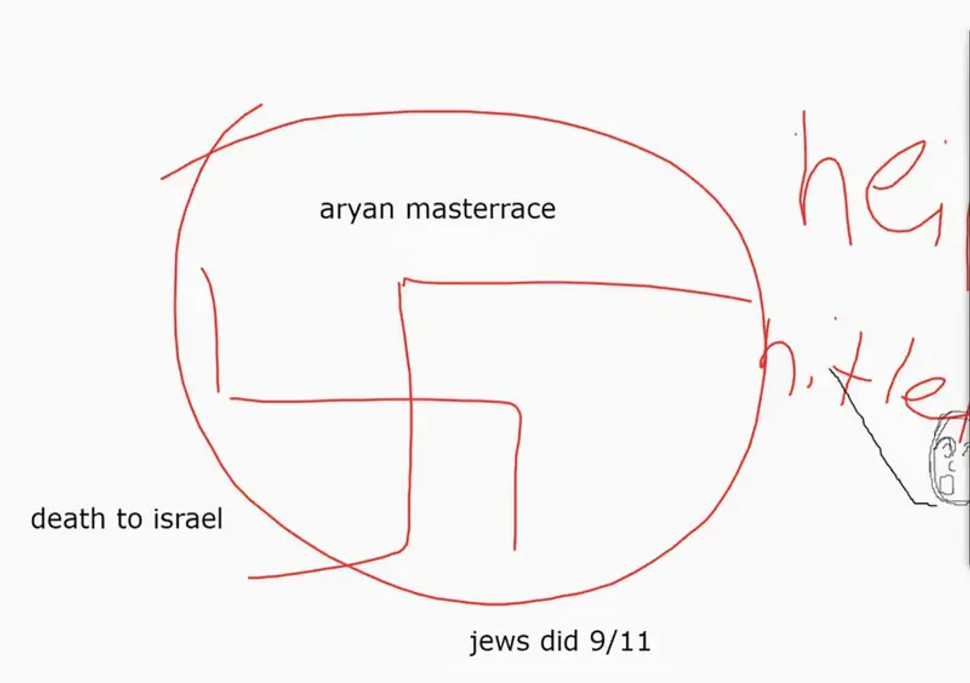 A screenshot from the Zoombombing. Image by Eleanor Carmeli 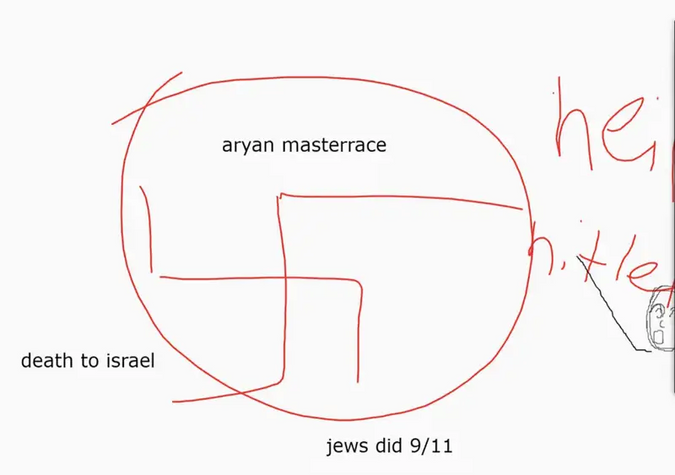 A screenshot from the Zoombombing. Image by Eleanor Carmeli

On this day, however, I would celebrate Holocaust Remembrance Day – the annual day of commemoration for the six million Jews who perished in the Holocaust. I decided to mark the day with a special intention by joining a Zoom call with thirty other Jewish students to discuss the 2019 film “Eva Stories.” I was excited for the opportunity to partake in a thoughtful (albeit remote) observance despite these complex times. 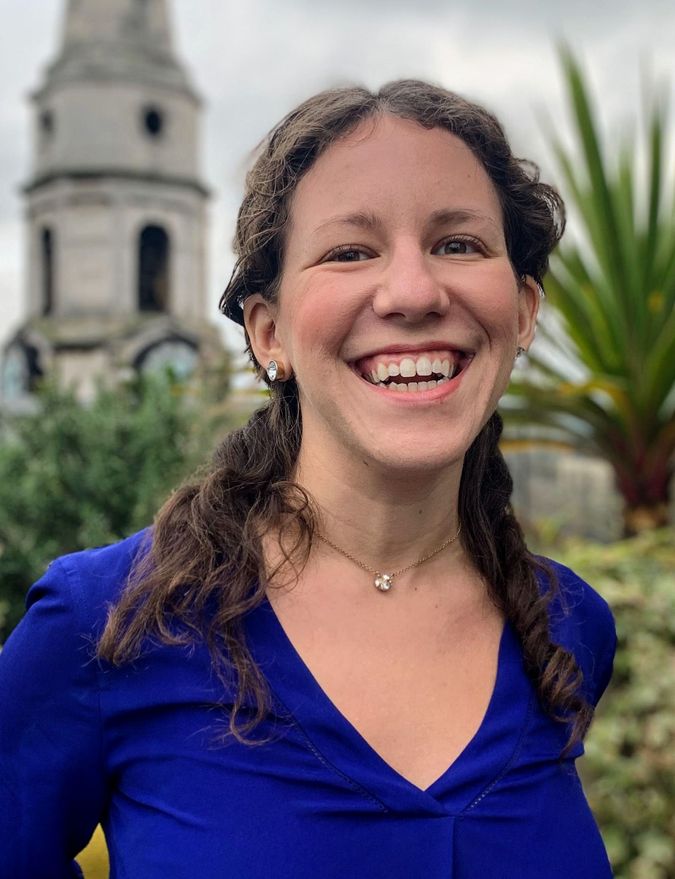 Image by Courtesy of Eleanor Carmeli

When I joined the call one minute late so as to avoid the awkward first-person-on-the-call feeling, I was immediately reassured to see other friendly faces. I didn’t recognize anyone on the call, but a quick scan of the names told me that people were dialing in from all over Europe. It was encouraging to see other Jewish millennials taking the time to make the Holocaust and its remembrance a priority. But the call became anything but encouraging shortly after I logged on.

The call began with the familiar themes of Holocaust remembrance: “never forget” the lives of the six million killed, and “never again” allow a genocide to happen. Our generation is fluent in this language, with fewer and fewer survivors among us, we inherited the shared responsibility of bearing witness to our ancestors’ suffering and to passing on their legacy. My own experience with my Savta Chana – my paternal grandmother – deepened this connection. As a third generation Holocaust survivor, I grew up with the stories of her courage and conviction and learned about what sustained her while at Theresienstadt Ghetto and during her time at the Stutthof, Ochsenzoll and Bergen-Belsen concentration camps.

That’s why, every year on Holocaust Remembrance Day I, like so many Jews, make a commitment to honor the stories of our past. This year, though, my annual tradition would be circumvented.

When I joined the Zoom call on Tuesday afternoon, I was looking forward to an hour of thoughtful and meaningful discussion. I soon discovered that I was in for a rude awakening. Ten minutes into the call, a groaning sound permeated my headphones – the type of awkward noise you might attribute to poor Zoom etiquette. This was closely followed by an abrupt outburst of “I love Anne Frank,” falling flat on raised eyebrows and confused looks. The moderator, unphased by the minor interruptions, forged on.

As I returned my focus to the Zoom conversation, my laptop screen suddenly turned white. Slowly, a blood-red swastika was drawn across my screen layered with the words “Death to the Jews” and “The Jews did 9/11.” Before I could react, the harassment continued: symbols of profanity and pronography flashed across my screen and yells of “Heil Hitler” and Holocaust jokes blared in my headphones. Images of male genitalia, photos of violent rape, and headlines of terror attacks blasted one after the other. The chatbox drowned in racist slurs and my ears exploded with antisemitic shouts and chants of “Kill the Jews.” The only thing I could make out between the rapid attacks were the horrified faces of my Jewish colleagues, stunned and sickened by what was going on.

The moderator attempted to stop the chaos but her efforts were too little, too late. Within minutes, our group of thirty students was quickly outnumbered by dozens of “zoom bombers” taking over the conversation and upending our memorial service. Just like that, our agelong commitment to Jewish remembrance was replaced by an all-too-current reminder of anti-Jewish hate.

The Jewish experience of antisemitism is not a new one. Among the more recent attacks: an open shooting during Passover, California 2019; an armed gunman in a synagogue, Pittsburgh 2018; a kosher supermarket attack following the Charlie Habdo massacre, Paris 2015; a Chabad center held hostage, Mumbai India 2008.

Time and time again, anti-Jewishness rears its ugly head. And time and time again, we fight back alongside our anti-xenophobic allies. We counter hate with solidarity: #MarchForOurLives #HateHasNoHomeHere #JeSuisCharlie #PittsburghStrong.

The theme of recall is interwoven into the Jewish being: at Passover, we gather around the table to tell the story of when we were once slaves in the Land of Egypt, and at Chanukah we light the candles to remind us of the miracles that befell us. We recall periods of violence against us, and how we rose above. The “they tried to kill us – we survived – let’s eat” condensed version of Jewish rituals and remembrance can be expounded into an elaborate tale of a centuries-old people journeying through the deserts of destitution in search of a more promising future.

And yet, antisemitic violence on video is a unique strand of hate. Zoom bombing attacks us in our most vulnerable place, infiltrating our homes and exposing us to a new serotype of a familiar virus. It violates our sense of trust as we try to find human connections online. It manipulates the devices of distance and anonymity to render the audience defenseless, leaving no clear path for recourse.

When I hung up the Zoom call that Tuesday afternoon, I was stupefied. I could not process what I had experienced. What have we learned as a human race in the seventy-five years since the Holocaust? Have we progressed in our capacity for good? Have we failed in our propensity for evil?

The stories that we tell each year on Holocaust Remembrance Day remind us of the Jewish epic: an odyssey of a people who straddle the realms of victimhood and victory, defeat and defiance, ghettos and uprisings, slavery and freedom. In every generation, we encounter foes and Pharaohs and in every generation, we find new potential for love and strength. The next time we encounter hate hiding behind the mask of a faceless screen, let’s unmute our mics, look into the camera and tell a new story of Jewish resistance.

Eleanor Carmeli is a Master’s student in International Development and Humanitarian Emergencies at London School of Economics and recipient of the Rene Cassin Human Rights Fellowship. She is a third-generation Holocaust survivor.

‘Slowly, a blood-red swastika was drawn across my screen.’ Zoombombing emphasizes the importance of remembering the Shoah