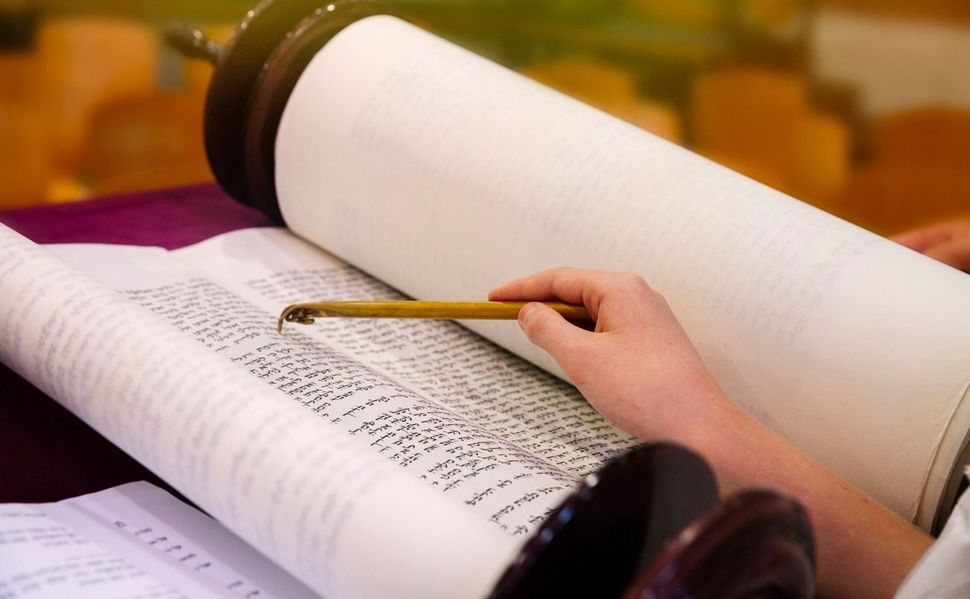 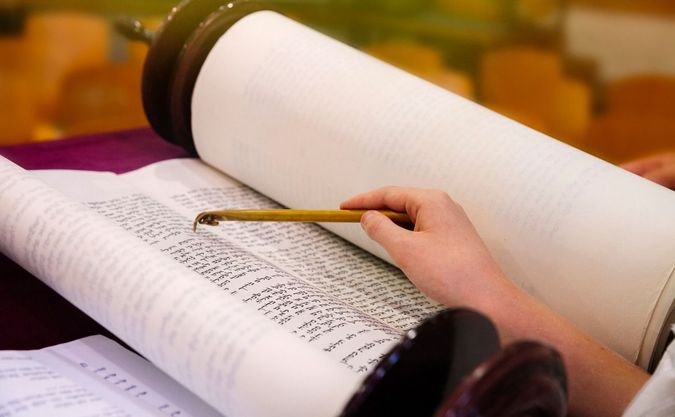 “We could play a YouTube version of ‘Adon Olam’ to a really catchy tune!” “We could play personal messages for him from family all over the world!” “We could have an Israeli rock star sing him a song!”

These were the “What ifs” that drove the conversation between me and my wife after we decided to pivot to a Zoom bar mitzvah for our son.

Like so many whose plans for major lifecycle moments unraveled because of coronavirus, we were faced with the decision of what to do for our son’s bar mitzvah this month. Ultimately, he opted to keep the date, since he’d already worked hard to learn his double-length Torah portion (Behar-Behukotai). 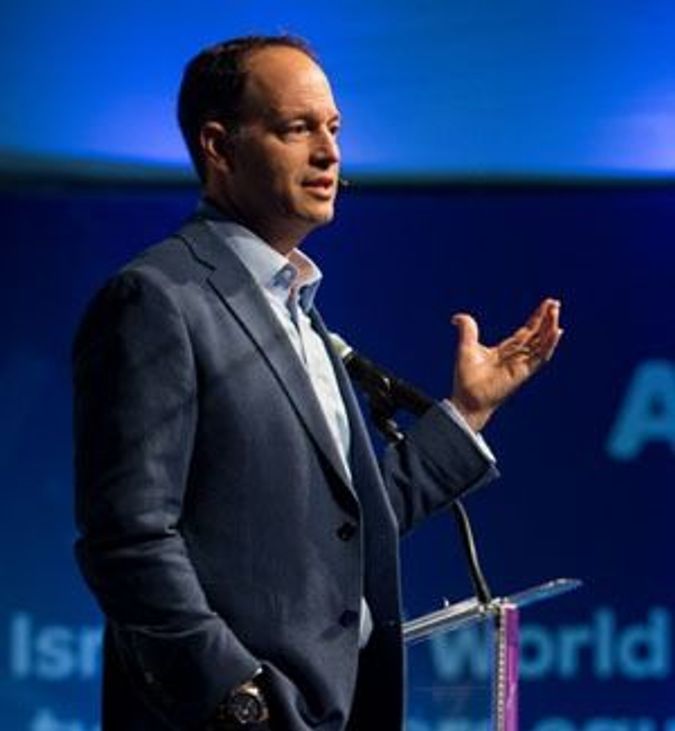 Image by Unknown (courtesy of the author)

My wife and I hugged him and said we supported his decision — but in private, we were nervous. How could we pull off a spiritual, memorable and joyous event, and have it compete with an in-person celebration? We didn’t want to simply turn on a laptop and have him read Torah in front of a computer screen. We wanted to take advantage of the opportunity by doing things we couldn’t do in-person, including engaging people that would never have been able to participate otherwise — such as David Broza. I’ll come back to that in a moment.

Neither my wife nor I work in the tech sector, but living in Silicon Valley, we can’t help but have the mindset rub off on us. And when you have to plan a virtual bar mitzvah, this ethos really helps. What does that mean? It means embracing five core elements to innovate Jewish rituals for the future.

Pivot is a favorite word here in the Valley, and it means that when you hit a dead end, you just turn another direction and plow ahead. In this case, we were not going to let a little thing like a global pandemic get in our way.

At its heart, pivoting is about having a growth mindset. It is about being able to keep finding a way to move forward, even if you are exhausted, stuck, lost or heartbroken.

This is one of Judaism’s greatest pieces of wisdom. As we wandered in the wilderness after Moses freed us from slavery, we often experienced all of those emotions. But with strong leadership, we kept on going.

Not knowing what the future will look like for Jewish rituals, holidays and lifecycle events, is like being at the shores of the Red Sea. We cannot go back to the way things were – that’s Egypt, slavery and Pharaoh’s army. Yet, we are scared because we can’t see what’s lurking in the sea ahead and we don’t know what will happen when we take that first step. But we must have faith and make the commitment to move forward.

Making the decision to forge ahead put us in good company. When my son asked at one point during our planning whether having it on Zoom would still make it “real,” I reassured him it was not only very real, but too many times in our history, Jewish 13 year olds have been introduced to adulthood outside the synagogue. Others have had to do it in secret in even worse places than our kitchen, when the Jews were truly oppressed. The Jewish People pivot. That’s just what we do.

This slogan hung on the walls of Facebook in the early days, and it means creation speed is key, even if there are missteps along the way.

This was an important motto for us in planning our son’s Zoom bar mitzvah since we went into lock-down on March 16 and our son’s bar mitzvah was planned for May 16. On the day that invitations were supposed to drop in mailboxes, everything came to a screeching halt. We had less than two months to plan a whole new course of action and execute it.

This is another Jewish value. Abraham broke his father’s idols and gave us monotheism. Moses broke with his Egyptian family and led the Israelites to freedom. When the Second Temple was destroyed, Yohanan Ben Zakkai broke with the model of a High Priest and animal sacrifice, and introduced the idea of synagogues and prayer. As Jews, we know how to break things to keep moving forward when the environment around us changes.

For our Zoom bar mitzvah, we wanted to respect our tradition — which is why my son led a Conservative service and we had seven Torah readings — but we also broke some things along the way. For example, our interpretation of a minyan was a bit more progressive: five of us were in in our living room, while our extended family sat outside in our backyard and on our deck — socially distanced, but with our sliding glass doors open.

Step 3: Don’t let perfect be the enemy of the good enough

This is something we have been trying to teach our kids for years, and now we had the chance to show them what it actually means.

It started with trying to figure out where to place the Ark. Our synagogue was very generous in loaning us a portable Ark and a Torah. Transporting those sacred items in our minivan was a bit stressful, but we succeeded with a lot less tsuris than Indiana Jones.

When we got them home, we had to decide where to set up. My kids have been going to Jewish day school and Jewish summer camp for years, so they’ve become sticklers for tradition. That meant the Ark needed to be east of us, so we could face it during the service. But then our backs would be toward the camera. In the end, we did a southeastern set up, so we could face both the camera and the Ark at all times.

We made plenty of mistakes during the Zoom bar mitzvah, opening and closing the Ark at the wrong times. But when your rabbi isn’t standing there to guide you, the choreography is all pretty much a crapshoot (and even he went out of order once). We messed up the melody a couple times too, but who knew there were so many different variations of the tune for “Amen?!” E But lightning never struck us.

HP, Apple and Google are a few of the high-tech juggernauts that began in a garage. In the early days, they all relied heavily on friends, family and connections for everything. We did the same thing.

My brother-in-law was the A/V guru who turned our living room into a studio. His friend who films commercials let us borrow professional cameras and microphones. A colleague of mine at the OFJCC worked the actual A/V table during the ceremony. A friend took our dog for the day and baked us a delicious challah. One family member bribed all the local gardeners not to use their leaf blowers during the ceremony. My in-laws brought bagels and lox for us to eat afterward — sitting 6-feet apart, of course.

This is another core Jewish value: community. It’s always been the case that Jews rely on our community. We are commanded to pray in a community of ten, a minyan. We built kibbutzim as communities. We survive the tough times and celebrate the joyous moments only by banding together as a community. This was no different, as we relied so heavily on our community to pull off this Zoom bar mitzvah.

Step 5: Turn your main disadvantage into your greatest advantage.

By having this celebration online, we knew we could invite many more family and friends than we could host in the synagogue. That meant no limits to my son’s guest list, our guest list or even the grandparents’ guest list. It would just be one big list — once we upgraded our Zoom account.

We had family and friends join us from all over the world. And not only that, but they made signs congratulating my son! Toward the end of the service, we scrolled through Zoom and saw over 300 families holding up signs saying, “Mazel Tov!” Nobody brings signs to congratulate the bar mitzvah boy in synagogue — though maybe they should.

During certain parts of the service, we played silly musical instruments. My wife and I gave speeches that included lines shouted in Michael Buffer-style, “Let’s get ready to BAR MITZVAH!” We even clanged a cowbell during our opening welcome — no one does that in shul!

We also brought in others who would never have joined us. A cousin in Jerusalem sent a video saying the blessing for the State of Israel, standing at the Knesset. The Y-Studs a cappella group sent a video of themselves singing one of my son’s favorite songs. And yes, David Broza recorded a personal message for my son and sang part of “Yehiyeh Tov,” his famous song which translates to “It will be ok.” Now come on — how many kids get to have David Broza perform at their bar mitzvah?

It wasn’t easy. We argued a lot. We rehearsed a lot. And often those went together. We were up late figuring out logistics, and we didn’t sleep much. We worried all the time about the internet going out. And we probably drank too much wine. But it was totally worth it in the end.

Everyone who participated — especially my son — will remember this Zoom bar mitzvah as one filled with joy, love, meaning and Jewish soulfulness. And at the end of the day, isn’t that what Jewish rituals and life cycle events are supposed to be about?

Zack Bodner is the CEO of the Oshman Family JCC and the Taube Koret Campus for Jewish Life in Palo Alto. He lives in Los Altos with his wife Ronit and their three children, Talia, Elie and Orly.