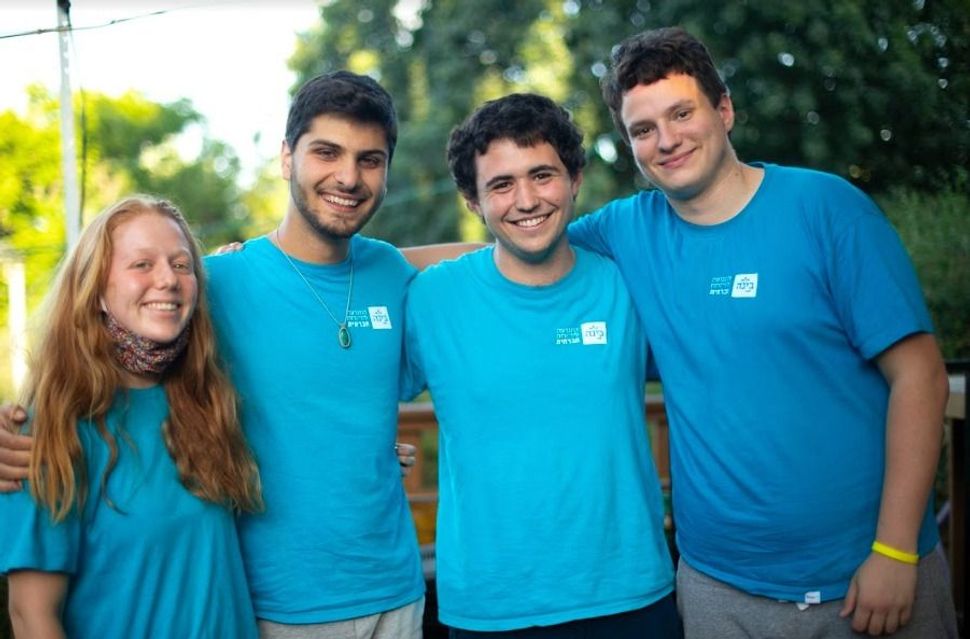 Yasmine, on the left. Image by Unknown (courtesy of Yafit Lazar)

On the night before my first day of volunteering at Mesila (a center for refugees and migrant workers in Shapira, South Tel Aviv), I typed in the address to Google Maps only to discover that my volunteering location was right around the corner, less than a minute away from my apartment.

This convenience was no coincidence. I did my gap year with BINA: The Jewish Movement for Social Change, a ten-month program of studying and volunteering with a group of international participants who take a year off before college alongside a larger group of Israelis taking a year off before the army. BINA’s campus as well as the apartments, where gap year participants live, are all in the neighborhoods where we volunteer.

As part of BINA’s Gap year, we get to experience the parts of the city that Tel-Avivians only glimpse on a hurried commute to the Central Bus Station (if they’re willing to venture that far) – we see the good and the bad: the squeals of children playing in the street that float up to our apartment and the discomfort of seeing real hardship on every corner.

I arrived in Israel from New York, where I had previously done some tutoring and worked in a community garden. Yet I often felt there was little community involvement to be done in my upper-class privileged neighborhood, a stark contrast to life in the Shapira neighborhood of south Tel Aviv.

I decided to come to Israel because, although both my parents are Israeli — my entire extended family lives in Israel — and I speak Hebrew, I’d never spent more than a few weeks here at a time and was not acquainted with much more than my relatives’ homes. So, I decided to join a gap year that would allow me to interact with Israelis, unlike a lot of gap year programs that cater to Americans and act as international bubbles.

For those “chulnikim” (Hebrew slang for people from outside Israel) in the program who had been to Israel before, south Tel Aviv was not one of the tourist destinations they had stopped by, and most of the Israelis who had lived in this country their entire life had never stepped foot in the Shapira neighborhood.

Shapira is largely populated by migrant workers and Eritrean and Sudanese asylum seekers living with very little support from the government. Although not everyone’s volunteering locations were in south Tel Aviv, simply living in the neighborhood, walking down Har Tzion boulevard everyday to get to our campus in the communal botanical gardens, opened our eyes to the reality of the refugees’ hardships and the need for the Israeli government to take more action to help.

One of my volunteer placements was at a daycare for children aged 0-5 (or sometimes even 7 or 8 year olds who couldn’t attend school for some reason and whose parents had nowhere to leave them). I started almost every week at the daycare playing, dancing and unsuccessfully attempting to teach them the names of colors.
In the specific center where I volunteered, there were about twenty children capable of walking or crawling — my charges — and a whole back room of cribs where two staff members had their hands full feeding and changing diapers. Rebeca, the owner, is a very kind and caring woman, but the long hours that parents work mean that children are left there all day, their only entertainment sources broken toys and a TV playing preschool rhymes except when volunteers come to visit.

It was especially crushing to hear the news reports of the Israeli government denying financial and medical support to the immigrant community during the height of Covid-19. I had the image of the babies and toddlers I played with every week and their desperate parents flashing through my mind. I was relieved to be able to return to Shapira when BINA organized participants to help with food and clothes packaging and deliveries in the community as lockdown restrictions were eased.

When we talk about Israel, the conversation is usually dominated by the ongoing Israeli-Palestinian crisis, but the reality is that Israel is a country just like any other, with a plethora of internal problems. I saw this through my classes at BINA, speaking to migrant workers fearing deportation after spending the majority of their lives caring for Israeli elders and delivering food packages to asylum seekers.

Over the past 10 months, living and volunteering in Shapira, I have seen the results of injustice, housing inequality and inadequate infrastructure. These inequalities exist in every city, all over the world, despite the fact that it is the role of our governments to provide financial support to help the local residents. My year with BINA made me realize that when I go home, to the incredibly gentrified city of New York, I have the responsibility to change this through activism, advocating for housing rights as well as educational and structural funding to help local residents.

Yasmine Porath is 18 years old and was raised between New York City and Shanghai. She is planning to study Environmental Science in college next year.