At Balfour, disparate voices unite to protest against Netanyahu 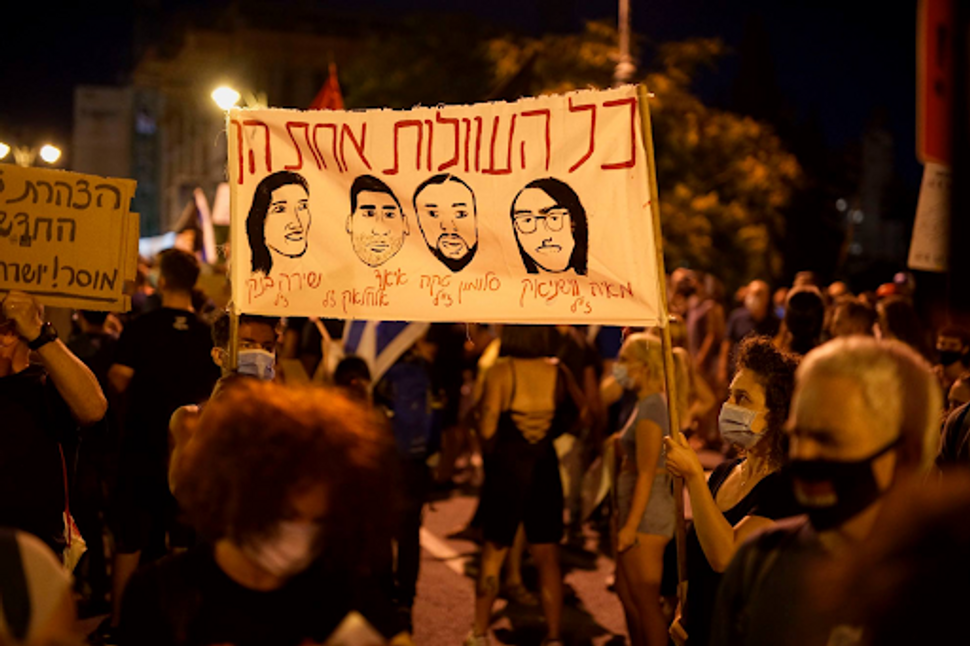 “A Prime Minister can only be replaced at the ballot box!”

How many times have anti-corruption protesters heard this phrase since Netanyahu was indicted on charges of bribery, fraud and breach of trust?

The oft-repeated retort to the only demand that unites all the protestors ignores Israeli history, where there have been many occasions of a PM standing down after losing the faith of the nation or because of their own moral conscience.

Golda Meir resigned just one month after her party won 51 seats to form her third government. This was due to a protest that began with one solitary IDF veteran named Moti Ashkenazi holding up a sign objecting to her mishandling of intelligence before the Yom Kippur War.

Menachem Begin resigned two years after winning elections in response to the fall out from the Lebanon War.

Ehud Olmert resigned during investigations against him for bribery, even before he was formally charged by the police.

On May 24, 2020, Netanyahu made history by becoming the first Israeli PM to remain in office while facing criminal charges requiring him to attend regular court hearings.

Those who are calling for him to resign are those seeking to preserve the basic standards that a Prime Minister’s main focus should bethe good of the people. Those calling for him to remain in the office during his trial and ongoing campaign against the media and minorities in this country are the anarchists who seek to weaken established democratic norms for the sake of loyalty to a leader.

Israelis have been protesting against Netanyahu for many years now, but never in the size and with the emotion, we have seen in the past month.

The match that lit the flame this time was a comment from Tzachi Hanegbi, a Likud “minister without portfolio” who said in a live interview that “this nonsense that people have nothing to eat is bullshit.” Hanegbi was largely criticized online, with many sharing the sentence “Ministers-without-portfolios are bullshit.”

Should we in the Jewish world solely support the poor in our Jewish communities or should we lead the way for social involvement in local communities and inspire others to join these efforts amid the growing social divides across the globe? In association with BINA, Forward editor-in-chief Jodi Rudoren moderates a talk on “Reclaiming Jewish Social Justice” on August 25 at 1 p.m Eastern. Sign up here.

In the past five months, Israel’s unemployment has skyrocketed from 3.9% to 24.1%. The Israeli government has been one of the least generous in the OECD in providing economic relief to those who have lost their jobs. This is no less a threat to Israeli security and our way of life than annexation.

Netanyahu’s supporters can no longer claim that he is capable of separating his duties as prime minister from his personal campaign to undermine the country’s legal authorities and portray himself as their victim. As Chemi Shalev notes in Haaretz, “Netanyahu’s plummet in the polls is a direct result of the public perception that, instead of focusing on efforts to prevent a resurgence of the coronavirus, he was busy extracting tax exemptions from the state’s coffers, fighting for foreign billionaires to be allowed to finance his legal fees and attacking the country’s attorneys and judges for daring to indict him in the first place.”

In 2020, the protestors have many objectives that include: removing corrupt politicians from office, stopping police violence, ending gay conversion therapy, the increased representation of women in politics, more support for independent workers and the unemployed and better working conditions for medical residents who are still doing 26 hours shifts in this country’s hospitals.

The only thing these groups have in common from the left and right of the political spectrum is their belief that the likelihood of their problems being solved would be increased if Netanyahu and his inflated government of 36 ministers were to be removed.

They don’t agree on who they would like to replace him, nor do they want new elections. Like the early days of the 2011 social protest, the people gathering on Balfour street every Saturday night to both rage and celebrate in unity and hope have no leader. Together they sing, “Banu Choshech Lagresh,” We have come to expel darkness.

The intersectionality of their demands was represented most pointedly in one banner raised among the crowd last Saturday at Balfour that read, “All injustices are one.” It had the images of four Israelis whose lives were tragically cut short due to structural injustice: Maya Vishniak, who was murdered by her partner; Solomon Teka, a young Israeli man of Ethiopian descent who was murdered by an off duty police officer; Iyad Al Hallak, an unarmed Palestinian with autism who was killed at the Lion’s Gate by an Israeli border police officer; and Shira Banki, who was murdered by a Haredi extremist at the 2015 Jerusalem Pride March.

The struggle to prevent violence against women, racism towards Ethiopians and Palestinians and Homophobia are rarely causes that all appear together at one rally in Israel.

The variety of voices that protest for their needs to be addressed by their government is often seen as a weakness of the movement. Yet their diversity of purpose may ultimately be their key to success. Unlike the 2011 social justice protests, which did not call for any one person to be held accountable for the high cost of living in Israel, these protests all want to see one political goal achieved: getting Netanyahu out. They hope that once Netanyahu resigns, Israel can finally be the country its founders intended it to be.

Even though I’m not optimistic that Netanyahu will resign anytime in the near future, the protests still serve an important role, giving all those gathered and their many supporters watching around the world hope that a better Israel is possible.

Their conviction reminds me of the famous story Elie Wiesel told, about a righteous person who came to Sodom, a city of corruption.

Finally, someone asked him, “Rabbi, why do you do that? Don’t you see it is no use?” He said, “I know it is of no use, but I must. And I will tell you why. In the beginning, I thought I had to protest and to shout in order to change them. I have given up this hope. Now I know I must picket and scream and shout so that they should not change me.”

At Balfour, disparate voices unite to protest against Netanyahu