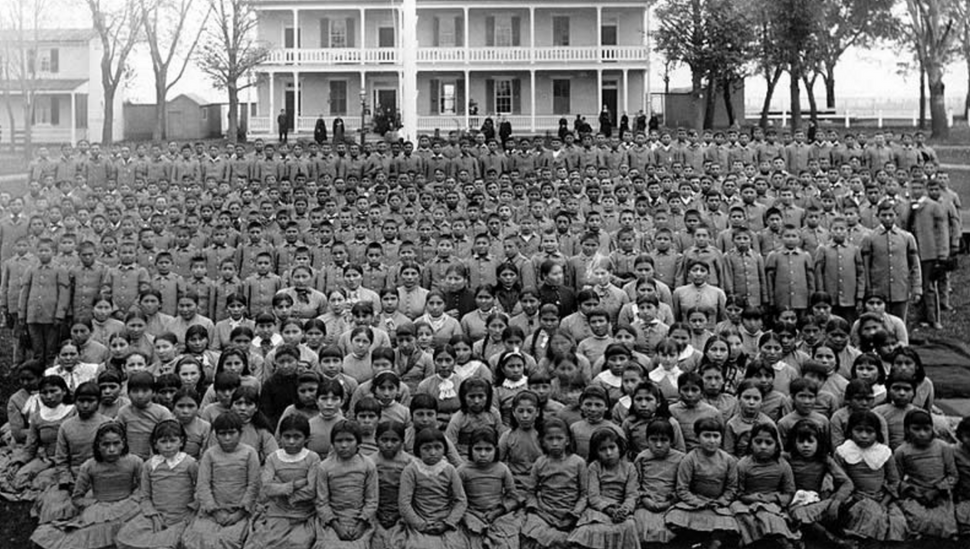 As a grandchild of Holocaust survivors, I grew up hearing about the unfathomable conditions the Jews endured while in concentration camps or in hiding. I learned about the numbers tattooed on my Papa’s arm from Auschwitz, my Bubbie’s stories of caring for the younger girls in her camp, and why my mom never had her own grandparents, aunts, or uncles. These stories are so ingrained in my childhood, I’m always startled when I find out someone doesn’t know about the Holocaust.

A few weeks ago, my friend Ben Fate Velaise shared some stories about his grandmother Mary Jane Fate, and he mentioned that she had survived the American Indian Boarding School system. As he shared more details, I realized: I was now one of those people who had to confess I didn’t know.

But how? Somehow, in the decades of my top-tier education, a century of systematic kidnapping, abuse, and torture was overlooked.

Ben, who works in People Operations at Google and is a member of the leadership council for the Google American Indian Network and the ‘Jewgler’ group, patiently filled in the gaps in my education. He explained that the Federal Indian Boarding School Policy was enacted in the late 1850s and lasted for almost 100 years.

Under the policy, the U.S. Government took hundreds of thousands of Native kids away from their families and forced them to attend these schools. At the beginning, some families willingly sent their children to the schools, but in the early 1900s, as parents became more aware of the atrocities inflicted on the students, parents resisted the program, and the U.S. government resorted to more aggressive acts, even kidnapping. Ultimately, there were over 350 government-funded and often Church-run Indian Boarding Schools across the U.S.

While every school operated differently, many of the descriptions of how the native children were taken to the schools and treated upon arrival chillingly mirror the Nazi’s treatment of Jews upon arriving to the concentration camps.

Government agents entered Natives’ homes and rounded up the children, providing vague details about where they were going. The children were then transported hundreds of miles from their Native villages by plane, boat, and sometimes even dog sled.

Upon arrival, students were commanded to strip naked. They were given military-style haircuts and were forced to take chemical baths, bathing in acids that were painful and irritating. They were instructed to put on their new government-issued uniforms and were assigned a number as a form of identification (some schools also assigned students a new Westernized name).

As I learned about these horrific acts, I couldn’t help but imagine my grandparents’ experiences as they were taken away from their families, shoved into cattle cars, and transported thousands of miles to concentration camps where their identities were stripped, their emotions were disregarded, and their humanity was questioned. I thought I was just getting emotional. I thought it was impossible for events occurring a century apart and across the world to have any relation. But I was wrong.

The parallels between the U.S. Government’s treatment of the American Indians and the Nazi’s treatment of the Jews are not coincidental. In the late 19th and early 20th centuries, America pioneered race-based lawmaking, as the general public favored the notion of safeguarding the historically white character of the country.

Congress passed immigration legislation to keep out “undesirables”—Jews, Italians, Asians, and others. Jim Crow Laws permeated all aspects of daily life in the South, and 30 of 48 states had anti-miscegenation legislation that prohibited interracial marriage between whites and Blacks and between whites and Asians, sometimes threatening violators with harsh criminal punishment.

Inspired by these laws, Hitler noted in Mein Kampf that America was the “one state” making progress toward the creation of the type of order he aspired to enact in Germany. In a 1928 speech, Hitler praised the U.S. for having “gunned down the millions of Redskins to a few hundred thousand.” American policies greatly influenced the Nuremberg Laws, the most abhorrent race legislation of the 20th century.

If American laws had not set a precedent for Hitler’s Nuremberg Laws or provided inspiration for the systematic murder of six million Jews, perhaps history could have been different. Or maybe not. We cannot rewrite history, but in order to set our future on a different path, we must study our history, we must understand our history, and we must be willing to learn from each other.