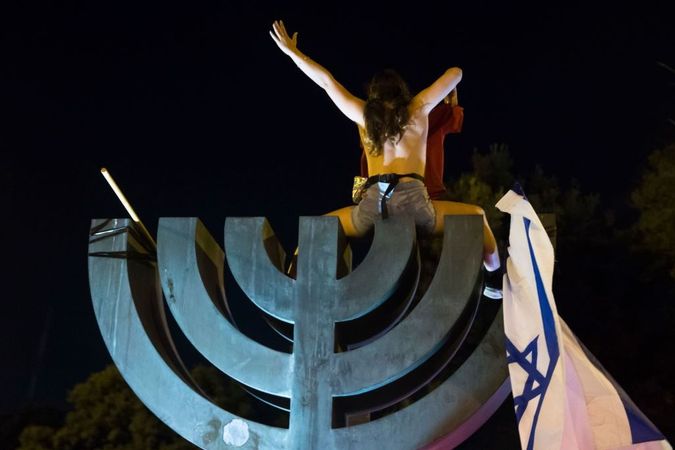 Israelis protest against Israeli Prime Minister Benjamin Netanyahu in Jerusalem, on July 21, 2020. - Netanyahu, 70, was indicted in January for bribery, fraud and breach of trust in three cases. He denies all the charges and accuses the media and legal officials of a witch hunt. Image by Amir Levy/Getty Images

Israeli society has never been as divided as it is now.

Civil strife is brewing as anti-Netanyahu demonstrations, which began in March 2020, are spreading. Although the focal point of the demonstrations has been Jerusalem, near the Prime Minister’s official residence, thousands of Israelis are also protesting on bridges and crossroads all over the country. Solidarity protests are also springing in 18 cities worldwide, including Boston, Basel, Miami, Los Angeles, Berlin, Sydney, San Francisco, New York, Toronto, and Washington, D.C.

The goal of the demonstrations, which are intensifying weekly, is to bring about Prime Minister Benjamin Netanyahu’s resignation. As he faces a trial for bribery, fraud and breach of trust, many Israelis believe he must resign at once. A prime minister, they argue, he cannot simultaneously stand trial and manage the country, particularly given the enormous domestic and foreign policy challenges it is facing. Netanyahu has also mishandled the second wave of the pandemic. The current unemployment rate stands at 11 and Israel is in the midst of the worst recession since the founding of the state, providing totally inadequate support to those most affected by the crisis. Likud Minister without Portfolio Tzahi Hanegbi referred, in a television interview, to people’s claims of hunger and food shortages as “populist bullshit.” The government’s disastrous pandemic response has added to the already full basket of bitterness.

While Netanyahu labels those who challenge him as “Putschists,” a popular slogan depicts him as the “Crime Minister.” Opponents view him as a self-serving dictator who is willfully undermining the foundations of Israeli democracy by attacking the media, the judicial system, and the basic rule of law, while deflecting any criticism for his failed domestic policies. The judicial system is singled out as having “stitched-up” an indictment against him: “The objective is to depose a strong, right-wing prime minister, and thus remove the nationalist camp from the leadership of the country for many years.”

Combined, these are not single-issue protests; they can be characterized as laying the foundations for a wider socio-political domestic conflict and perhaps a civil war. Nonetheless, Netanyahu refuses to leave.

The gaps between the Israeli Left and the Right are unbridgeable. Civil discourse is no longer possible. The response to the anti-Netanyahu uprising is a continuous, venomous campaign against his opponents. Every leftist, Arab, or Ashkenazi Jew is viewed as a conspirator against King Bibi. An ethnic divide that pits the “Second Israel” (Middle Eastern or Mizrahi Jews) against the “First Israel” (Ashkenazi or European Jews) has become an integral part of the festival of hatred.

The deep anger and resentment felt by the “Second” against the “First” Israel dates back to the 1950s when hundreds of thousands of Jews arrived in the newly-established state from several Arab countries. immigrants from Eastern Europe who also arrived at that time were settled in the country’s urban areas in the center. In contrast, the Mizrahi Jews were forced to settle against their will in remote, desolate areas in the periphery, lacking infrastructure and meaningful employment. They were considered by the socialist Ashkenazi elite as culturally inferior, and were systematically discriminated in nearly every aspect of life. Menachem Begin, who understood their electoral importance, welcomed them to the Likud and won their overwhelming loyalty and support that brought him to power in the 1977 elections.

Over the years, with an increase in inter-ethnic marriages and upward economic mobility by Mizrahi Jews, their anger began to subside. However, Netanyahu skillfully played to their earlier resentment that was never forgotten, and their hatred towards the Ashkenazim can be seen now as payback.

An example of the vitriolic discourse against the left is an interview by the extreme right-winger, singer-celebrity Dudu Elharar’s 2018 interview to the Israeli radio station FM103: “I would be happy to sit on a roof in [the concentration camp] Treblinka and watch Amos Oz dissipate in the chimney’s smoke.” (Oz, one of Israel’s most celebrated authors, was considered the left’s voice of conscience; he died in 2018). 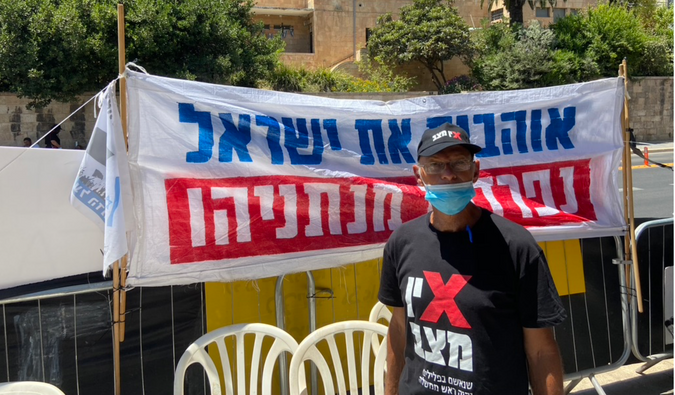 In this toxic environment, the pro-democracy demonstrations are a cri de coeur by young and old Israelis, who feel enraged that their country has been hijacked by a corrupt dictator who will not hesitate to scorch the earth to preserve his rule and avoid a trial. The protesters are hell-bent on escalating the protests until he quits

Virulent and frequent attacks on the media are part of Netanyahu’s playbook. He blames the “fake news” for instigating the protests against him. The profound divisions in Israeli society are most visible in the social media, where venom and hostility by Netanyahu’s supporters directed at “the enemies of the state” have become normal discourse. Echoing his father’s views, Yair Netanyahu has posted on Twitter: “’Left’, ‘Liberal’, ‘Progressive’. These are all cover words for communist.”

The Jerusalem district police, which handles the large demonstrations in the capital, is transforming into the regime’s praetorian guard. It has been ordered by the Minister of Homeland Security, a Netanyahu loyalist, to respond brutally against the demonstrators. Hundreds have been arrested and scores have been wounded, including the former director of Israel’s Internal Security Agency (Shabak) who participated in a recent pro-democracy protest.

Violence has been directed against the protestors not only by the police but also by hate-mongering groups such as the La Familia, a group of ultra-right, largely-Mizrahi, racist, soccer fans from Jerusalem.

How likely is it that Netanyahu will relinquish office?

Netanyahu’s faithful, which also include the governing coalition’s religious parties, are circling the wagons around him, trying to silence his critics. Netanyahu portrays himself as a victim of a conspiracy. He aims to de-legitimize and defeat the protests by promulgating the politics of fear — I am the only one who can keep Israel safe! — and by espousing deep hatred towards those leftists who “have forgotten what it means to be Jewish.”

It is unlikely that those who strongly support Netanyahu will abandon their cherished leader and join the protests. They are convinced that his downfall will result in a catastrophe for them and the state.

Netanyahu’s Likud party associates are fully behind him; they have become his hewers of wood and drawers of water, echoing his messages of hate, derision and division.

Given the magnitude of Netanyahu’s support, the pro-democracy protests, even with a significant increase in participation, are unlikely to lead to the Prime Minister’s resignation. Despite their dedication to the cause, the demonstrators lack both leverage and a concrete strategy to succeed. Nevertheless, despite the violence directed at them, they are angry, relentless and determined to escalate the civil strife at whatever cost.

Seventy two years since its founding, the Jewish state finds itself a house divided, inching closer than ever to the brink of a violent civil war.