Backers of Prop 15 say Disney is paying $19.6 million less that it should in property tax on Disneyland in Anaheim. Image by Wikicommons

California is engaged in a David versus Goliath battle over wealth and inequality and a growing army of Jews is joining the crusade to slay the corporate giant.

The battleground is Proposition 15, a statewide measure known as “Schools and Communities First” (SCF) that would increase property taxes on the state’s largest corporations and raise about $12 billion annually. If California voters pass the measure on November 3, 40% of the new funds will be allocated to public K-12 schools and community colleges, with the remaining 60% distributed to cities to improve local services such as libraries, parks, housing, health care, and community colleges.

On September 10, more than 230 Jews from across California joined more than 70 rabbis and cantors to launch Jews for Proposition 15. Leo Baeck Temple in Los Angeles and Or Shalom Jewish Community in San Francisco have already officially endorsed the measure and other congregations are expected to follow suit. Some Jewish organizations, including the Pasadena Jewish Temple and Center, the Religious Action Center of Reform Judaism, IKAR, Temple Israel of Hollywood, Bend the Arc, and Nefesh have already or soon will be hosting educational webinars about the ballot measure. Jews for Proposition 15 will be sponsoring remote rallies and other activities, including get-out-the-vote drives among members of synagogues and other Jewish organizations, as well as public school parents, between now and Election Day.

Proposition 15 is designed to reform Proposition 13, which California voters passed in 1978 at a time of rapidly rising property taxes for homeowners. The law capped property taxes at one percent of assessed value for commercial and residential properties alike. Under Proposition 13, large California businesses that have owned property for a long time pay do not pay their fair share of property taxes, even as the value of their property has risen. Right now, the tax is based on the property’s market value at the time of purchase (with increases capped at 2 percent per year) even if the purchase was decades ago. Because of Proposition 13, schools and local communities have lost significant revenues every year because properties that do not change ownership are assessed at values much lower than their market values.

The result has been a dramatic decline in property tax revenues across California, which has starved local school boards and municipal governments from providing essential services. Prior to Proposition 13, for example, California had among the best public schools in the nation. Since then, however, California’s per-student spending has plummeted to 39th in the country. And when it comes to class sizes, school nurses, and school librarians, California ranks near the bottom. This is the case even though California is the fourth wealthiest state in the country in terms of per-capita income.

Proposition 15 would close property tax loopholes on the largest corporations in California, while protecting homeowners, renters and small businesses. It will bring California in line with the way other states tax commercial and industrial property. It requires commercial and industrial real property worth more than $3 million to be taxed on the basis of its current fair market value.

•The Walt Disney Company is one of the world’s largest corporations, with $70 billion in revenues and over $11 billion in profits last year. Its Walt Disney Studios in Burbank, with 1.8 million square feet, is paying property taxes based on 1975 assessed land values. If assessed on its current fair market value, it would owe an additional $3 million to $4 million in property taxes that would be used to fund public schools and essential services.

•Disneyland is one of the company’s biggest profit centers. Last year, over 1.8 million visitors came to the Anaheim resort. Last year, it paid only $4.6 million in property taxes. If Disneyland was assessed on its current fair market value, it would pay at least $24.2 million in property taxes — an additional $19.6 million to local schools and services. 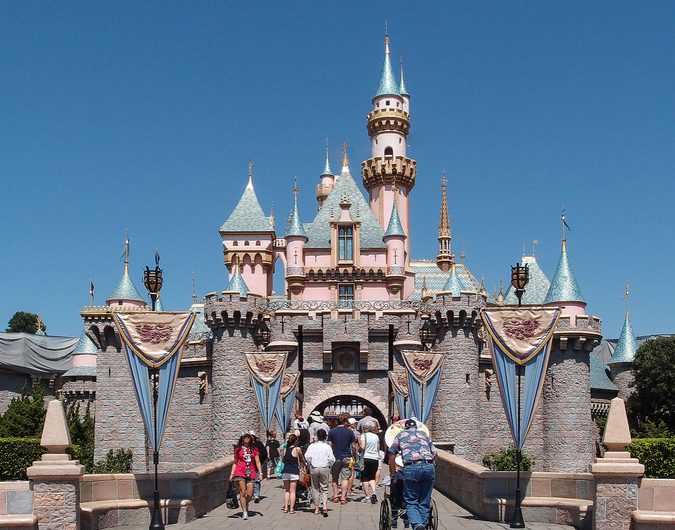 Backers of Prop 15 say Disney is paying $19.6 million less that it should in property tax on Disneyland in Anaheim. Image by Wikicommons

•Shell Oil Company, one of the world’s largest corporations with $345 billion in revenues and over $21 billion in profits, has a huge distribution complex in Carson, a city near Los Angeles. It was built in 1924 and last reassessed in 1975, so it is paying property taxes based on a dramatically out-of-date assessment. Under Proposition 15, Shell would pay an additional $4 million to $8 million each year in property taxes to benefit schools, parks, and local services.

•The Irvine Company, a giant real estate developer, generated about $1.48 billion in revenue last year, but paid only $402,000 in property taxes for its Eastgate office complex in San Diego based on an out-of-date assessment. If Proposition 15 passes, the company will pay property taxes based on its current fair market value. That would generate an additional $507,000 in property taxes every year.

•Hilton, the global hotel chain, brought in $9.45 billion in revenues last year. Its popular Hilton Santa Barbara Beachfront Resort paid only about $1.18 million in property taxes last year. If Proposition 15 passes, the Hilton’s Santa Barbara resort will have to pay property taxes based on its fair market value, which could mean $1.53 million more – over double what it is currently contributing.

•Prologis is a real estate investment trust headquartered in San Francisco that that invests in logistics facilities such as warehouses. Last year, the company generated approximately $3.3 billion in revenue. The company owns four massive warehouses in Redlands (in San Bernardino County) on which it paid about $1.96 million in property taxes. If voters approve Proposition 15 passes, Prologis will have to pay property taxes based on the warehouses’ fair market value, which could mean $1.4 million more – nearly double – revenues for schools and local services.

These are just a few examples of how Proposition 15 would fix California’s outdated and unfair property tax system. The richest 10% of commercial and industrial properties will generate 92% of Proposition 15’s roughly $12 billion annual revenue.

Jews for Proposition 15 is part of a broad coalition of unions, community organizations, faith groups and others that are mounting a grassroots effort to educate and turn out voters. Key supporters include the League of Women Voters, ACLU, the Sierra Club, the California Teachers Association, the Parent Teacher Association, the California League of Cities, the California Alliance of Retired Persons, Indivisible, California Nurses Association, Planned Parenthood, California League of Conservation Voters, the Alliance of Californians for Community Empowerment, PICO California, Catholic Charities of San Diego, Sacramento Area Congregations Together, Faith In Action, and the Service Employees International Union. In addition. Democratic candidates Joe Biden and Kamala Harris as well as California Gov. Gavin Newsom have endorsed the measure.

The supporters hope that high voter turnout for the presidential election will help the “yes” on Proposition 15 campaign.

“Passing Prop 15 would truly be transformational for our state, increasing resources for our schools and for services such as parks, libraries, first responders, mental health, homelessness and street repair. Furthermore, passing Prop 15 would be a strong value statement — this is the California we want to live in!” said Rabbi Jonathan Prosnit of Congregation Beth Am in Los Altos Hills in northern California.

“Our Jewish community is committed to contributing tangibly to combating systemic racism. Passing Proposition 15 would be an important victory for racial justice,” echoed Rabbi Sharon Brous of IKAR in Los Angeles “It aligns with our core Jewish values. And it is the highest priority of our longtime social justice partners, across our multifaith and multiracial networks.”

Reflecting on the impact on his congregation and others like it, Rabbi Ken Chasen of Leo Baeck Temple in Los Angeles noted, “Proposition 15 has the potential to be transformational for many of our temple members. Proposition 15 will make excellent public schools more accessible to our young families.”

Rabbi Jocee Hudson of Temple Israel of Hollywood explained, “Jews have always emphasized the importance of education. The great rabbinic scholar, Maimonides, taught ‘Teachers of small children should be appointed in each and every land, in each and every region, and in each and every city.’ The Schools and Communities First Act would restore funding for our chronically underfunded public schools, particularly in areas with a high proportion of low-income families.”

Jews for Proposition 15 has developed a sign-on letter for clergy who want to participate.

“In the battle between David and Goliath, remember who won,” said Rabbi Benjamin Ross of Leo Baeck Temple.

_Peter Dreier is E.P. Clapp Distinguished Professor of Politics at Occidental College in Los Angeles, a member of the Social Justice Committee of the Pasadena Jewish Temple and Center, and author of several books, including The 100 Greatest Americans of the 20th Century: A Social Justice Hall of Fame.