I accused my neighbor of stealing my snake 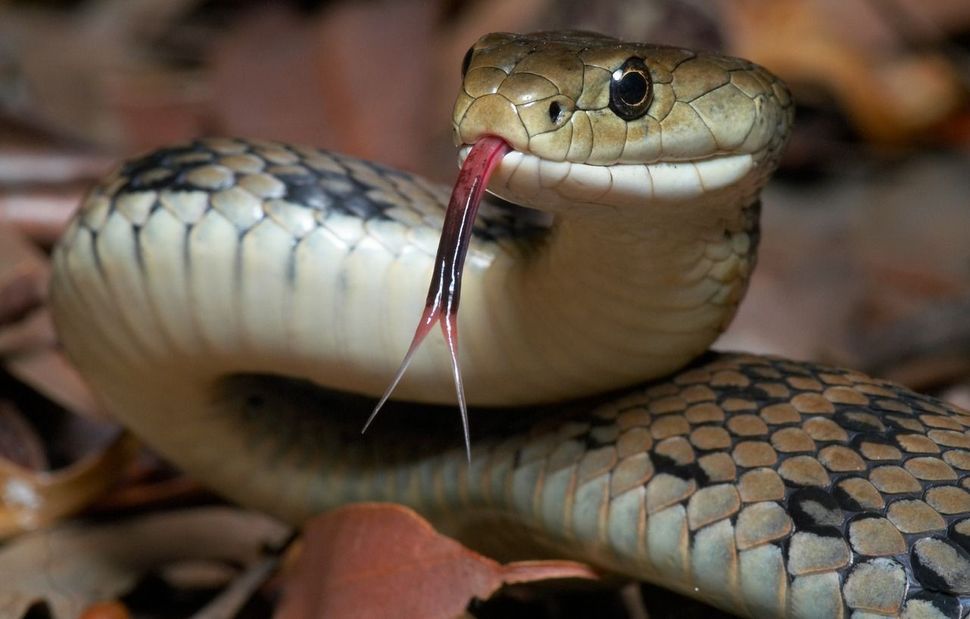 Tradition has it that King David used to remind himself, every Yom Kippur or so, of his past sins. Every Yom Kippur, whether I like it or not, I am reminded of a past sin of my own. It was one of the worst things I ever did.

I was living on a kibbutz in Israel, still learning about the ins and outs of being an Israeli. My roommate and I would go on hikes together, and he’d teach me about the land. One day, he caught a venomous viper and we brought it back to our room to put in an aquarium. We closed it with a sheet of glass and put a very heavy stone on top of it for security.

We fed it with mice or a bird that we’d catch, and even posted our feeding times on the kibbutz dining room bulletin board so people could come and be impressed.

One day, a neighbor came to talk to me, upset.

“Listen,” he told me. “My wife and I moved out into nature so we could raise our little girl away from the dangers of the city, where we could walk around barefoot. But now we can’t, because you decided to raise a venomous viper in your room. Your only safety measure for preventing that snake from escaping is a rock. That snake will escape, I promise you.”

I was annoyed at his prophesying. We ignored him, continuing to raise and feed our viper, and were quite happy with ourselves.

Then, my roommate and I went on a big week-long hike in the desert. When we returned, our snake was missing.

We looked around the room, and didn’t see it. The heavy stone was exactly where we left it, and we found no signs of breaking and entering, but we knew what had happened: our neighbor had gone into our room — everybody hid their room key in the same spot — and removed the viper.

I was furious. What about my basic rights and freedoms? What about respect for private property? Justice was needed.

I went straight to the kibbutz leadership and asked to speak at the committee meeting the next day. I was indignant. “What kind of a village are you running here? We’re supposed to be a community built on trust!” I accused my neighbor by name. “How dare he think he runs the place! I expect you all to punish him so that people can feel safe around here!”

I was furious, and when I had made my point, I got up and left as dramatically as I could.

The next day was Erev Rosh Hashanah, and my friend and I were cleaning up our room (a rare occurrence) in honor of the holiday. I picked up an old duffel bag from the floor — there was the viper.

I couldn’t believe it. My roommate carefully picked up the snake and put it back in its cage with the huge stone over it. We then watched our snake stand on its tail, and, for the next 15 minutes, push up the glass lid with the stone on top with his snout, little by little; wiggling out of what was a tiny hole, it climbed out of the aquarium and down to the floor, and slithered right back over to the duffel bag.

We looked at each other, and I cursed. This meant that man didn’t do it all, and I just dragged his name through the mud in front of the entire village council.

The right thing to do would have been to go straight back to the council and tell them immediately that I had made a terrible mistake. And, of course, apologize to my neighbor for jumping to terrible, wrong conclusions.

But that’s not what I did. I was too embarrassed.

Then Rosh Hashanah festivities were over, and it was day three of the Ten Days. I thought of how I’d approach my neighbor, where I’d meet him, how I would begin the conversation. But I didn’t do it. I thought to myself, I still have a whole entire week.

The following days were just the same. Three days left — I did nothing. Two days – nothing. And then, Erev Yom Kippur.

I knew that I had to ask forgiveness before Yom Kippur or be doomed. And yet I did nothing. The whole day went by…nothing. Kol Nidrei services were about to start. I knew I was done for — I had so many chances to fix this and yet I did absolutely nothing.

But there was one more possibility; some people come to shul a little early for Kol Nidrei in order to say a special pre-Yom Kippur prayer. I never came that early, but my neighbor did. I could get there early and catch him as he walked into shul — I’d ask forgiveness right at the buzzer!

I got ready and went into shul early; I was the first person there. I waited, and indeed, my neighbor was the second person to enter the building — we could finish this in privacy, and no one would know. And yet, as he walked right in with his tallit over his head and went to his seat, I was paralyzed.

Soon, the shul filled and they were about to open the ark for Kol Nidrei. And then the strangest thing happened. I felt like someone grabbed me by my hair and dragged me toward my neighbor, who was sitting way up front.

I didn’t want to do this — the service was starting. All eyes were focused forward and every single person in that synagogue saw me walk up to my neighbor.

I stood there and looked at him, and I suddenly just burst into tears. Big, wet, loud ones. And I said to him, out loud, while bawling: “What I did to you is the worst thing I have ever done to another person. I am so sorry! Is there any way that you can forgive me?”

I could tell that the entire congregation was watching this scene, but what could I do? I had embarrassed him publicly, and now it was my turn.

The entire ordeal felt like eternity, and his answer felt like it took 10 minutes to come. He looked me straight in the eye and said, somberly and without smiling, “I forgive you.”

And I walked back to my seat.

Ever since, I’m not sure I’m a better person, but I do know this: I give people the benefit of the doubt, and I am very careful what words come out of my mouth. And I also leave vipers alone.

Michael Even-Esh is a nature guide, teacher and outdoor educator living in the Golan Heights. He still works with snakes.

I accused my neighbor of stealing my snake