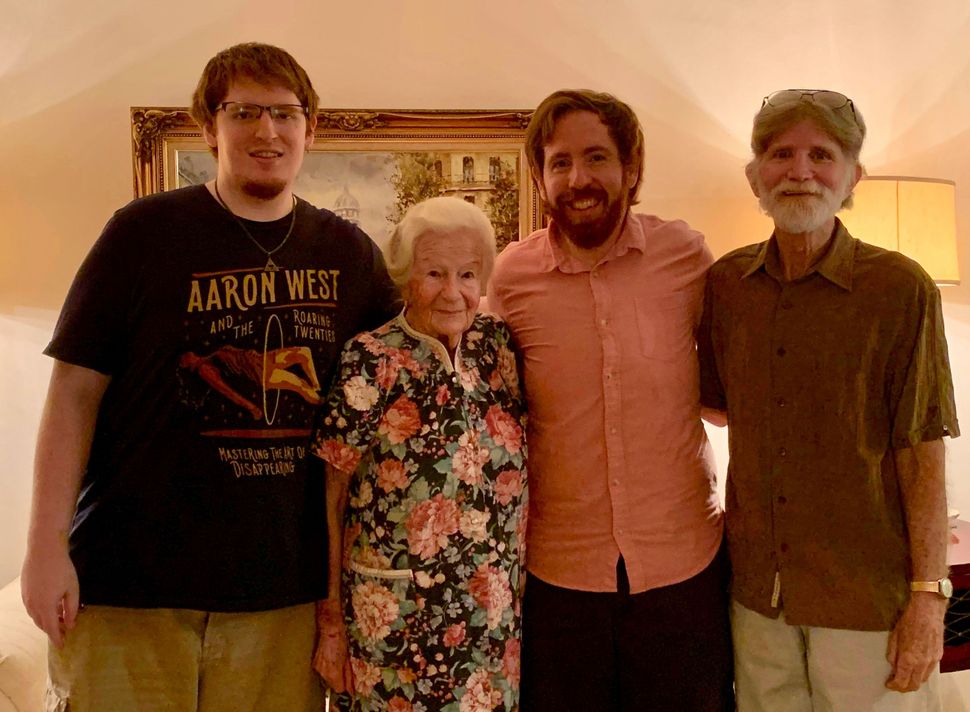 Nussbaum with her son, right, and two grandsons. Image by Ruth Nussbaum

I’d like to say a few words about Adolf Hitler, Donald Trump, and Ruth Nussbaum.

Let’s start with Ruth, who is marking her 100th birthday on September 30th, and isn’t overly thrilled with the occasion. As she told me a few weeks ago, “I wouldn’t recommend it to anybody”.

Ruth Rozanski was born in Offenbach, Germany, a few miles from Frankfurt. By the age of five she’d learned how to knit, an activity in which she finds enjoyment and meaning to this day. After her father’s untimely death when she was 11, she lived with her mother Henriette and younger sister Ellen in a building owned by an aunt; her mom and aunt managed a small store downstairs from their apartment. 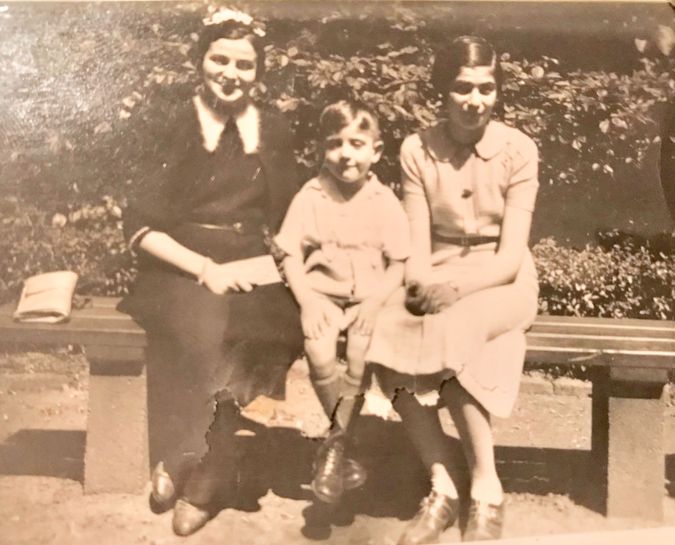 Ruth with her sister Ellen and a young cousin, taken in
Germany around 1938. Image by Ruth Nussbaum

Several months later, fearing what the ominous future might hold for German Jews, Henriette made the wrenching decision to send Ellen to safety in England on the now-legendary Kindertransport.

Ruth, however, was already past the 17-year age limit; it took another year of desperate attempts – and the help of the refugee organization HIAS – to make her escape from Nazi Germany, leaving her mother behind.

In late 1940, the 20-year-old, with only the clothes on her back, got on a train that rumbled through Russia for days, made her way to Japan, and boarded a ship that eventually docked in Seattle. Literally penniless, it took her some time to raise the one cent needed to send a postcard to relatives in New York City, who arranged through HIAS to bring her east.

In New York, Ruth was reunited with her fiancé Norbert (later Norman) Nussbaum. The couple met at a dancing school in 1935 when he was 17 and she 15; he fled Germany separately, and they married in 1942.

I am familiar with Ruth’s saga because Norman was my mother’s cousin, and our two families lived near each other for decades in Queens, NY.

After World War II ended, Ruth discovered that her 55-year-old mother Henriette had been murdered in Treblinka.

In 1956, tragedy struck again, when the older of Ruth and Norman’s two sons died of leukemia at the age of nine. Although never fully recovered from that heartbreak, the Nussbaums carried on, moving to Delray Beach, Florida in the 1980s; Norman passed away in 1993.

In the years since being widowed, Ruth has kept busy by knitting blankets and hats for hospitalized children with cancer. Still living alone in her own home, she creates a blanket a day, and has been recognized several times for her remarkable charity work. She enjoys visits from her surviving son and two grandsons, as well as the children and grandchildren of her sister Ellen, who died in 2018.

One might think Ruth could look back with some sense of contentment and comfort at a lifetime of triumph over tragedy, but that’s not the case. In our recent conversation, she lamented the nation’s current crises, saying “I’ve seen a lot in my 100 years, but I don’t know why I had to stick around for all of this. It’s awful”. 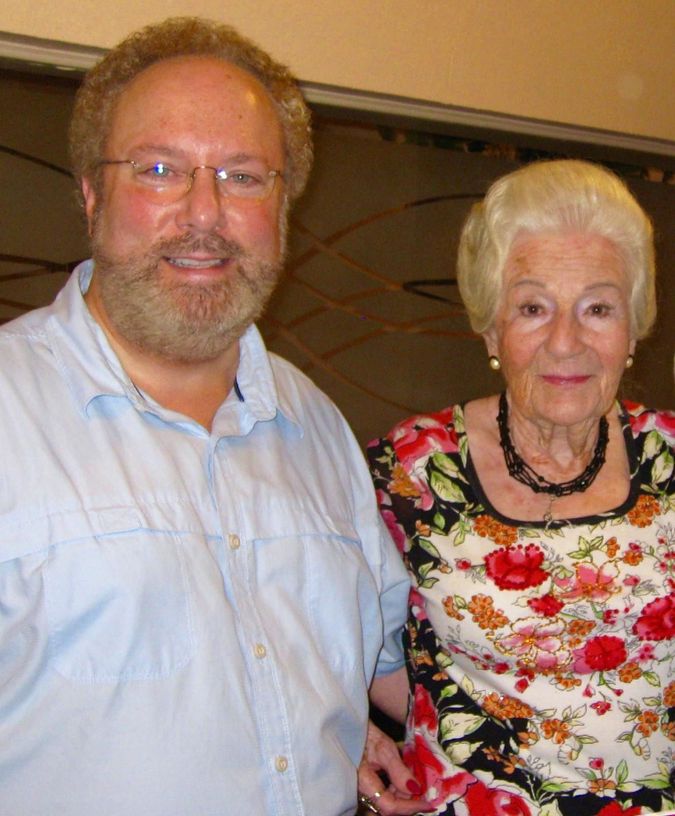 Nussbaum and North in 2016 in Delray Beach, FL. Image by Ruth Nussbaum

Her pessimism has grown since 2016, when we met at an Italian restaurant for dinner during the presidential election campaign. After sharing joyful memories of my parents’ wedding and gossip about various relatives, Ruth turned to politics.

The woman who was forced to listen daily to Adolf Hitler’s lunatic rants on the radio for seven years in the 1930s was blunt: “When I hear Trump speak, I hear Hitler again. When I see his rallies, it’s like what I saw in Nazi Germany”.

I pushed back against Ruth’s emotional comments. As a journalist who has interviewed dozens of survivors and reported extensively on Holocaust-related topics, and as the son of a mother who escaped the Nazis and a father whose aunts, uncles and ten first cousins were murdered by them, I have long believed that nobody and nothing can or should be compared to Hitler and Nazism.

The slaughter of six million Jews has been used and abused far too often by those who have no concept of its mechanized magnitude, from PETA (People for the Ethical Treatment of Animals) on the extreme left, to evangelical Christians on the extreme right. Its unfathomable evil has been cheapened by pop culture references to “soup Nazis” and sitcom jokes about Anne Frank.

So I told Ruth in 2016 I thought she was exaggerating, that the Holocaust was an event unique in its horror, that the unhinged diatribes of Donald Trump, as racist and moronic as they might be, were not equivalent to genocide.

Four years later, I’ve come to realize Ruth is right. Donald Trump still is not the Adolf Hitler of 1944. But he legitimately can be compared to the Hitler of 1934 – and that, perhaps, is by design. Legal filings from Trump’s first divorce revealed he owned and studied a book of the Führer’s early speeches. A new analysis by prominent civil liberties attorney Burt Neuborne cites twenty ways Trump’s words and actions are similar to those of Hitler in the early years of the Third Reich, from the attacks on mainstream media and objective truth to huge rallies, mass detention, ultranationalism and demonization of all opponents.

In recent weeks, as early voting begins, Trump has repeatedly refused to commit to a peaceful transfer of power if he loses in November. This is no surprise to Ruth, who told me earlier this month that “Trump is like a dictator. He’s crazy like Hitler was”.

Despite the barbed wire and caged children, a detention center in Texas is not Dachau in Bavaria. But when an eyewitness such as Ruth Nussbaum with a century of wisdom and lived experience warns us of the similarities, we ignore her at our own peril.