The author. Image by Bence Illyés 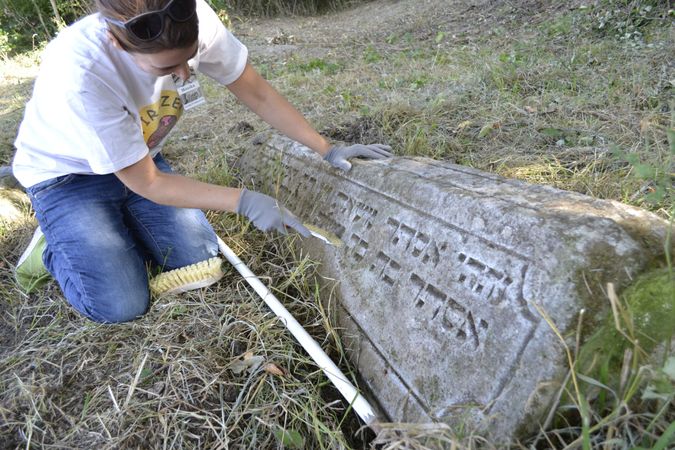 A volunteer cleans a grave in Tallya Image by Bence Illyés

I found the Tállya cemetery, located kilometers away from the village of Tállya, in northeastern Hungary, by chance. I am a Christian scholar researching Jewish culture, and I have been photographing Hasidic pilgrimages in nearby Kerestir, Olaszliszka and Sátoraljaújhely and elsewhere for years. I often visit the area, and discovered the cemetery thanks to a lucky coincidence.

When I was there, I was saddened by the careless, horrible condition of the otherwise beautiful carved tombs, the sight of the fallen tombstones and the weeds. Nature had been slowly taking over the cemetery for years, and it seemed as if someone didn’t do something about it, the cemetery would become uninhabitable. 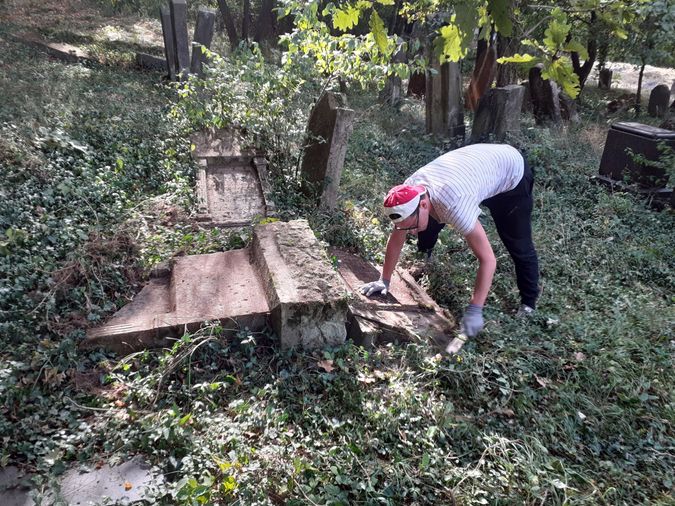 I organized an event to tidy up the almost unknown cemetery, organizing cooperation Jewish and non-Jewish volunteers to work together to tidy up the cemetery and save it from destruction.

At the same time, I wanted to use the action to raise awareness of this fast-disappearing history and establish a movement to save Jewish cemeteries in Hungary; unfortunately there are more than 1,000 historic and abandoned rural cemeteries in Hungary that no one takes care of or visits. In many places, including Tállya, the Jewish cemetery is the last surviving monument from the once thriving Jewish community. 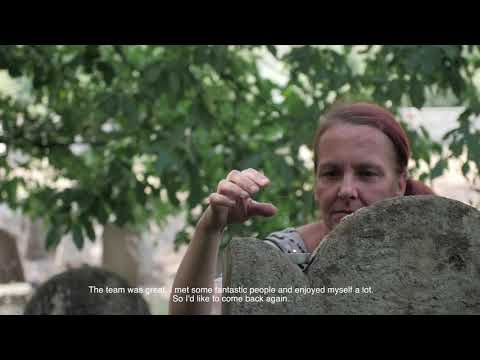 Without the cemetery, since the synagogue and the mikveh remain, there is no sign today that Tállya was once a flourishing Jewish community. It was home to two major rabbis, Rosenbaum Gerhon (Moshe Leib Segal Lits, the author of Mesiv Devarim) and his son, Rosenbaum Moses (Moshe Hajim Lits). More than 300 people were deported from Tállya during the Shoah.

Together with the volunteers participating in the project, we believe that tidying up an abandoned cemetery and nourishing our past is an important, binding task for society as a whole in today’s Hungary. It is important that we nurture the memory of the Jews who once lived here, and that not only the Jewish community, but society as a whole, takes on the task. There is still a lot of work to be done in this area, as there are numerous Jewish cemeteries with a similar fate, and the memory of the Jewish culture and religious diversity they represent will fade away without care. 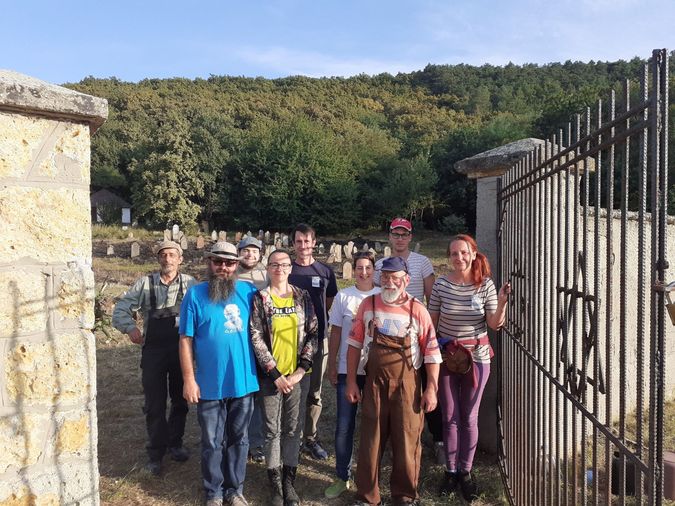 The volunteer group at the cemetery. Image by Bence Illyés

Luckily, the volunteering event had more than 20 enthusiastic civilian helpers, mostly non-Jews, who came from Budapest with good intentions and humanitarian kindness, to save the Jewish cemetery in Tállya during a four day operation. Grants for the project were obtained through a crowdfunding campaign, which has fantastically had more than 140 foreign supporters so far, alongside a few individuals from Hungary and the local government of the town. We are all grateful for their contributions. During the renovation of the cemetery, the volunteers mowed the chest-reaching grass, pruned the trees, which were becoming increasingly dangerous, and cleaned the graves overgrown with weeds. tWe even found very special and rare, Sephardic-type lying graves that were previously hidden, and which are a real surprise in this area.

To continue the project in October, where the cemetery will be tidied up, we would like to involve even more Christians people and institutions, because we feel it is important and worthwhile for non-Jews to partake in saving a Jewish cemetery. The country’s Jewish heritage is as much part of the Hungarian culture, history and national values as the Rubik’s cube, the ballpoint pen or the goulash soup.

The author is looking for people who have ancestors in Tállya (טאיה); if you do, please email him at [email protected] If you are interested in their work, visit their Facebook and Instagram for more information.

The author. Image by Bence Illyés

Bence Illyés is an activist, photographer, journalist and Jewish studies researcher born in Budapest, Hungary. Though Christian, he holds a B.A from the Jewish University of Budapest. Later on he continued his studies at Paideia The European Institute for Jewish Studies in Sweden and at The Lund University. His photo exhibition is traveling around the country now with the support of the US Embassy of Budapest.

His independent, civilic, volunteer project for saving the Jewish cemetery of Tállya is the first step of his long-term project plan that will try to restore and save other rural, historic and abandoned jewish cemeteries as well in Hungary, with the help of volunteers.