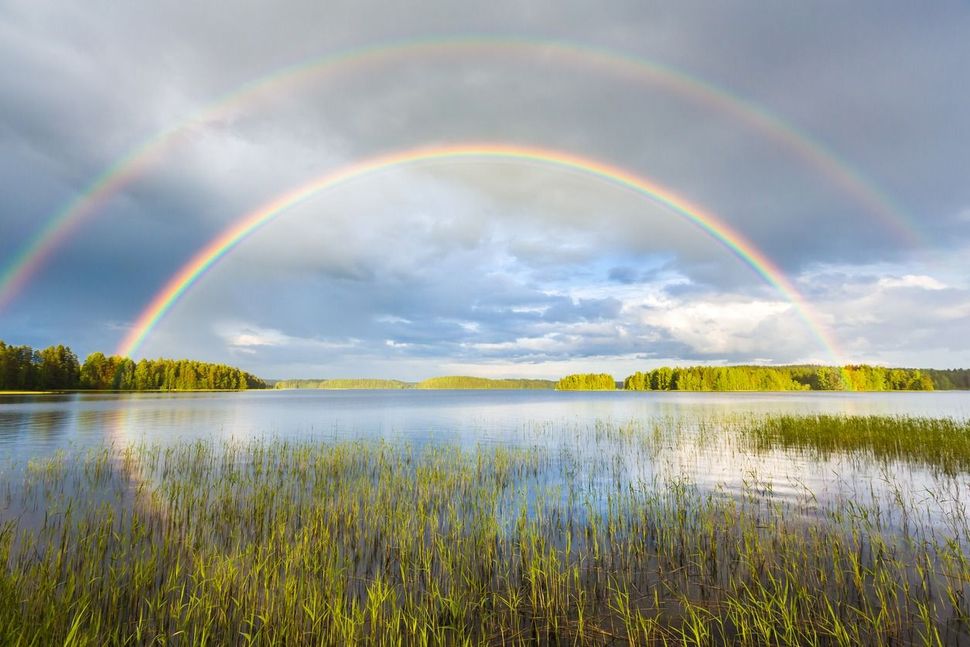 The Torah inherited a Mesopotamian cultural consensus that a Great Deluge had wiped out almost all of humanity. In the Gilgamesh epic, the gods (Anu and Enlil) inflict this catastrophe arbitrarily in a display of their power, but later defend their actions both as deserved punishment and designed to curb population growth. According to the older epic, Atrahasis, Enlil, and the gods are troubled by the rapid growth of human population and offended by the noisy, raucous human behaviors. They use the flood (and then shortened life span) to drastically reduce human presence on earth.

Rearticulated through the Torah’s revelation, the Flood is explained to have been inflicted because of widespread human wickedness, especially violence and oppression. God, who wanted Earth to be a living paradise of justice and peace, is so disappointed and angered as to undo the initial Creation and try again. The Lord decided to wipe out the corrupt human race and renew humanity, building it on righteous Noah and his family.

But the crucial departure and revolutionary moral path of the Torah is expressed in the day after the Flood — which may well be the most transformative religious moment in Judaism’s history. God pledges never to inflict such a catastrophe again.

Attributing a cataclysmic flood to willful action by God would define the Lord as a perfectionist who cannot tolerate the flawed and wayward human acting badly, and so rejects the world and starts again. Alternatively, such a flood would reveal God as a punitive Ruler who ruthlessly wipes out those who disobey divine instructions to be good.

Instead, the Torah reveals that God is a loving Lord who is deeply distressed at the sight of widespread devastation and death. To wipe out people for the sin of disobedience and violence is so coercive that even if people do the right actions thereafter, there is no dignity or genuine morality in their behaviors. A loving God wants people to be good out of free will and love of others. Therefore, God permanently renounces the threat of inflicting catastrophe: All powerful but loving God self-limits and offers humanity a covenant, or partnership.

In this committed partnership of love, humans will join with the Divine in building a better world and filling it with life. But they will do so out of free choice, not out of terrorized submission to divine dictates. In the covenant, there is full allowance for human weakness in the form of lower, “compromised” expectations — at least along the way to the final goal. Even bad behaviors are provided for by mechanisms of repentance, milder punishments, and divine forgiveness.

God still wants Creation and society to be perfected. However, God loves humans and wants them to mature and become images of God — that is, independent creatures who are infinitely valuable, equal and unique. God wants humans to live lives of dignity and creativity in partnership. That is more important than humans building God’s desired paradise while living lives of robotic conformity to divine instructions.

In entering a covenant, omnipotent God self-limits, out of love, to allow humans their freedom and the chance to grow into full dignity. How?

First God establishes the natural order as an independent and irrevocable process, never to cease or be disrupted (Genesis 8:22). The Talmud explains: Olam ke-minhago noheg, the world follows its custom (Avodah Zarah 54b). The objectivity of the natural order means that nature will not differentiate between stolen and honestly acquired seeds — both will germinate. The sperm of adulterous intercourse can conceive a child just as much as sperm emitted in moral or legal sexual relations. Nature will not hound or punish those doing evil.

In God’s world, humans freely choose to do good or bad. By choosing to do good, humans exercise — and earn — their freedom. This means that God upholds human freedom (with the risks of bad behavior) ahead of obedience or guaranteed preferred outcomes.

The divine self-limit means that humans must pick up the slack in repairing the world. Rather than confer a paradise by miracles, God binds God’s self to depend on human actions to complete the world. By making the divinely desired outcomes dependent upon human behavior, God enables human freedom. People must participate in their own liberation; if paradise is simply bestowed, humans are likely to remain dependent, like spoiled children, rather than repair their own world and become mature masters of their own fate.

The covenant mechanism protects against the two most widespread pathologies that flow from the human encounter with God. One is to neglect this world — or even allow it to rot — and instead pray for God to upgrade it miraculously. The other is to turn to God and to ritual life in order to escape from this world, with its challenges and burdens, into the timeless heavenly realms.

The covenant tells humans that they have a companion or partner or helper, but that they must do their share. They must fulfill their commitment by creating life and doing good in this mortal realm.

Our parsha illustrates the covenantal method of working for tikkun olam, the repairing of the world. Out of deference to human needs and nature, society takes small and compromised steps toward the ultimate goal. The ideal diet of the Torah is vegetarianism; no creature should live by taking the life of other creatures. In the Garden of Eden, all living animals, including humans, were vegetarian (Genesis 1:29-30). However, after the Flood, allowing for human hunting for food and human need for protein, permission is given to eat meat. (Genesis 9:3).

The covenantal goal of a final peaceful world is upheld by restricting meat eating. All humans are prohibited from eating blood. Blood is seen as the carrier of life (Leviticus 17:11). The prohibition is a reminder that the ideal remains not to take another life. Not consuming blood is humanity’s acknowledgment that it is “violating” the sanctity of life — out of necessity. The prohibition goads people to try to ultimately reach the vegetarian ideal.

It is noteworthy that Noah’s covenant includes a warning not to shed the blood of humans. (Genesis 9:5-6). This is an acknowledgement that compromising with nature and culture by permitting the killing of animals raises the risk of humans acting out their hunting instincts on people. There is an implied moral risk in every compromise of the ideal. There is a price in accommodating human beings and the status quo.

Our parsha concludes this account by reminding us of the goal of this partnership with God: It is to fill the world with life and so upgrade the world as to enable people to live abundantly — not constrained, not deprived, not reduced, but rooted and flourishing (Genesis 9:7).

Postscript : The covenant with Noah is a universal covenant with all of humanity (and other living creatures, see Genesis 9). This covenant has not received that much attention in Jewish tradition, certainly not as much as the particular Jewish covenants such as with Abraham, at Sinai, or on the plains of Moab at the end of Moses’ life.

The Noahide covenant supplies the model in the Torah of covenantal process. This model shapes our understanding of all the later laws and the rest of the Torah.

I believe that all subsequent covenants — not just with the Jewish people but, I argue, those made with other non-Jewish covenantal communities as well —are based on and draw authority from this Noahide covenant.

I call on the prophet Isaiah to back up this view. When the exiled Jews returned from Babylonia, they were wracked with religious concerns. Maybe God had rejected the covenant with Israel and, therefore, allowed the destruction of the First Temple and the exile of Jewry?

Isaiah assured them this was not so. He tells them: Just as God’s covenantal pledge not to allow another Deluge was self — evidently unbroken — it was operative and irrevocable — so they should be assured that God’s covenant with Israel would never be withdrawn (Isaiah 54:9-10). In other words, the manifest validity of the Noahide covenant and the ongoing natural process is our assurance that our particular covenant is ongoing and eternal.

Rabbi Yitz Greenberg is the Senior Scholar in Residence at Yeshivat Hadar.