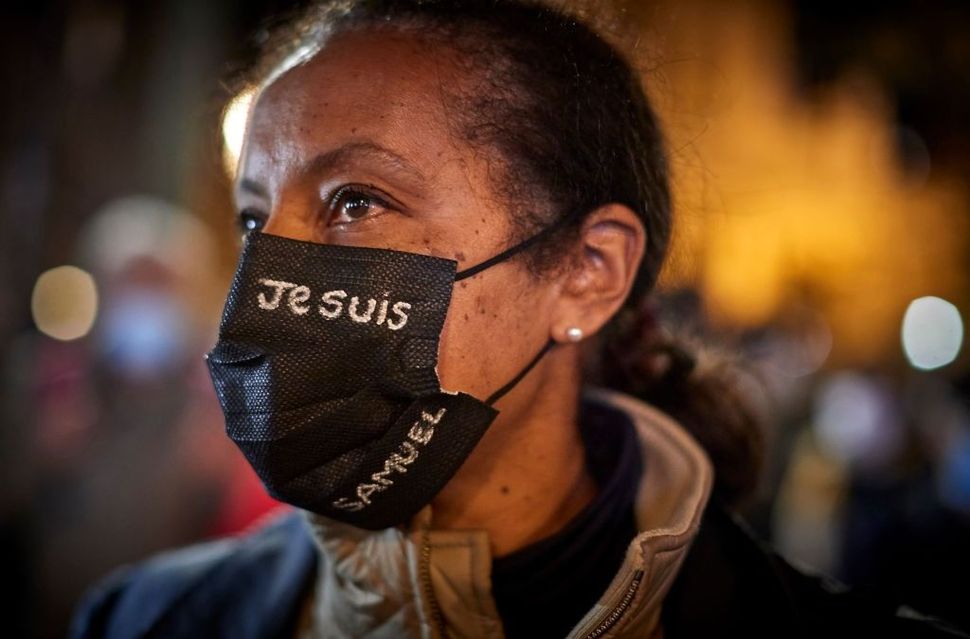 A woman at France’s national tribute to a murdered teacher, Samuel Paty. Image by Getty Images

On Friday, an 18-year-old Chechen immigrant beheaded a history teacher just outside his school near Paris for the crime of showing his class caricatures of the prophet Muhammad in a course about freedom of expression. Just two weeks ago, after two people were stabbed in a different terrorist incident, President Macron gave a long-anticipated, lengthy speech taking a hard line on combating violent Islamic extremism in France. Alas, it clearly didn’t quite do the trick.

As a senior in college and a religious Jew, I have been pondering this problem of religious violence in a philosophy class called “The Enlightenment and its Critics.” It is strange to sit here in 2020 and read about the ambitious 18th century European philosophical project to transform society and achieve progress through reason, science, and religious tolerance. What would they think of our society today, where I have a computer and more appliances than I can count, but my friends in New York still report routinely hearing antisemitic slurs (and worse) on the subway?

Recently, our class has been discussing Nathan the Wise, a play written by Gotthold Ephraim Lessing in 1783. The work celebrates religious tolerance, imagining a world in which Christians, Jews, and Muslims can (finally) live together in peace. It has been a beloved part of the German literary canon since its publication and an influence on the movements for secularization and toleration that now pervade Western Europe; its lessons remain as relevant now as they did in 1783.

The plot of the play is winding and dramatic, as a Jewish merchant named Nathan befriends a Christian knight who saved his daughter’s life and then gives advice to a financially-stricken Sultan. Along the way, all three characters learn to set aside their religious differences by recognizing the common humanity they share and the fundamental ethical behavior that lies behind all faiths. As Nathan says to the knight, “there are good human beings in all lands… differences in color and clothing, in form… those differences don’t mean much.”

This theological point about universal humanity overriding religious difference is elaborated on at length in a “parable of the rings” that Nathan the Jew shares with the Sultan, who asks him which religion he thinks is true.

Nathan tells the story of a ring with special powers to make its wearer beloved to God and mankind. When a father with the ring has three sons and can’t choose which one to give it to, he makes copies of this ring and gives those to his sons. They are furious, until a judge reassures them that the whereabouts of the original are not important since all of the rings are essentially the same. And besides, fighting over a ring won’t make you beloved to God anyway.

The lesson of the parable, the Sultan quickly realizes, is that our inherited religions are like the rings — they are all near-identical copies of an original truth. Most crucially, it doesn’t really matter which one is the original since they all have the power to make us better people.

The end of the play, unsurprisingly, yields unity and brotherhood — literally. The final scene has the Christian knight and Nathan’s adopted daughter discover that they are the long-lost children of the Sultan’s deceased brother. Everyone is astonished by this news, and Lessing’s point hits home: in order for us to get along, we would have to treat people of other faiths as if they are truly family.

Fast forward to 2020, two and a half centuries later. Religion has not gone away, and as modernity has progressed, religion is now being used as a powerful force for radicalization. As Muslim refugees from across the Arab world have found a home in Western Europe in record numbers, the clash of cultures has boiled over.

In his play, Lessing offers us an idealistic model of how people of faith might work out their differences by acknowledging our essential equality and shared truths. We have made enormous progress in the last 200 years in easing inter-Christian tensions and granting Jews throughout the West equal rights and respect. But as the world grows more connected, and people of vastly different backgrounds are thrown together, this grand project will become harder to sustain, and demands an infusion of good ideas and constructive action.

Avowedly secular, post-Christian Western Europe was once a bastion of Lessingian tolerance, but a history teacher was just butchered in Paris. I’m not exactly sure how to prevent that, but I’m pretty confident our terrorist wouldn’t have been convicted by a parable about rings and a rousing speech that deep down, we are all the same.

Unlike Lessing and Enlightenment reformers with big dreams, my instincts tend toward admitting ignorance and setting more attainable goals. It will take a long time before France arrives at the kumbaya moment with which the play finishes. True wisdom would mean acknowledging that this problem is hard and that no matter how enlightened we think our society is, extreme forms of religion will continue to disrupt our hopes for a perfectly peaceful world.

Michael Weiner is a college student.