Despite everything, poll-watching in Trump country gives me hope 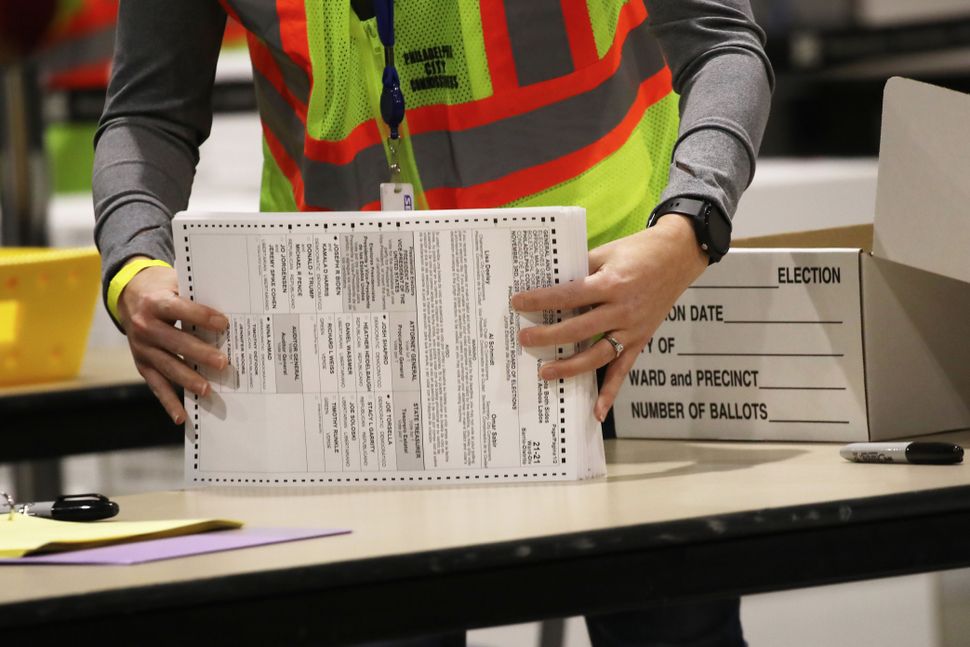 A poll worker in Pennsylvania. Image by Spencer Platt/Getty Images

Much about this year’s election has been disappointing, even disheartening, with incivility and hatred dominating the discourse. But I can say that my experience standing outside a polling station in a very blue-collar corner of a bellwether district gives me some hope that neither our election system nor the social fabric of this country is irreparably broken yet.

As a life-long liberal, and a genuine fan of Joe Biden, I felt compelled to do something to help him in yesterday’s election. Not just to vote or donate money. I wanted to be a foot soldier, and make a tangible difference. Hearing constant chatter about voter intimidation and snafus, I signed up with the Pennsylvania Democratic Party to be a ballot site observer in what was shaping up to be a literal keystone state.

Asked to select a polling station preference, I requested Bucks County, north of Philadelphia. I knew it would be among the swingiest districts in the state – and also a reasonably easy drive from my home in Brooklyn.

I was assigned to report to the Ancient Order of the Hibernians’ lodge in the town of Bristol – a place I had never heard of, from whence none of my friends, relatives or colleagues hailed. A quick look on Google Street View made it seem like a less-than hospitable place for a liberal Jewish professional from New York City. Ramshackle. Run-down. Rust-belt. The nearest synagogue of any denomination was several towns away. The Main Line this was not.

In the run-up to Election Day, the “Voter Protection Team” training sessions and written materials warned observers about unlawful electioneering by Republicans within polling stations, about individuals trying to harass voters or our side’s volunteers and even about intimidation by local law enforcement. We were cautioned to avoid confrontations with picketers, protesters and gun toters. (Pennsylvania is an “open carry” state). Your role, they instructed, is only to answer questions, monitor the situation and report any concerns back to headquarters.

Meanwhile, there was talk of civil unrest. There had been unruly protests in Philadelphia. Shops were boarding themselves up. Even some liberal professionals I knew were looking into purchasing guns. A friend of mine doing similar work in Ohio told me he was writing his own name and family contact information on his arm with a marker before he headed out to monitor polling stations. “Please be careful,” my wife implored me. No one knew what might happen.

On Election Day, I reported to the Ancient Order of Hibernians’ lodge at 6:30 a.m., half an hour before the polls opened, per my instructions. A block-long line soon formed.

As I expected, there were plenty of obvious Trump supporters. Many older white people. I saw MAGA gear. I saw pickup trucks with all manner of stereotypically right-wing bumper stickers. A Republican state assembly candidate and her husband showed up to hand out campaign materials. Thanks to the wonders of my smartphone, I quickly learned that she opposes abortion rights, and that her husband has written a book titled “Jesus Only Speaks The Truth.” They were soon joined by several other Republican volunteers. I felt tense.

But over the course of 13 hours standing outside that polling station, I did not witness anything other than democracy at work. I learned that Bristol has a large African-American community, as well as being home to many professionals who work in Philadelphia, and many people from both groups showed up to vote too. White, Black, and Hispanic people of all ages and backgrounds mingled politely; I sensed no racial tension, heard no political arguments, nor witnessed anything approaching intimidation.

The Republican campaigners who arrived stayed out of the prohibited electioneering zone near the entrance to the polling station and were unfailingly cordial to everyone – they chit chatted with me throughout the day amicably, and even offered me some of their food and water. When they heard I was a volunteer and where I was from, several remarked how much they loved New York. No lawn signs nearby were disturbed.

The election workers were friendly and competent, everything ran smoothly, and by about 8 a.m. the line had disappeared. Although many people showed up throughout the day, nobody waited more than a few minutes to vote. Every voter leaving the building with whom I spoke remarked on how smooth and easy the experience had been.

At least in one small corner of America, politeness, decency, tolerance and civic participation were the order of the day. It was encouraging to behold.

Daniel Kirschbaum is a Queens-born attorney who specializes in employment law. He served in the IDF. He is married to the Forward’s senior news editor, Helen Chernikoff.

Despite everything, poll-watching in Trump country gives me hope