I grew up with Jonathan Sacks. What his loss means for the Jewish world. 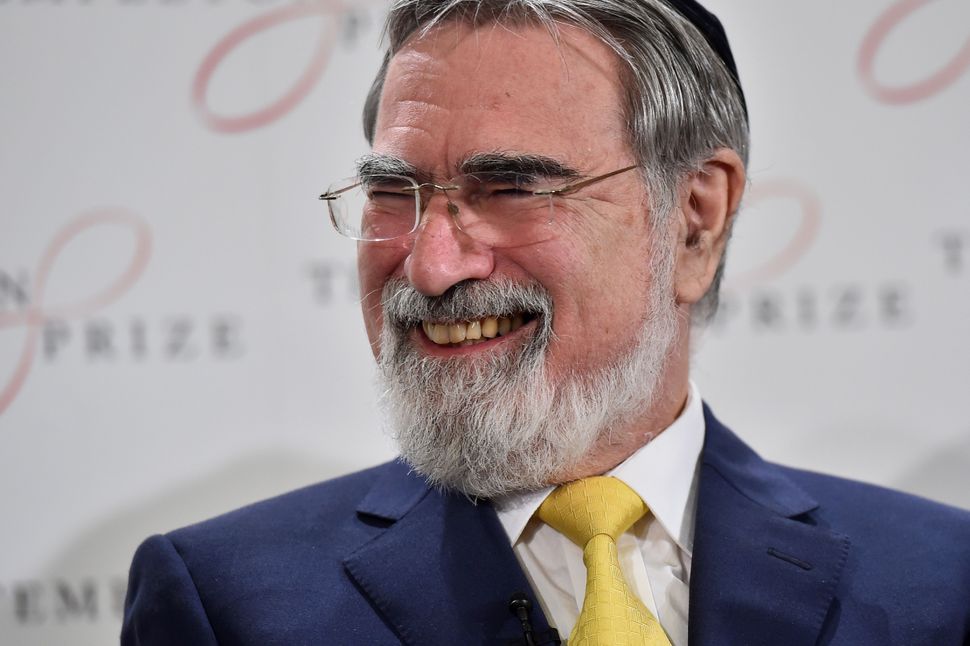 On Saturday, Vice President Joe Biden won enough of the electoral college to make him next president of the United States. But Saturday will also be remembered as the day the Jewish world lost a spokesman the likes of which it has not seen in generations: Rabbi Lord Jonathan Sacks, Baron Sacks of Aldgate, was niftar.

I’ve known Rabbi Sacks all my life, and his eloquence and media presence were inspiring. But his true legacy was in giving Modern Orthodoxy a legitimacy and expansiveness it has been losing in the face of the haredi world’s increasingly narrow focus. It was this influence, both inside and outside the Orthodox world, that will be most missed.

Born in London in 1948, Sacks’ mother hailed from the illustrious Frumkin family of learned scholars. He attended my shul in Finchley Central, and I remember my father calling Jonathan to the Torah — “Ya’amod Ya’akov Zvi ben David Arieh!” — on his Bar mitzvah. My father was the gabbai, and Jonathan’s father one-time president. The shul was structured with pews facing each other in front of the bima in the Sephardi custom. Sacks’ father sat opposite my father, which aptly reflected their different views of Judaism: one a product of a rather pompous British United Synagogue (his father), the other a survivor, a continental gentleman’s Oberland view of Yiddishkeit (mine).

Jonathan went to Christ College while I attended the Hasmonean Grammar school for boys. At 14, I befriended him, and we would meet on Shabbat afternoons to debate Jewish philosophy with a number of others. These afternoon sessions would last for hours, and no matter what topic we began with, we inevitably returned to the same central theme: theodicy and the Holocaust. Already then, our own distinct approaches to Judaism began to emerge, mirroring the way our fathers were on opposite sides of the shul, yet still facing each other.

After school, Jonathan went up to Gonville and Caius College, Cambridge to study philosophy. But he had a sudden change in philosophical direction after a trip to New York and a meeting with the Lubavitcher Rebbe. He then pursued Jewish Studies at Jew’s College in London, and a year of study in a yeshiva in Israel. He became the rabbi of the Golders Green synagogue in London’s most Orthodox neighborhood in the late 70s and then rabbi of the Marble Arch synagogue in central London, before becoming the U.K.’s chief rabbi in 1991, a position he held until 2013.

And he continued to be recognized; he was knighted by Queen Elizabeth II in 2005, and awarded a Life Peerage in the British House of Lords in 2009, making him Lord Baron Sacks of Aldgate. Prime Minister Tony Blair called Sacks “an intellectual giant” and presented him with a lifetime achievement award in 2018.

Sacks’ impact has undeniably been enormous. He was among the world’s leading exponents of Orthodox Judaism for a global audience. His views were enlightened and informed by classical Jewish medieval philosophy, Maimonides, Yehuda Halevi and Saadia Gaon. He was deeply influenced by the Lubavitcher Rebbe, Rabbi Menachem Mendel Schneerson, who Sacks called “one of the greatest Jewish leaders, not just of our time, but of all time” and who he felt had called him to join Chabad’s outreach mission for “missing Jews.” He was also deeply influenced by Rabbi Joseph B. Soloveitchik, who Sacks credited with the insight that “Jewish thought and Jewish practice were not two different things, but the same thing seen from different perspectives.”

Perspective was key for Sacks, who, like all other chief rabbis, had an untenable position navigating the wide spectrum of British Orthodoxy. He frequently found himself torn between the lackadaisical observance of most of the United Synagogue membership (what would be considered right wing Conservative in the U.S.) on the one hand and the post war influx of stricter observant Jews on the other.

That tension would be reflected in his views, as when in July 2012, a group of prominent British Jews criticized Sacks for opposing plans to allow civil marriage for gay couples. But he also faced criticism from fellow right-wing Jews who often referred to him as the “the chief rabbi of the goyim,” a slight referencing how comfortable he seemed in the company of royalty and other world leaders, at the expense of more relevance within the Jewish community.

They were wrong. His writing kept open an expansive space within the stricter Orthodox realms, even as other leaders have spent the past decades narrowing their lens.

But I, too, had my disagreements with him, despite having grown up in near-identical spiritual incubators in post-War London. Sacks followed a classical path based on a traditional, philosophical, rational view of Judaism. But a part of me was never able to leave the question of theodicy behind; my father’s experiences in the war loomed too large. For me, the post-Holocaust world could never be a rational one. I resisted Sacks’ reconciliation of science and Judaism, rational philosophy and Jewish thought, moral agency and neurobiology.

I have over the years found myself more moved by the mystical and mythical strands of Kabblah and Chassidut that focused on the experience of the divine, as opposed to the more medieval approach, which focuses on knowledge of God. Kabbalistic texts were a kind of healing for me, obsessed as they were with the impossibility of resolving the problem of evil in the world. Instead of a resolution, these texts proposed the mythic notion of an intra-divine rupture which required mankind to heal it through Tikkun Olam. This fit better in a world where God appeared absent. Talking in the name of God was for me an embarrassment.

But Jonathan Sacks never stopped providing me with the most articulate version of the view I did not share — the view of a rational Judaism. That is what his loss signifies most to me on a person level, that sparring partner from all those years ago who I was able to follow in his writings all this time. The loss is immense, for me and for the people he led.

Julian Ungar-Sargon is a practicing neurologist. (He is also the father of the Forward’s Opinion Editor, Batya Ungar-Sargon.)

I grew up with Jonathan Sacks. What his loss means for the Jewish world.