Jonathan Sacks was a beloved leader. Yet his stance on marriage captivity belied his ethics 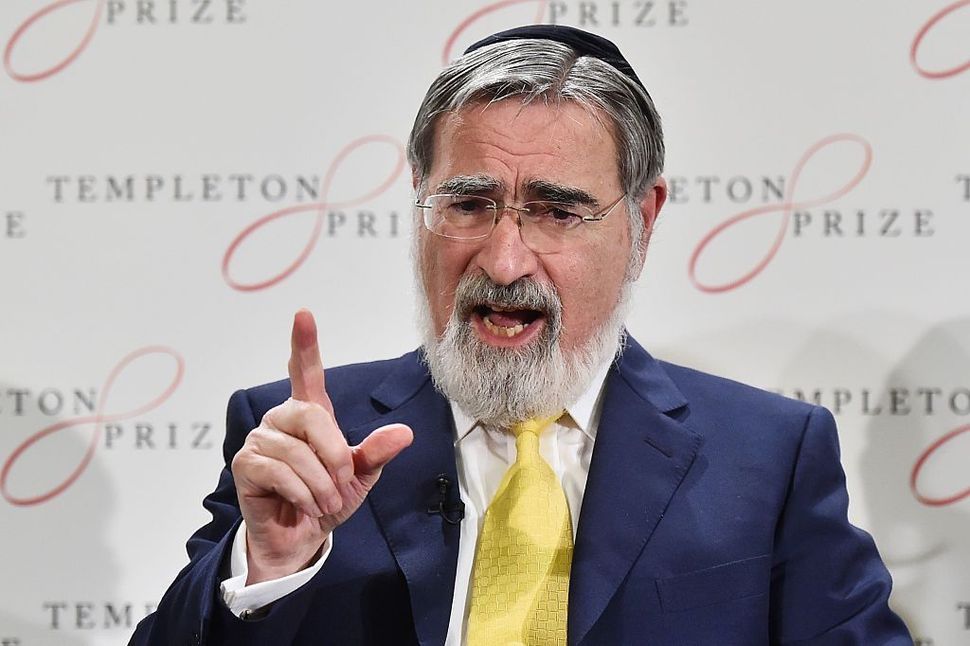 The Jewish world is still absorbing the news of the passing of Rabbi Jonathan Sacks, z”l, former Chief Rabbi of Great Britain, and for many, an inspiring religious leader.

Sacks came to represent modern Orthodoxy, which he never wished to do, preferring instead to speak for a humanistic, yet halakhic, Judaism as a whole. Yet, in his assessment , Anshel Pfeffer notes the “contradictions,” of Rabbi Sack’s life. His background as an erudite, Western-educated man got him into trouble with those on his rabbinic right, who impugned his credentials.

Sacks attempted to compensate for this perceived weakness and assert his Orthodox legitimacy through such acts as shunning the unaffiliated Limmud gathering of Jewish learning, as the ultra-Orthodox establishment does, because people affiliated with Reform and Conservative Judaism teach there. Rabbi Sacks also sought to demonstrate his Orthodox credentials on the issue of women assuming authoritative roles in Judaism, arguing that women are neither fit for, nor need “authority” (samchut), since they can exercise “leadership” without this. Left unanswered was the question of why this same formula does not apply to men.

Rabbi Sacks was known for his passion for ethics, expressed in dozens of works. But the gender stereotyping and circular reasoning which the above example expresses is but one case that raises troubling questions about selective morality when it comes to women in the application today of rabbinic law, halakha — the legal system to which Rabbi Sacks was committed and which he defended passionately. We also see that conflict in another position that Rabbi Sacks took, on the problem of Jewish marital captivity.

Halakhic marriage is a unilateral act, performed by the groom, in which he lays exclusive and non-reciprocal claim to his wife’s sexuality and reproductivity. Since the marriage is enacted unilaterally, divorce is also the husband’s prerogative to grant or withhold. Women who seek a rabbinic divorce, a gett, and whose husbands refuse, are in marital captivity until and unless the husband consents, often, after extortive payoffs. Such women are termed agunot, from the Hebrew word for “anchor.”

Some years ago, several Orthodox rabbis in the US and in Israel — Rabbi Emanuel Rackman, z”l, and Rabbi Moshe Morgenstern — established courts in which Jewish marital captivity would end. Using a variety of established halakhic expedients, they freed hundreds of agunot. They also expanded one such expedient, mekah ta’ut — an agreement which voids the marriage agreement retroactively — to include physical or mental abuse, including gett refusal, as grounds for annulment.

Orthodox reaction against these rabbis and their courts was furious, including mafia-like tactics: shunning, smear campaigns and physical violence. Among those condemning these courts was Chief Rabbi Sacks.

To grasp the significance, both of the Rackman and Morgenstern efforts and the opposition to them, it is important to understand who agunot are or can be and how agunot fare in rabbinic courts.

Agunot are women in any variant of Orthodoxy, anywhere in the world. They are also, at least potentially, women in any couple that uses the traditional marriage formula when the groom puts a ring on the bride’s finger (harei at mekudeshet li…).

But they can also be any woman in Israel, regardless of her religious orientation, because there is no civil marriage or divorce, only religious. All Jews seeking to divorce, from Orthodox to atheist, must do so in the courts of the State-authorized Chief Rabbinate, which are staffed by haredi rabbis, or in independently-operated haredi courts.

Abuse in the cases of agunot in rabbinic courts abounds. These courts often abet gett extortion, deeming it reasonable for women to pay huge sums for their freedom in money and property and in child custody and child support. They deem women who refuse such blackmail, rather than their husbands, the gett refusers.

Proceedings in such courts often go on for years, even decades, which itself functions to aid gett extortion, as women are worn down by the financial and emotional costs of the hearings and lose the possibility of having children in other relationships.

Such courts send women seeking divorce into mandatory “domestic peace” efforts. This includes women who are victims of spousal violence, physical and emotional, and whose children have been sexually abused by their fathers.

But, aside from the courts of Rabbis Rackman and Morgenstern, rabbinic courts don’t recognize abuse as grounds for divorce. They neither order the husband to give a gett (which he can still refuse to do) nor retroactively annul the marriage, which would free the women with no consequences for the status of children born in the marriage.

Rabbi Sacks did not participate in the mafia-like tactics many leveraged against this initiative to end Jewish marital captivity. But he also did not give an alternative way to solve the problem. If not by the expedients he rejected, then how? Marital captivity is, literally, a man-made problem. Consistent ethics requires ending it.

Since the demise of the Rackman and Morgenstern courts, the problem has continued, managed and perpetuated with such dangerous illusions as prenuptial agreements that leave the traditional means of enacting marriage, as well as its consequences, intact.

There are even more political dimensions to this problem.

Jewish marital captivity has been used, and is still being used, for political purposes in disputes between and within denominations, while leaving agunot trapped.

The dividing line between the emerging Conservative and Orthodox movements in the US in the early 20th century was drawn on the issue of freeing agunot. Various solutions were proposed, and eventually, enacted, by the then-new Conservative movement. These, the equally new Orthodox establishment rejected, even though they were proposed by eminent scholars using traditional p’sak, or halakhic rulings.

More recently, the issue has factored in power struggles between rabbis in Israel’s Chief Rabbinate system and Modern Orthodox competitors who seek to wrest control of the Chief Rabbinate from them.

Women are doubly objectified in these disputes. Deprived of control over their own marital freedom, they are used to advance other agendas, in the process of which their own is sidelined.

Jewish marital captivity will only end with determined actions to free agunot, and when Jews use alternative Jewish marriage rites, based on mutual and equal agreement and status.

It is long since time that women are included in Jewish humanism and ethics, which Rabbi Sacks championed so eloquently, and no longer treated as a separate case with its own rules.

Jonathan Sacks was a beloved leader. Yet his stance on marriage captivity belied his ethics