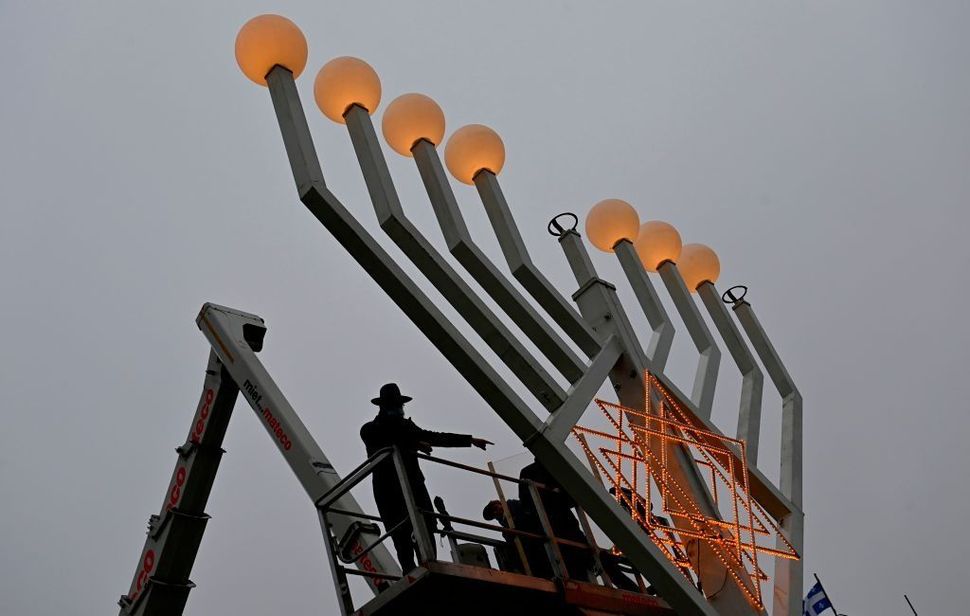 This year, we have to remember the original meaning of Hanukkah. What many of us associate with the holiday — a little bit of oil miraculously going a long way — seems profoundly underwhelming for a God who creates the world and redeems nations from slavery. Some will say it is precisely this fact, that the smallest kindness can be miraculous, which we must celebrate. In the grim winter of a pandemic, in a society divided and paralyzed, the smallest kindness is all we’ve got.

But Hanukkah always had greater ambitions. A group of zealous priests saw their society and its public institutions desecrated. They fought back and retook power. And, in so doing, they tried to reestablish sanctity.

We often forget that in the time of the ancient temple, the menorah stood in the innermost room. It was accessed by the priests alone. Every day a priest would come, clean out last night’s burn and relight the candles of this menorah, burning bright in a closed room. It was light for no one to see but light nonetheless.

There are a great many commentaries about the symbolism of this light, but a friend of mine suggested a different read that haunts me this holiday season. She was a member of the National Security Council in a previous administration.

I asked her what it felt like to watch the current administration neglect, mismanage, and dismantle the institutions of government. “We are waiting for our Maccabee moment,” she told me. “We are waiting for the chance to enter the State Department, Commerce, Agriculture, Homeland Security to clean up their corruption.” She went on, “It is long, boring work, but we have to restore integrity to our institutions.”

A temple is so much more poetic than an institution. Like all zombie nouns, the very word institution bores us to sleep, while a temple makes us wonder what was worshiped. The ancient Jewish temple, while a place of sanctity and poetry, was also an institution. It was a massive complex at the center of society that represented the Jewish people’s greatest moral aspirations. When it functioned well, it was a symbol of God’s abiding presence, of a moral order intact and vibrant. When it was desecrated, by the venal and the craven, it anguished onlookers unsure how to restore an order that once was.

For years I have prayed the words the prophets wrote in anguish about witnessing the temple desecrated, and tried, mostly in vain, to access their emotions. This year is different. The anguish is intuitive. We need lots and lots of Maccabees to reclaim our temples.

Maccabees always offered a subversive thrill to Jews accustomed to a powerless life on the margins. They were warriors who turned their passionate rage into violence to fight back the marauders. They made indignation real.

These are precisely the Maccabees we don’t need.

We need people to do what the high priest did with boring religiosity: clean out the crud, refill the menorah and get the candles burning again. Destruction is spectacular in its speed. Rebuilding, like all the jigsaw puzzles that took shape during lockdown, can be incrementally fascinating. Slow, focused Maccabees are what we need today.

As Jews looking to rededicate the public square, we cannot ignore the spoiling of our own community. So many of us followed the great error of evangelical christians and conflated the interests of religious Judaism with a certain political party. This happened mostly on the right, but enough in my own community of the left to know we are not immune to swapping out our liturgy for that of the hot political moment. We will need lots of Maccabees to rebuild the Jewish public spaces as well.

Fortunately, there is an innate momentum to this work. The rabbis of old captured the idea in the image of flames. Fire, unlike its opposite water, can give without being depleted. One candle at a time, mosif v’holech, as Hillel says, adding a bit as we go.