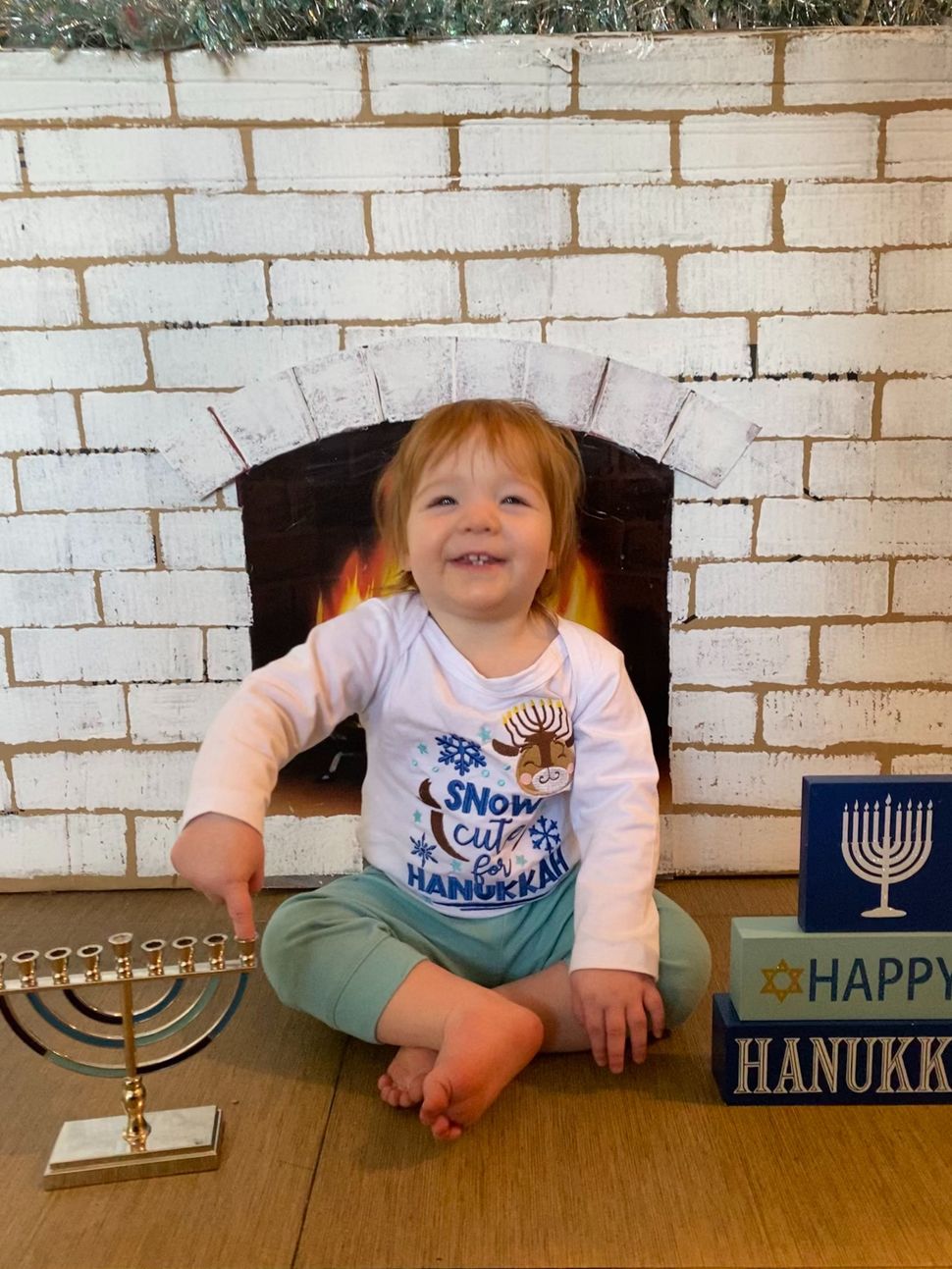 My husband and I celebrated our first Hanukkah together before we were formally Jewish. It was a month before our conversion classes at Anshe Emet Synagogue in Chicago had even begun, but I didn’t want to wait. We had just suffered our second consecutive pregnancy loss and I was desperate to be embraced by the warmth and light of the holiday season.

We didn’t own a single piece of Judaica, so we picked up a simple hanukkiah and candles from a local Target. We received a friendly smile from another couple as we hunted for the Hanukkah items in tandem, shuffling past copious boxes of Christmas paraphernalia before finding what we needed. We proudly took our new hanukkiah home and plopped it on the kitchen counter just in time for sundown on the first night of the holiday. Squinting self-consciously at a transliteration of the Hanukkah blessings that we had downloaded from Chabad.org, my husband and I prayed and lit the candles, hoping they would light the way into the uncertain year ahead.

Despite its proximity to Christmas, Hanukkah is not the highlight of the Jewish calendar. It’s not even a particularly religious holiday; it celebrates a historical event, not a biblical one. But since it was the first Jewish holiday that we ever celebrated, it serves as an anniversary of sorts. A commemoration not just of the rededication of the Temple of Jerusalem, but the rededication of our lives to the Jewish people.

Hanukkah feels like the bridge between our lives before and after — before and after Judaism, between the heartbreak of pregnancy loss and the eventual arrival of our daughter, between life as newlyweds and life as a Jewish family unit.

Last year, we should have celebrated Hanukkah for the first time as members of the Jewish community, but instead we were celebrating a different kind of miracle. Our daughter Ora Leah arrived a mere three weeks before the festival of lights, and she was keeping us on our toes with her demanding day-and-night feeding schedule. We were so tired and preoccupied with our new arrival that we only managed to light candles twice. My husband found time to make latkes from scratch while the baby took an unusually long nap — another Hanukkah miracle — but the holiday was not entirely what I had planned for our first Hanukkah as Jews.

And then there was 2020. Difficult, disappointing, deadly 2020. When I dressed my daughter up as a tiny pineapple for Purim in March, I couldn’t have anticipated that it would be our last typical holiday celebration of the year. In order to keep our communities safe, we transitioned to Passover seders hosted on Zoom and Shabbat services live-streamed over Facebook. We dressed up for the High Holidays but had nowhere to go. We built shelters for Sukkot but did not invite friends over to eat in them.

When it was time to celebrate Hanukkah once more, I wasn’t quite sure how to make it feel special. It’s difficult to find comfort in family holiday traditions when your families aren’t Jewish. In order to extract meaning from holidays as converts, we rely on celebrating them with our Jewish community. This year, our community was trapped on the other side of a screen.

We entered the holiday season feeling worn down from months of quarantine with an infant and longing for the sense of connection one feels at shul on a Saturday morning or while outside shivering at a public menorah lighting. Disappointed as I was about how the year had panned out, I never considered scrapping our festivities. This fall has been a dark one in America. We need all the light that we can get.

I decided that just because we’re lighting candles alone at home doesn’t mean that we have to feel alone. I poured myself into making Hanukkah memorable, even if we weren’t going to leave the house.

Even though I’m told it’s a goyish thing to do, I bought my daughter eight modest Hanukkah gifts and wrapped them in blue and silver paper. We donated to Chicago Public Schools Children First Fund in order to provide holiday meals and toys to families impacted by COVID-19. We signed up to send gifts through U.S.P.S Operation Santa despite the fact that Santa no longer makes appearances in our home. I ordered latkes and sufganiyot from Galit Chicago, partially to support the struggling restaurant industry but mostly because the last thing my family needed at the end of this awful year was to eat my cooking. We made time to send out holiday cards and reconnected by phone with friends and family—our former rabbi, my law school roommate, a niece home from college for the holidays. We roped our non-Jewish families into our celebrations via Facetime and let them ooh and aah over my daughter’s little gifts. My mother-in-law even made latkes for herself from 400 miles away.

And of course, at night, we lit our candles. We gathered our small family around the hanukkiah and thanked Hashem for health. We watched our daughter devour her first latke, chubby fingers shining with oil. We prayed for everyone impacted by coronavirus and asked ourselves what else we could do to be someone else’s light in the darkness of this year. We lit our candles and remembered why we became Jewish.

In fact, Jewish history emphasizes that the year you get is rarely the year that you had planned. Here we are anyway, with our candles burning brightly in the darkness and our healthy baby girl babbling along with our prayers. Our Hanukkah was different than anticipated, but it was perfect.

Shannon Gonyou is a practicing lawyer, Jewish convert, and a member at Beth Ahm Synagogue in West Bloomfield, MI.