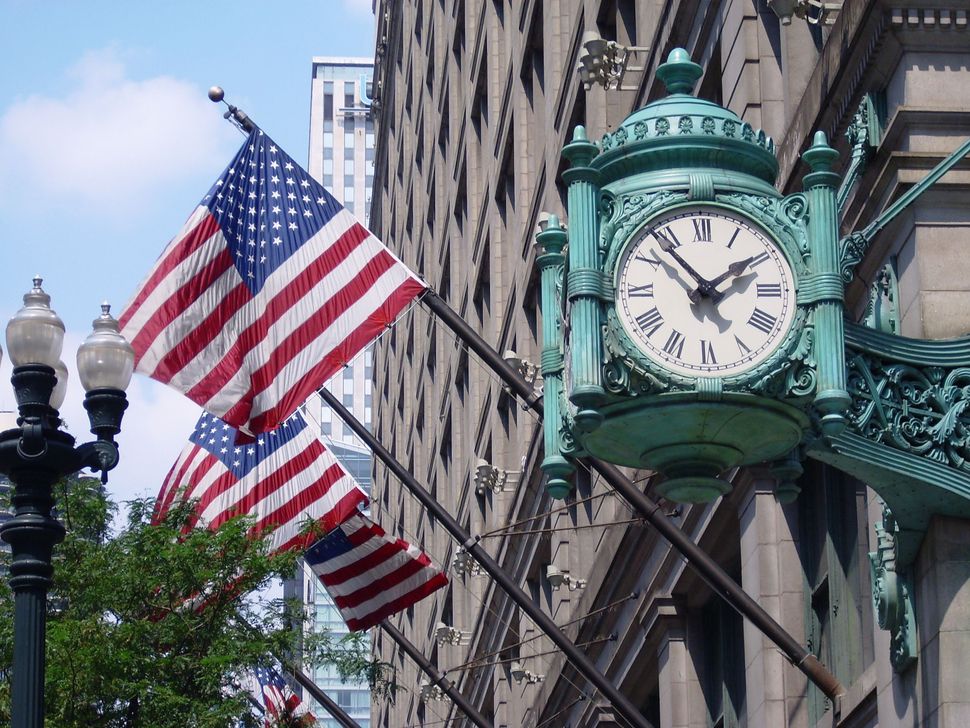 Every Dec. 31, when the hype of New Year’s sequins and resolutions threaten overload, I escape. I become five again and recall my family’s first celebration in America.

Rosh Hashanah, the Jewish New Year, is a pensive time; a moment to search deeds and cleanse oneself of the year’s wrongdoing and wrong-thinking. America’s party hats and countdowns to midnight were as alien to my parents as self-flagellation. But as new arrivals they wanted to be American.

So when their friends, the Tschewicks, mentioned New Year’s Eve, my parents listened. After all, the Tschewick family had arrived in the U.S. a year before us.

“All Chicago goes downtown to State and Madison,” Mr. Tschewick explained. Midnight was spent under the Marshall Field & Co. clock with thousands of strangers. Eager to be real Americans, my parents agreed; my siblings and I embraced our initiation into Americana.

On Dec. 31, 1952, we rode the subway to meet the Tschewicks under the clock. Despite the masses converging on that intersection, we found them. The streets teemed with families bundled against the bitter cold, women in glitzy dresses, high heels and flimsy wraps and packs of American teens. But it was the sailors in their pea coats, bell bottoms, and rakish caps atop crew cuts that got me. These boy-men radiated exuberance and I adored every single one as I clung feverishly to my parents’ hands.

Our first priority was the lavish department store windows. Windows dazzled with old fashioned tableaux. Tinseled evergreens, blazing fire places, cheerful parent mannequins attired in period clothing and wide-eyed, rosy-cheeked kids amid mounds of presents. A frosty window scene revealed a sleigh drawn by a herd of reindeer, suspended high in an azure sky. What a world! Our first floor north-side of Chicago apartment had no such magical visitations.

After much freezing and window gazing the adults decreed it was time to warm up. The luminous Walgreens’ drugstore beckoned us into its wonderland of trinkets, tempting aromas, and a miraculous waterfall of moving stairs. Never had I seen such a contraption before and my tentative steps onto the escalator set my heart racing. Could I be sucked into the metal teeth? Would my perennially untied shoelaces imprison me? And how could one return from stairs that only moved down?

The daunting voyage proved worthwhile. We descended into a shimmering stainless steel and pastel-hued formica futurama: Walgreens’ basement cafeteria. My eyes devoured rows of exotica, creamy potato puffs adrift in brown sauce, brobdingnagian black and white cookies, rainbow-cubed gelatin and layer cakes. Tugging desperately at my mother’s arm, I begged and cajoled for one of these visions. Instead, I was led wordlessly toward the drinks. I chose a carton of chocolate milk and a straw that bent adorably in the middle.

As we settled ourselves into adjacent booths my mother glanced around. Then she reached into her omnipresent red-leather shopping bag and retrieved a giant bakery pound cake. Our celebration was to continue, after all! Using her wooden-handled kitchen knife, my mother cut us each an enormous slice of pound cake.

Within minutes we children inhaled our milk and cake and set out to investigate this playground. We explored bathrooms, hid in stalls, perched atop toilets, pondered the mystery of urinals.

Gradually we found our way back to the staircase rapids, and the counterpart escalator that returned upstairs. Gingerly, we rode to the first floor. Then we rode down again. My fear of untimely consumption by yawning metal teeth disappeared.

Somehow, our yelps went unheard by our parents as they chatted in their corner booth. But the store clerks noticed. First, the lights began flashing, adding a surreal aura to our chase, which only increased our zeal. We slid down banisters, played tag up and down staircase. We trailed toilet paper from the bathroom stalls, the streamers taking flight behind us, tangling in our shoes, the stair treads, and low hanging signs and fixtures. The joy of our American New Year!

Suddenly, the lights ceased flashing and the escalators halted. A voice announced that Walgreens would close in five minutes.

As our parents drew near, we five kids huddled together fearfully. But the adults seemed oblivious, unaware that we had brought the great store to its knees.

All innocence, I clutched my mother’s hand as our little group climbed the now-still metal stairs to the first floor. Not until we were out in the cold air did I relax and deflate.

Downtown Chicago was still thick with revelers, but our adventure had exhausted us. We made our way to the subway, the adults flush with companionship and coffee, the children tempered by fear and over-excitement. On the train, despite the stuffiness and screeching rails, I collapsed and dreamt of escalator adventures and narrow escapes.

In the decades since, I’ve spent all sorts of New Years’ Eves in celebration, in denial, at home, on the road and at work. Yet, I always hold dear that night of Walgreens, family and friends, my mother’s pound cake, and my first escalator in America.

Sara Nuss-Galles was born in Kyrgyzstan to Jewish Polish refugees who fled the Nazis. Her work has appeared in The New York Times, The Los Angeles Times, Lilith, Kveller, and numerous magazines and anthologies. She was a guest columnist on Public Radio’s Marketplace and lives with her husband in Southern California, a long way from Kyrgyzstan.