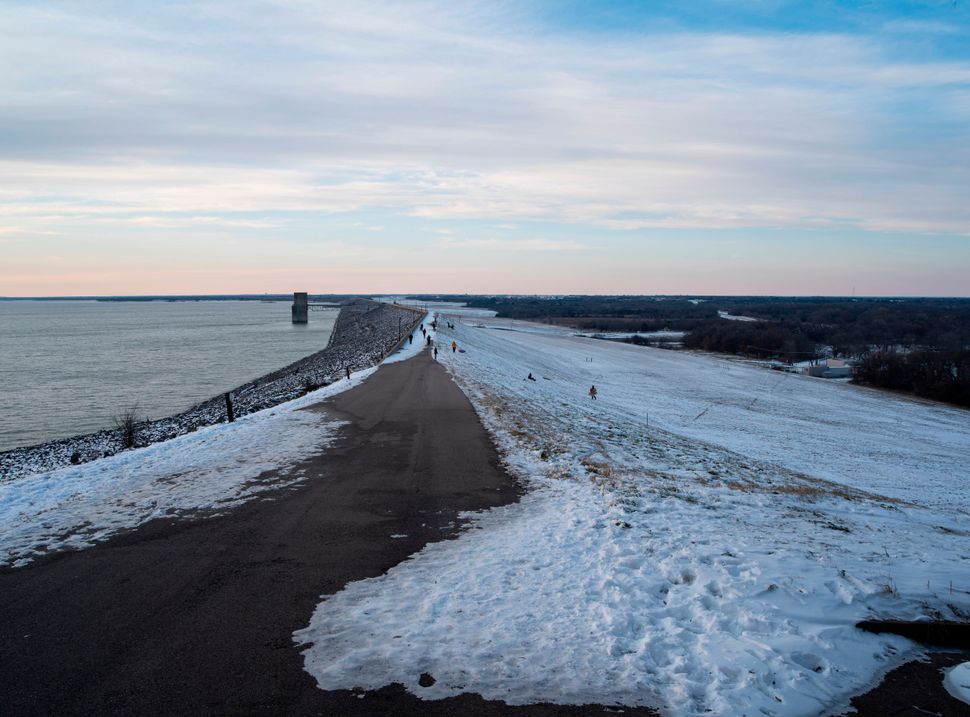 I’m a cantor, and I lead a small congregation in Arlington, Texas; I’m also a hospice chaplain. So given my credentials, I’m supposed to be good in crisis situations.

But I have to be completely honest: I was completely unprepared for the devastating winter storm that hit us last week.

Who could ever have imagined that Texas could dip into the single digits and lose all power for days? We have no working flashlights. We have no backup chargers. No stockpiled jugs of water. Like I said — completely unprepared.

When we woke up that first morning, it was 3 degrees, but my husband Richard and I were hopeful that we’d have our electricity back any minute. No such luck. We started adding extra layers around lunchtime. At four we decided to run out to our cars to warm up a bit and charge our phones. We texted family to let them know that we hadn’t turned into human popsicles yet.

Around 6 we knew that it would be dark soon, and realized that having no flashlights was about to become a big problem. Inspired by all the “Little House on the Prairie” books I read in my childhood, I decided that if Laura Ingalls Wilder and her family could live in a log cabin with nothing but a fireplace to keep them warm, I could certainly make do in a two-bedroom apartment with running water (at least so far).

I found candles and plenty of matches, courtesy of my mother-in-law, who brought a stockpile of old matchbooks with her when she moved to Ft. Worth a year ago. We ate cold vegetarian stew under the glow of four tall tapered candles. As complete darkness set in, there was nothing else to do but hunker down under four layers of blankets and try to sleep.

The apartment was pitch black and I didn’t want to leave candles burning unattended, but I also didn’t want to break an ankle trying to find my way to the bathroom, and that flashlight on my phone was living on borrowed time.

And then I had a revelation, almost as if I were receiving a message from above. I did have access to lights — the lights we have used for hundreds of years to keep the memories of our deceased loved ones alive. And even though they were not meant for practical purposes, I felt that for the sake of pikuach nefesh — the practice by which we can violate rituals if doing so will help to save or at least protect our lives — an exception could be made.

So using my mother-in-law’s matches, I lit yahrzeit candles. I placed them around the apartment, knowing that they would burn safely and last for an entire day, after which I hoped that we would finally have our power back.

The next day, the cold was just as bad. I retreated to my fortress of coats and blankets, and I prayed.

Now, being a cantor, prayer is supposed to be my specialty, but I have to admit that it has never come naturally to me. I rely on my trusty siddur for help, but I was too cold to get out of bed and search for it. I decided to wing it. And so I prayed for help, but mostly I expressed my gratitude.

Because this whole nightmare made me once again realize how grateful I was for what I did have: shelter, food, water and someone to hold in the cold darkness; our children, who texted us at all hours of the day and night to make sure we were ok; and friends who offered us a place to stay in their heat-filled homes.

Our power and heat were finally restored the next day. We had been without it for a total of 30 hours. But by the time we were back on the grid, we’d lost access to water. Pipes and water lines were broken all throughout Texas, so once again, we waited for resolution. We were running a bit low on previously-boiled water to use for drinking, and we had about half of a bathtub still filled. As we prepared to welcome the Sabbath we hoped that we would be able to take a shower before the night was out. No such luck.

But hey, I’m clergy, and it’s my job to instill hope and be positive. BC — before COVID — the storm and its devastating effects might have really thrown me. But after a year of a deadly pandemic, a near government takeover, devastating wildfires, horrible tornadoes and a recent earthquake, a cold snap paralyzing the state of Texas, complete with major flooding and a lack of working water pipes, almost seemed par for the course.

As Shabbat came to an end, it began to thaw out. We ventured outside to take our first walk in a week. And after six rather challenging days without water, we finally were able to turn on the tap. I literally rejoiced as I washed dishes and laundry. We were lucky, and survived relatively unscathed. So many people suffered so much worse. Many are still waiting for their water to be turned back on. I really have nothing to kvetch about.

Still, I’ve decided to keep my bathtub filled for the next few days, just to be on the safe side. Flashlights are on their way, I’m beginning to relax a bit in the hope that this nightmare is behind us.

But I will take lessons from it. Most of all, I’ll never forget how those yahrzeit candles gave me a sense of real comfort, and relief — a tiny bit of light in an extremely cold, dark moment. I guess I was more prepared than I thought.

Sheri Allen is a cantor based in Arlington, Texas.