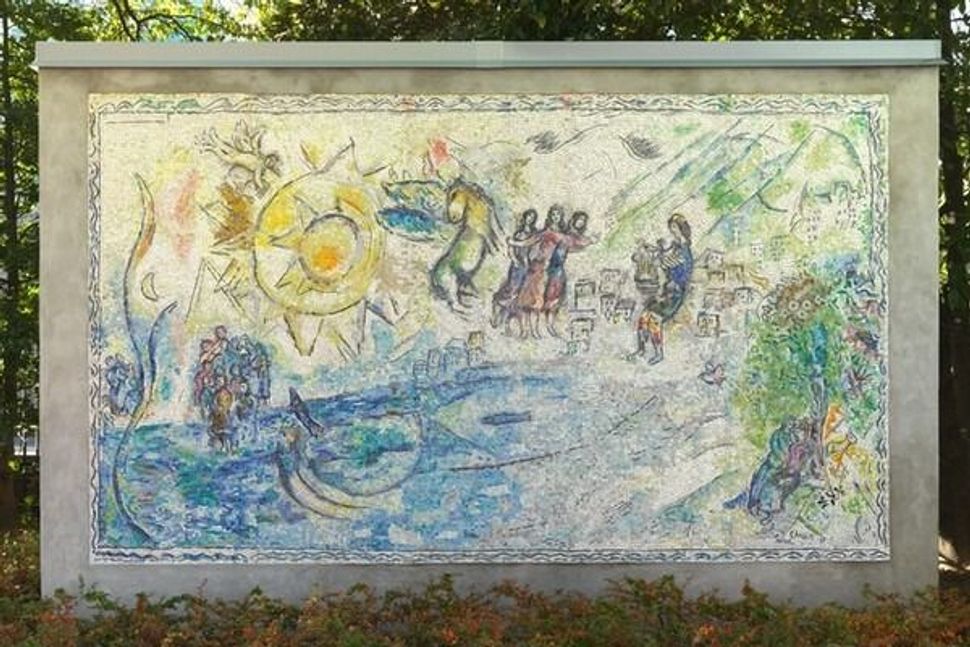 In the sculpture garden of the National Gallery of Art, Marc Chagall’s “Orphée” depicts a group of people about to cross a sea. According to the museum, the image is a reference not only to the “general immigration of Europeans to America, but also to [Chagall’s] own experience” – the Jewish artist fled the USSR, escaped the Nazis in France, and ultimately found lasting refuge in New York.

Though missing from the museum’s account, the group in front of a pyramid also evokes the exodus of the Israelites from Egypt. Chagall is not alone in comparing America to the biblical story. Throughout U.S. history, Americans, from Pilgrims to civil rights activists, have been inspired by the tale, which Jews gather every Passover to recount and relive.

Beginning Saturday, Passover comes at a contentious time in the meaning of American history, as the legacy of the Founding Fathers, slavery, statues, free markets, and even our children’s books are in question. But it is also an opportune time — for a lesson in e pluribus unum, we may look to the Jewish holiday.

On Passover, families from Tehran to Tel Aviv, hold Seders (literally: “order” in Hebrew), to celebrate the children of Israel becoming the people Israel when God delivers them from slavery. Though the Haggadah provides a blueprint for the night, the text is also an invitation for an interactive conversation exploring our collective past and future.

The Haggadah instructs each person to experience the Seder “as if he left Egypt.” Because not only did God redeem our ancestors, we are to understand that God redeemed all future generations, as well.

To that end, we eat bitter herbs to taste the bitterness of slavery and recline to assemble like free men. While singing the song “Dayenu,” Persian Jews whack one another with scallions to simulate slave drivers in Egypt. Iraqi Jews carry bags and walking sticks as Israelites leaving Egypt for Israel.

Moral education through narrative is central to Passover. The People of the Book are born from and maintained through their story, one that has inspired Jews and non-Jews alike.

Former President Reagan also understood the significance of national stories. In his 1989 farewell address, he warned Americans of “an eradication of the American memory that could result, ultimately, in an erosion of the American spirit.” As an antidote, he prescribed a ritual similar to a Seder, encouraging parents to sit down at the seat of “all great change in America,” the dinner table, and teach their children “what America is and what she represents.”

Indeed, never have I felt more grateful to be American than upon encountering what could have been my proverbial Egypt. When I was 19, I first met my cousins, who lived profoundly restricted lives under Iran’s theocratic dictatorship, particularly as Jewish women. I was struck by the opportunities and liberties America afforded me, and realized it was only an accident of history that separated us. (My mother fled the Islamic revolution on her own at 18.)

I’ve found that often immigrants, with the taste of a metaphorical Egypt still on their tongues—having more recent brushes with tyranny and repression under socialist systems—have a visceral appreciation for America’s experiment in self-government. To them, freedom tastes all the more sweet.

As Jews we are commanded to understand the Exodus story as our own, and as a nation of immigrants, we are well-served to remember where we came from not for the sake of division, but to bring us together in gratitude and shared experience. Americans, though we don’t share a common ancestry, are similarly bound by dedication to the principle “that all men are created equal.” Abraham Lincoln called this principle the “electric cord … that links the hearts of patriotic and liberty-loving men together” as if they “were blood of the blood and flesh of the flesh of the men who wrote that Declaration.”

Exodus is not the only story which still inspires. Immigrants continue to flock to America in pursuit of the American dream. Our narrative is also the source of our greatest strength, especially in an era of great power competition in which the United States, China, and Russia vie for global influence. China may try to sell its story as an example of an economically successful alternative to American liberal democracy, but many citizens in authoritarian Russia and China would rather live in America. And starting at the dinner table, we must not let our children forget.

Eliora Katz is a former Egypt Country Director in the Office of the Undersecretary of Defense for Policy. She can be reached at eliorakatz@gmail.com.