My parents escaped the pogroms in the Ukraine. Here’s why I returned. 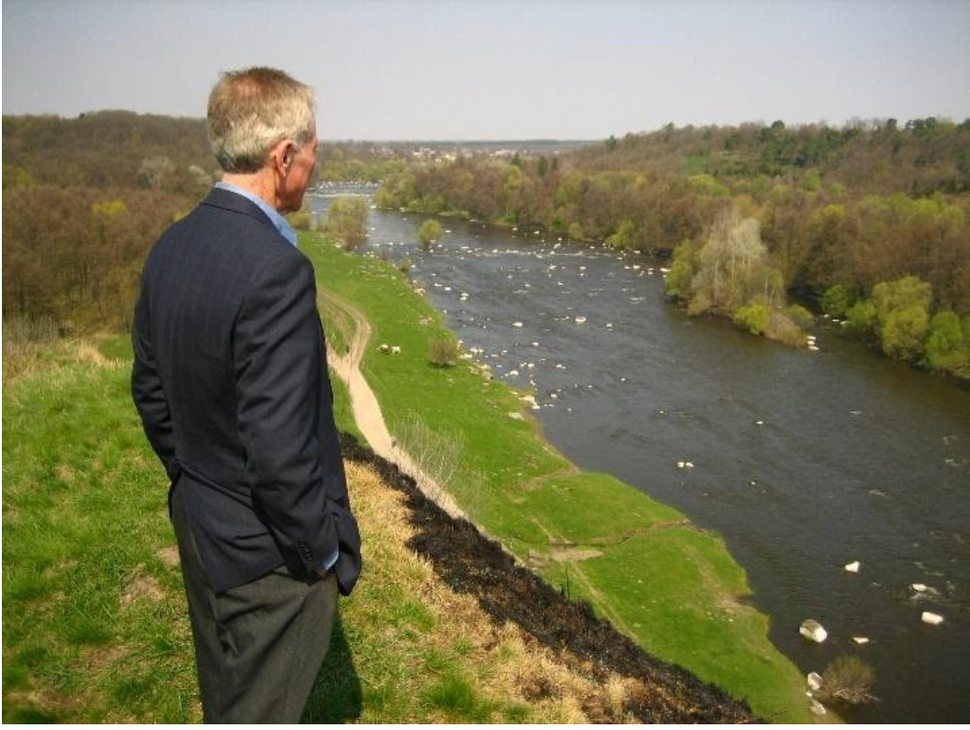 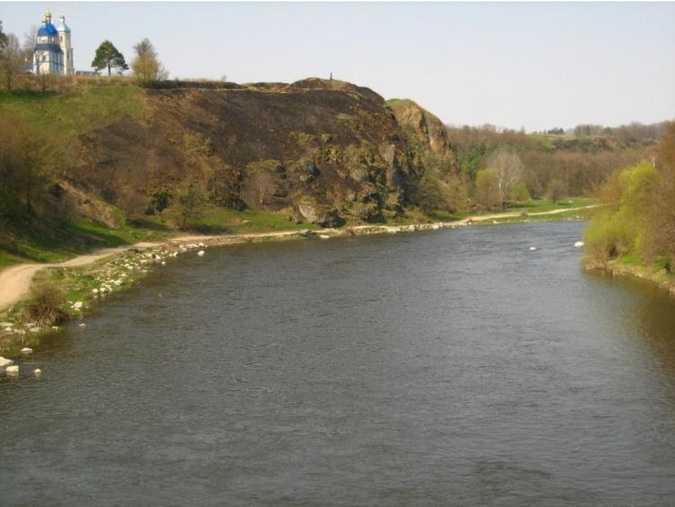 The bedtime stories my father told me in our cramped apartment in the gritty Bensonhurst section of Brooklyn sketched a magical, mythical place.

The Snyderman family house, just outside of Pechera in southern Ukraine, was a simple one, with goats often grazing on its grass roof. My father’s descriptions of the snow glistening in the air and the frosty breath of the horse were as vivid to me as Tolstoy’s descriptions of sleigh rides in “War and Peace.”

As I was growing up, I never imagined that I would become chancellor for Health Affairs at Duke University and spend my days on its magnificent Gothic campus, a far cry from Bensonhurst. Little did I know how the childhood stories of Pechera would profoundly affect my life — and drive me to visit there to find the answers to all my childhood questions.

Throughout my adult life, I believed Pechera couldn’t be found. Then, in 2003, I located a detailed map of Ukraine, and in tracing the course of the Bug River, I found the three towns of Spicov, Tulchin and Nemirov surrounding Pechera, just as my father had described. I had to go.

In 2006, my wife and I, along with several colleagues from Kiev who served as guides, took the train to Vinnitsa where we would meet others and drive to Pechera.

My father’s stories about Pechera and his descriptions of the Bug came with an important graphic. One night he took the cardboard from a laundered shirt and roughly drew the village. Here, he said, was the town, here the large Russian Orthodox church, the duke’s estate, the Jewish cemetery high up on the ridge, and of course, the wide, meandering river below. There were many stories of cold winter days with my father riding on horseback or in wagons over muddy roads or in sleds over snow through the woods with Pechera perched high above the bank of the beautiful Bug River.

As we drove to Pechera, my excitement grew as did the momentous feeling of the importance of the voyage.

My heart was racing as we walked to a bridge — below was the Bug! Looking to the far side of the river, I could see a high bank and above it, a Russian Orthodox church with its bright blue domes and stark white wooden walls. Beside that stood the small town of Pechera on a cliff above the river. 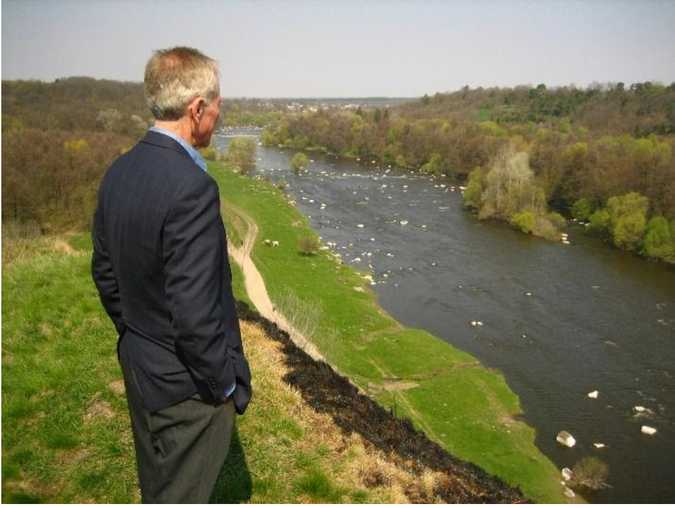 My father told me stories about the violence toward Jews that often occurred after Easter Mass when the local peasants were incited by stories of the Jews’ “killing Christ” or using the blood of Christians to make matzah for Passover. The worst terrors were a consequence of pogroms that swept Ukraine in 1918-1921 when bands of Cossacks rode through towns robbing, raping, and killing Jews.

He described the chaos following World War I and the Bolshevik Revolution, with at least three armies sweeping through the region. My father said that families hid in the Jewish cemetery among the rows of tombstones to escape Cossacks on horseback. He told one story many times about when he was a teenager and running through a wheat field, chased by a band of Cossacks firing at him from horseback.

When finally caught, he was forced to stand between Cossacks on horseback, one on each side, as they beat him about the face with their batons, the blows landing no matter how he turned. Then they turned him over for induction into General Petlura’s army.

We got back in the car and headed toward Pechera. Old, simple wooden homes, perhaps a dozen, boarded up and mostly vacant, stood in a row. Wooden utility poles holding two wires ran down the street and distributed two connecting wires to each house. An outdoor well for water could be seen halfway down the street and numerous roosters crowed loudly in a fenced yard. Occasionally, a passerby would look at us furtively, making no eye contact. (147) 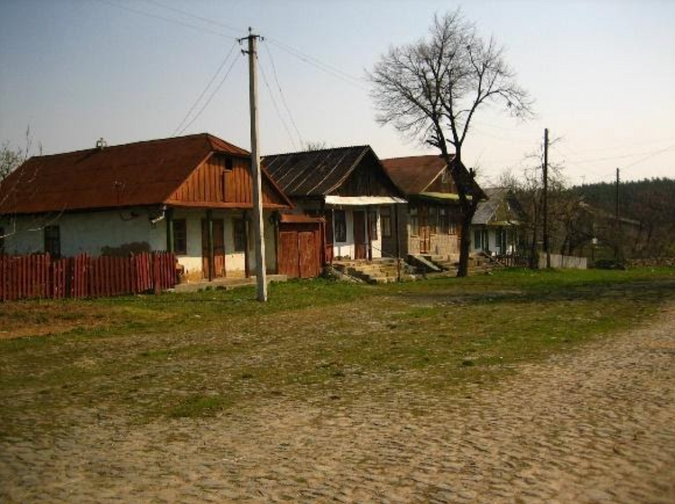 But I was actually in Pechera! Perhaps one of the houses had been occupied by the Candeubs, my mother’s family? Indeed, one in particular looked very much like a house in one of my father’s drawings. This could be where the family lived and where my grandfather, Itzac Candeub, taught the Talmud to poor Jewish students for nothing more than bits of food.

My mother talked little of her life before America, but I recall her great pain the few times she spoke about the panic and fear she and her family felt while running to hide among the tombstones in the old Jewish cemetery as the pogrom raged. She witnessed Cossacks killing her father in front of their home, and seeing her father’s body being eaten by dogs. She never got over the betrayal by her gentile friends who evidently guided the Cossacks to the Jewish ghetto and remained there while her father was killed.

Likely, Itzac — a father, an educator, the grandfather I never met — was murdered in front of one of these very houses. The Jewish cemetery was atop the hill. The only way to get there was to scale the hill. Soon, my wife Renee and I were on our hands and knees climbing, grasping the unforgiving hillside trying to get higher and higher. Stopping was not an option. I needed to get to the cemetery where my family hid among the tombstones.

Amid my struggle, clinging to this steep hill, I realized — this is what my mother was trying to tell me!_ No men on horseback could possibly get to the Jewish cemetery, because the hill was too steep, too gravelly, and there was no other way up. My mother, her sisters, the Jews of Pechera scrambled up this treacherous terrain._ I was in the very place where my family ran for their lives during pogroms. I knew this would be the closest I could join emotionally to my mother, Aunt Paula, Aunt Dina, and Buba Laika.

The cemetery was guarded by an old iron gate leading to a large memorial, perhaps marking its closing after years of service. Renee and I walked among four rows of old headstones carved in Hebrew, each row being about 100 feet long with many tombstones thickly covered by vines. I looked for Schneiderman and Kandubs among the names, but found none. 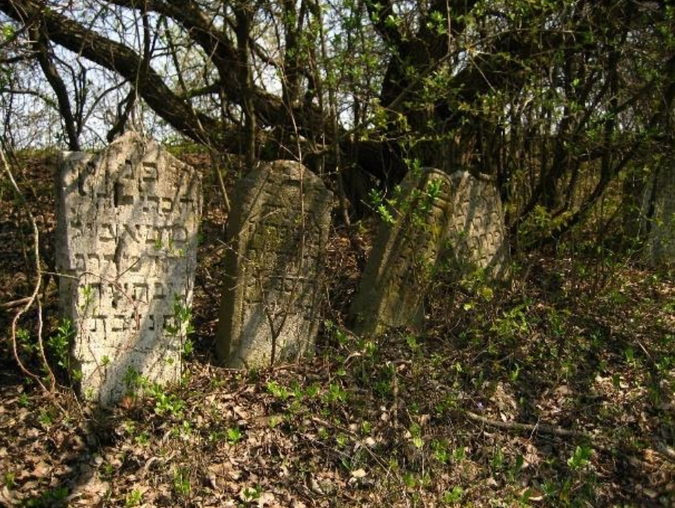 In Pechera, I was overcome by a similar feeling of being “other,” not belonging and unwelcome. There are now no Jews at all in Pechera or throughout the surrounding area, whereas before the pogroms and the Holocaust, Jews made up about a third of the population.

I finally understood the importance of hiding amongst the tombstones.

Being there, I was struck by the profound lifelong influence Pechera had on my parents and their entire family, as bittersweet as that influence was. I believe that the dogged determination and persistence it took to allow me to leave Brooklyn, overcome Jewish quotas then in place for medical training, and achieve a privileged life in medicine, was passed on to me by learning what my parents overcame.

But though much was imparted to me, most of the stark reality could never have been fully communicated, as I now knew while standing at the cemetery overlooking the town. So much less of my parents’ stories have been transmitted to my children and virtually none to my grandchildren. As a stood there, I felt a far greater understanding of the importance of more deeply knowing one’s history and passing it on to the next generation.

I gazed a while farther from the graveyard across the deep ravine to the hill of the town on which sits the Jewish section. I imagined children, in terror, running down the dirt road from the town scampering across the small stream and scrambling up the hill to the cemetery. My family, fearing for their lives, never to be the same. Neither would their children, even in America. Yet, while so much of who I am and where I came from is in the past, Pechera is now peaceful and quiet…except for the roosters.

Dr. Ralph Snyderman is chancellor emeritus of Duke University in Durham, N.C., and executive director of the Center for Personalized Health Care at the university. He previously served as chancellor for health affairs at Duke and was the founding president and CEO of the Duke University Health System.

My parents escaped the pogroms in the Ukraine. Here’s why I returned.