The day my son’s ashes arrived in the mail The ashes came to my home in Maryland from Southern California, shipped via special delivery by the aptly named funeral home Ashes to Ashes. They arrived encased in a rectangular, polished, dark wood box about the size of a loaf of artisan bread. I immediately opened it to make sure it was not empty. It was not.

The child I loved, worried about and cried over for more than 54 years was physically reduced to a powdery dark gray substance. I was reminded of a fine black sand beach.

How could this be my Brady? But it was.

Brady had died three weeks earlier. Cancer killed him following a three-year struggle. In accordance with his request, he was cremated rather than buried, the customary bodily disposal route for Jews, even secular ones. 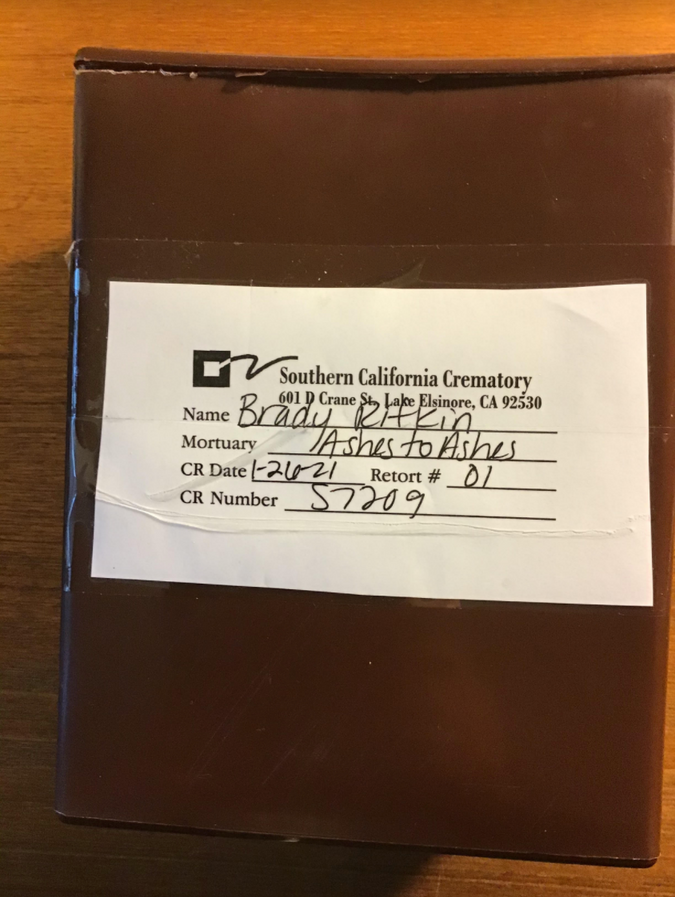 Inside the box, in a protective plastic bag, was a portion of Brady’s ashes (the rest went to his widow and a brother), looking as if they’d been finely crushed and strained to separate out any indelicate bone fragments, or whatever else might survive the fire and remind me that this was once a human being, and my son.

Handling your child’s ashes stirs the ultimate parental pain. For me it also triggered an exploration of my feelings about death and cremation. In short, it stirred a clash between my Jewish DNA and the non-traditional Jewish views to which I’m now drawn.

Jews such as myself are not used to the aftermath of cremation. I’d only seen body ashes once before, decades earlier. That experience elicited none of the emotion I felt upon receiving Brady’s ashes. Perhaps because that first time it was the ashes of someone I no longer loved and who once hurt me deeply, Brady’s mother.

Jews have always been the burying kind, stretching back, we’re taught, to Abraham and his purchase of the Cave of the Patriarchs burial ground in modern-day Hebron. Burial is ingrained in our cultural make up. I still plan on ending up in a hole in the ground next to my wife, because that’s what I’ve been bred to expect and revere.

Cemeteries exude a spiritual quality for me. I sense a heightened energy when visiting one, a transpersonal connection to life’s continuum. The cemetery need not be a Jewish one for me to feel this way. A large military cemetery will do.

However the energy in a Jewish cemetery, particularly a historic one, connects me to my history, my family, my people, the very core of my being. I luxuriate in this feeling of awe. 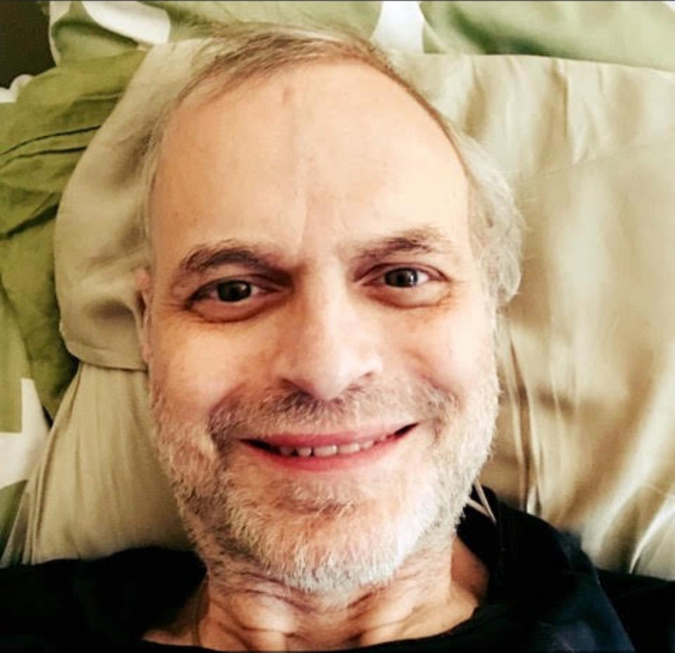 I vividly recall experiencing this when visiting a four-century-old, poorly maintained Jewish cemetery in the small Ukrainian town of Chechelnik during the Soviet Union’s waning days. On the warm summer day I visited, the waist-high grasses and wildflowers reflected the late-afternoon sun. Swarms of dainty white butterflies fluttered about. It was magical.

I also feel it deeply whenever I visit my parents’ graves in Long Island’s century-old Beth David Cemetery. Buried in some of the quarter-million graves there are all four of my grandparents, several aunts and uncles, distant cousins, and, away’s off, one holding the remains of the brilliant comedic actor Andy Kaufman.

So I’m predisposed toward the in-ground disposal of human remains. But as I said, my adult son opted for cremation and I did not question his decision, not that doing so would have made a difference.

His decision mirrored an end-of-life choice that increasing numbers of Jews are making, and which much of the non-Orthodox American Jewish religious hierarchy has come to accept, however reluctantly. Now it’s my turn.

Orthodox Jews, of course, remain strict about burial. Reenforcing this position is the traumatizing memory of the Nazi crematoriums, making cremation by choice so much more distasteful to many.

But I’m not Orthodox, and my son grew into adulthood with a cultural but not a religious connection to his Jewishness. Knowing him as I did, I’m sure cremation’s cheaper cost and its absence of long-term maintenance needs helped sway his decision.

I’m sure he also thought that cremation was the more environmentally sound way to go, though that’s not necessarily true. In January, California officials temporarily suspended air pollution rules governing the allowable number of monthly cremations because of the backlog of bodies caused by the state’s COVID-19 deaths.

Imagine that. Cremation contributes to diminished air quality. Our bodies are just another carbon-based pollutant.

Brady was one of those who benefited from the rule suspension. Until that happened, his body had been in cold storage for weeks waiting its turn for incineration. My mental image of him in some chilled container was nearly as upsetting as receiving his ashes.

Conservative Judaism — to which I’m nominally attached via the dues I pay to the synagogue that I no longer attend with any regularity — now makes allowances for cremation. So do Judaism’s other theologically liberal movements. A Conservative rabbi friend told me the movement chose to do so “because we needed to accommodate the growing number of congregants doing this.”

The first such Conservative accommodation I’m aware of dates to 1986. It came in the form of a Responsa published by the movement’s Rabbinical Assembly, titled “Cremation in the Jewish Tradition.” Clearly, the issue’s been stirring the community for some time.

There are no reliable figures on the numbers of American Jews currently choosing cremation over burial. Overall, though, just under 50% of all Americans chose to be cremated rather than buried in 2019, according to the Cremation Association of North America.

Nor, it seems, are there explicit Hebrew Bible prohibitions against cremation. Respect for the bodies of the dead, is, of course engrained in the tradition. I learned this through my participation in a synagogue chevra kadisha ritually preparing male bodies for burial.

But a clear prohibition is missing. Apparently burial is more a strongly recommended minhag, or custom, than a firm biblical commandment. Some historians say the custom likely stem’s from our tribe’s ancient desire to preserve our ways by distancing ourselves from non-Jewish practices, cremation being one of them.

I don’t believe in any form of bodily resurrection, so in this regard cremation is not an issue for me. Still, as I’ve said, my cultural Jewish bonds remain strong; I won’t eat pork or shellfish, for example.

And I’m a pushover for ritual. Religious bells and whistles move me, regardless of the faith involved. A Jewish funeral can be high ritual. Commercial cremation from which all mourners are excluded is decidedly not.

But here’s what enabled me to embrace Brady’s decision.

I’m philosophically drawn these days to what might be called secularized Buddhist thought. This means being drawn to the religion’s psychological tactics for skillfully dealing with the circumstances and emotions that keep us ensnared in mental confusion and pain. It also means jettisoning virtually all of Buddhism’s deep theology as culturally irrelevant to someone such as myself.

Key here are the teachings of non-attachment and impermanence.

In simple language, impermanence means that everything — the tangible and intangible, the animate and inanimate — is in constant flux. Nothing stays the same, including us, no matter how glacial the pace of change.

We are born, we age, we die. Our bodies change as we move from infancy to old age. We begin as a zygote and end as decomposing sacks of putrid fluids, gases and bacterium. The script never varies. It won’t for you, it won’t for me, and it didn’t for Brady.

So what is left other than a mental construct of the son I’ve lost?

I have no need to square any of this with traditional Jewish thought. Nonetheless, it’s worth mentioning a neo-Hasidic interpretation I heard in a recent Zoom class taught by Rabbi David Ingber, who leads New York’s post-denominational Romemu synagogue community.

“At first glance,” said Ingber, “there is a conflict from what the Buddha is saying about impermanence, and what Jewish theology affirms to be the basic structure of Torah, God, and thus reality. And yet, change as a return to timeless impermanence, or ayin — ‘nothingness’ becomes a part of the way the mystics in our tradition think about reality. The Baal Shem Tov, founder of the mystical revivalist movement known as Hasidism, noted in Noach 12:1, that, ‘the rising/falling and all impermanence is at the core of serving God.’

“In the Jewish [rendering] of impermanence, everything returns to God, and from thence is born. God is the only eternal, and the place from which we, and all of life, is birthed anew. We use these teachings to learn to come to terms with what falls away, because when it comes back, it’s also different.”

Yes, my box of ashes is my son. Only his bodily form has changed, as all things inevitably do. Moreover, he does not smell as he now would were he buried. This allows the box with Brady’s ashes to rest on a bookshelf an arm’s length from where I sit writing this essay.

That’s no small thing. He is physically with me.

Whether or not his soul, his essence, his neshama — whatever you imagine it to be — is also near me is another issue I choose to leave for another time. For now, let’s just say my beliefs trend toward the agnostic.

Still, when I’m able to again visit Beth David cemetery, I have a plan. Between my parents’ adjoining graves I will dig a small hole, and bury Brady’s ashes there, in the ground, where they belong.

Ira Rifkin is a journalist and the author of ‘Spiritual Perspectives on Globalization: Making Sense of Economic and Cultural Upheaval.” He lives in Annapolis, Maryland.

The day my son’s ashes arrived in the mail