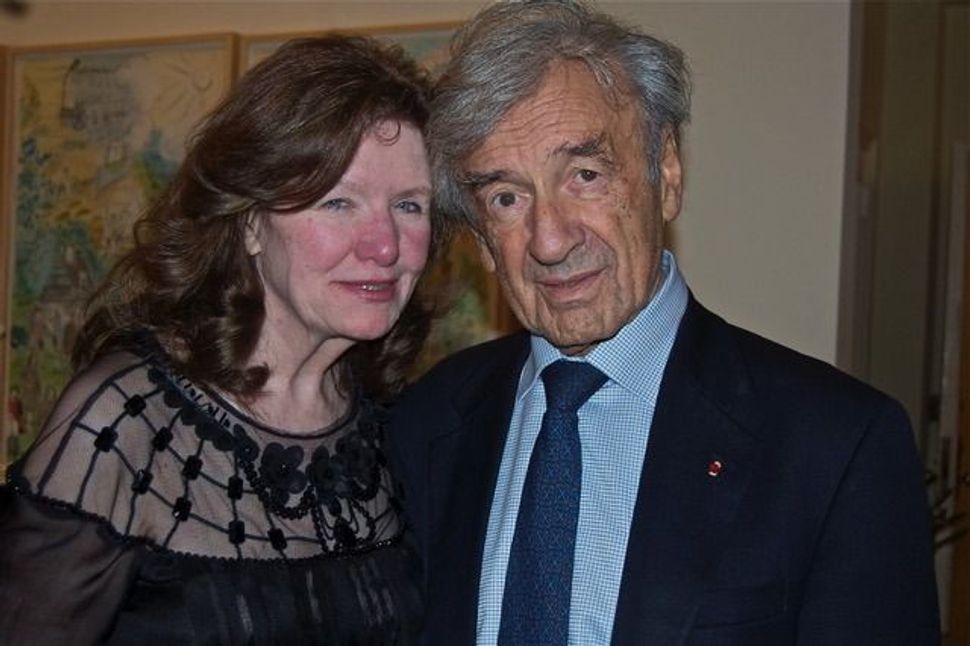 Elie Wiesel and the author. Courtesy of Caroline Stoessinger

Elie Wiesel made a commandment of memory. Whenever my students ask why they should study history, I always respond with a quote from Elie, who lived the answer: “Without memory, there is no culture. Without memory, there would be no civilization, no society, no future.”

Elie constantly reminded us of the power of memory. “If there is a single theme,” he wrote, “that dominates all my writings, all my obsessions, it is that of memory because I fear forgetfulness as much as hatred and death. For if we forget, we are accomplices.”

For fifty years, I saw firsthand his authenticity and his sterling character as an author, humanist and teacher. I remember when, a few years into our friendship, the young husband of a friend died suddenly. The distraught widow asked me to invite Elie to speak at his funeral, but I was hesitant. Although she had met the Wiesels briefly at my home, I was unsure if Elie had had a chance to speak with her husband. With a prelude of apologies, I posed the question. Elie immediately answered “Of course, I will speak. A life has been lost.”

Many have wondered how Elie could have had such a compassionate and generous personality after Auschwitz. Despite all he suffered, Elie never deviated from the traditions of his ancestors. He ended his last public speech expressing gratitude to the audience and said “we have so many prayers of gratitude; before I open my eyes in the morning, I must say a prayer of gratitude.” He believed in memory as the road we must travel if our species is to survive. So long as he had breath Elie kept hope alive, saying “I still believe in man in spite of man.”

During his lifetime Elie continually spoke out for victims of oppression and wherever he talked people listened. Relentlessly he confronted power.

Elie didn’t hesitate to chastise President Reagan’s decision to visit a German burial site, which included Nazi officers. He criticized President Clinton, as well. At the outdoor dedication of the United States Memorial Holocaust Museum in Washington, D.C., he turned to the President, seated in the front row, and said, “I cannot sleep for what I have seen. Mr. President, you must do something to stop the killing in Bosnia.”

The Nobel Committee, in their citation for his Peace Prize, defined Elie for all ages as “a messenger to mankind.” President Obama hailed him as “the conscience of the world.”

For many years I would frequently host Elie and his family, trying to cook his favorite foods: potato soup with dill, schnitzel fish filets, asparagus and butter roasted new potatoes, salad of Boston lettuce and Hazelnut Cake. In summer, Elie relished watermelon for dessert. We talked of becoming vegetarian and fantasized about buying a French Village. He would be the Chief of Police and appoint me as mayor.

One evening during a snowstorm, we shared a taxi. When asked for our destination, Elie commanded “follow that car.” Following the randomly selected car in front of us, the driver accelerated too quickly, the car spun before stopping in the middle of Broadway. Laughing, Elie asked, “do you think I scared him?”

Elie was my friend for more than 50 years. I miss him each day.

Caroline Stoessinger, a pianist, is the author of A Century of Wisdom: Lessons From the Life of Alice Herz-Sommer (Random House 2012), on which the Academy Award-nominated short documentary, “The Lady in Number 6,” is based.