It’s like talking to a wall! Justice & inclusion at the Kotel 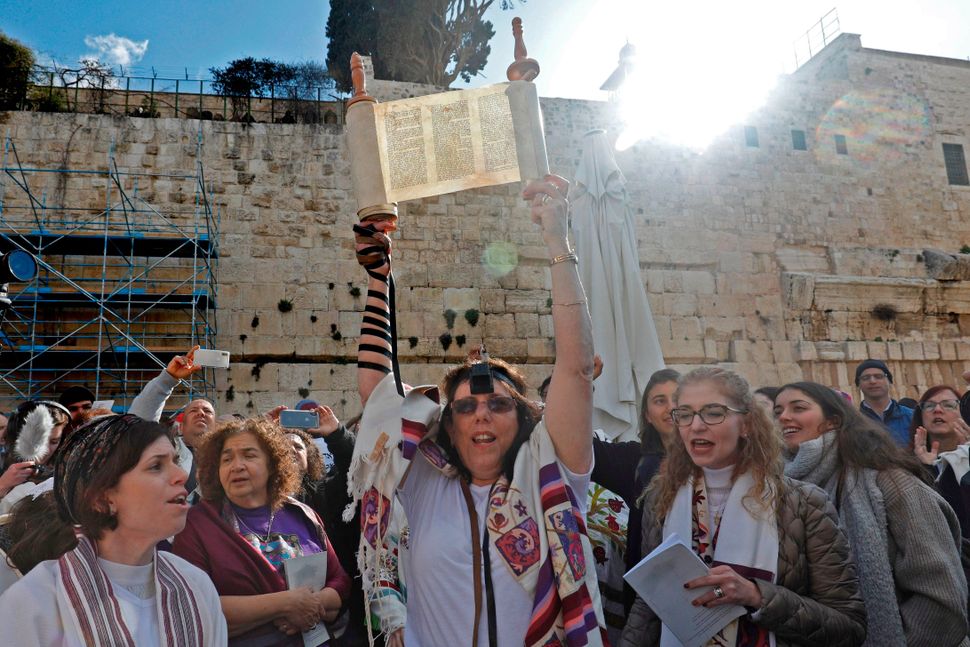 Members of the group Women of the Wall hold the Torah and wear Tefillin and Talit as they celebrate the first day of the month of Adar Bet in the egalitarian section. (March 2019) By Gali Tibbon via Getty Images

One of my favorite Jewish jokes involves a tourist watching an elderly Jew praying with fervor at the Kotel (the Western Wall). Day after day the tourist witnesses this devotion and says nothing. Finally, unable to hold back anymore, the tourist approaches the old Jew and asks, “You pray so regularly and with such intensity. How do you do it? What is it like?” The Jew frowns, thinks a moment, and then sighs, “It’s like talking to a wall!”

Sometimes I feel that we, too, are talking to a wall. That ancient partition, the Kotel, is the outer casement of the Second Temple, all that remains of the central edifice of biblical Judaism. The Wall has provided the geographic focus of Jewish prayer (literally, Jews pray toward that spot whenever we pray), a powerful symbol of unity and resilience. A home for all Jews.

Until recently. Since the reunification of Jerusalem in 1967, the Kotel has transformed into a synagogue, and a strictly Orthodox one at that! Men and women must pray separately in courtyards segregated by a high wall (Mechitza), the Torah scroll is read only on the men’s’ side, and only by men. Women are not allowed to read from a Torah in their section. The public face of the Kotel is male, orthodox, and exclusionary. There is no room there for our streams of Judaism. There is no welcome for us. 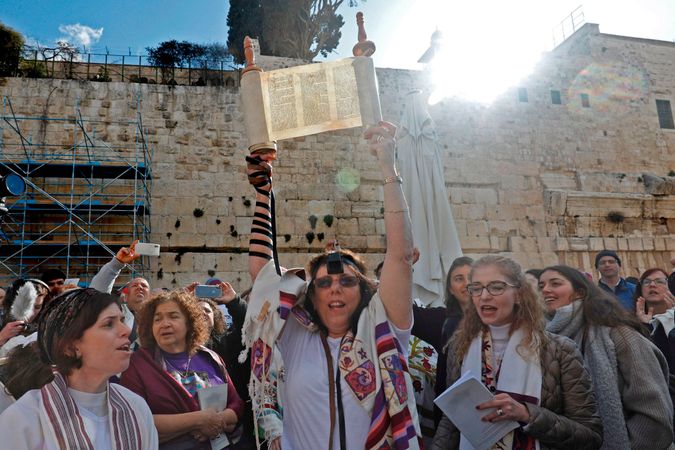 Members of the group Women of the Wall hold the Torah and wear Tefillin and Talit as they celebrate the first day of the month of Adar Bet in the egalitarian section. (March 2019) By Gali Tibbon via Getty Images

I have just returned from a delegation to Israel of Conservative Jewish scholars and leaders, meeting with Israel’s new government to help correct this injustice. Even as we discussed solutions with members of the Cabinet, the topic erupted again as front-page news. In the small, peripheral, unkempt portico allocated for egalitarian prayer services, adjacent to the glorious, central, splendid section of the Orthodox Kotel, a band of zealots interrupted our spirited Shacharit, forcibly imposing a mechitzah (barrier separating men and women) and tried to drown out the brave men and women who were resiliently trying to celebrate their Judaism.

This wasn’t the first time, nor the last, that fundamentalists intruded themselves in a religious attack meant to banish a large segment of the Jewish people from the place that has become a world-renowned symbol of Jewish identity and continuity. Time and again, fundamentalist thugs have flung feces, torn prayerbooks, assaulted people at prayer. These attacks would be self-evident crimes in any of the world’s democracies, resulting in prosecution for assault and for Antisemitism. But in Israel, the world’s only Jewish state, it produces endless handwringing, sporadic expressions of sympathy, and postponed action.

On behalf of the millions of Conservative, Reform, Reconstructionist, Renewal and non-denominational Jews, I join my colleagues in calling on the Government of Israel to deliver on its promises and those of the previous Government.

Open conversations with Israeli legislators should launch a new sense of family and belonging for all, alleviating a significant portion of what alienates many younger Jews. Along with ameliorating the suffering of Palestinians and addressing broader issues of social services and reform for all Israelis, this embrace of real religious pluralism would go a long way to affirming the bonds that link Israel with the large numbers of American Jews whose love for Israel can feel, well, like talking to a wall.

Rabbi Dr. Bradley Shavit Artson holds the Abner and Roslyn Goldstine Dean’s Chair of the Ziegler School of Rabbinic Studies and is Vice President of American Jewish University in Los Angeles. He is also dean of the Zacharias Frankel College in Potsdam, Germany, ordaining Conservative rabbis for Europe.

It’s like talking to a wall! Justice & inclusion at the Kotel