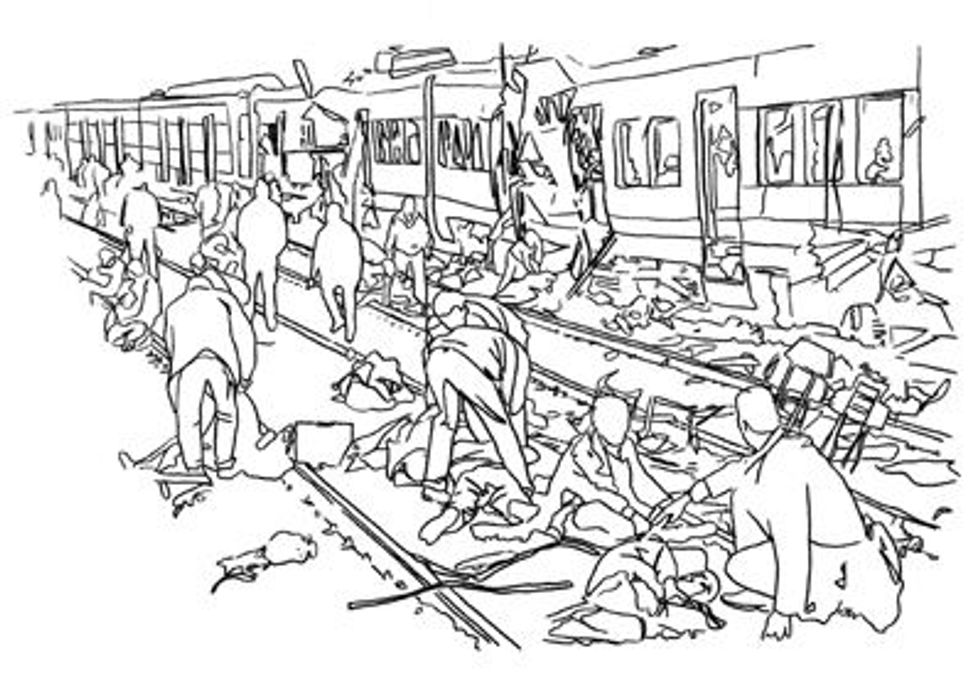 The Medium is the Message: Being scrawled on the wall in black marker is part of the point for Hubert Czerepok whose ?Seance? records wreckage. Image by Courtesy braniCke Gallery, berlin

Following the collapse of the Twin Towers in 2001, German composer Karlheinz Stockhausen was caught musing that the event was “the greatest work of art that is possible,” a statement that provoked widespread outrage and led to the cancellation of several concerts of his work. Though New York Times music critic Anthony Tommasini, among others, perceived Stockhausen’s words as “an affront,” they continue to reverberate, as critics, curators and artists weigh in on the complicated relationship between aesthetics and violence.

In the wake of 9/11 and of Stockhausen’s comments and Damien Hirst’s echoes of those comments, thinkers such as Slavoj Zizek (in his book “Welcome to the Desert of the Real”) and Paul Virilio (in his book “Art and Fear”) have tried to unravel our fascination with the violent “spectacle” — arguing that violence is sometimes also aesthetic, as uncomfortable as that may be. 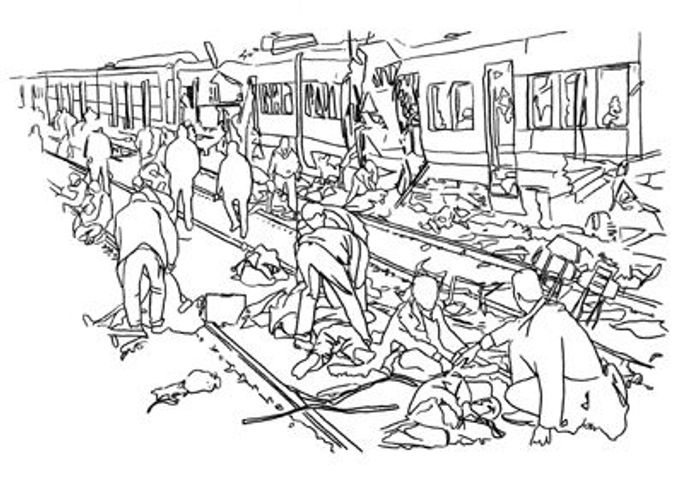 The Medium is the Message: Being scrawled on the wall in black marker is part of the point for Hubert Czerepok whose ?Seance? records wreckage. Image by Courtesy braniCke Gallery, berlin

It is this exploration that Israeli curators Tami Katz-Freiman and Hadas Maor tapped when they began organizing an ambitious and wide-ranging cluster of exhibits on violence, on display at the Haifa Museum of Art. Israel, no stranger to violence, offers the perfect, if unfortunate, backdrop for art that seeks to deal with the subject of violence and its ability — or inability — to represent it.

Leading Israeli artists, including Sigalit Landau, Gilad Efrat, Michal Heiman and Yael Bartana, as well as such renowned international artists as Norbert Bisky (Germany), Ernesto Neto (Brazil), Lida Abdul (Afghanistan) and Biljana Durdevic (Serbia), explore violence and the different responses to it in a series of eight exhibitions that take up the entire three-floor museum — including the stairwell and the entranceway. The implication is that there is no way to escape: Violence is everywhere.

The ubiquity of violence did, in part, inspire the series, but among the range of complex political, philosophical and psychological contexts, you will find no straightforwardly documentary approaches.

“We made a decision to create distance, to understand the filters artists are using to represent violence,” said Katz-Freiman, chief curator. “We see violence everywhere; it overwhelms our existence. But I was interested in what happens when you turn this into art, and how artists respond to the spectacle of violence.”

Ironically, violence weighed heavily on the process of curating the current exhibits. The project is the brainchild of Katz-Freiman, who has been working on it for the past two years. It was delayed because of significant budget cuts following the Second Lebanon War, which reduced the number of new exhibits the museum could afford. In a further irony, the display opened on January 24, one week after the operation in Gaza ended, with the sounds of rockets and bombs still reverberating in the Israeli psyche.

But the recent war did more than simply provide an unfortunate context altering not only how the exhibit would be viewed, but also what would be seen. Viewers cannot miss an empty black room where a video of Artur Zmijewski, considered to be one of the most prominent, radical figures on the Polish art scene, was supposed to be. It took almost two years to acquire Zmijewski’s “Them,” a piece that looks at ideological fanaticism, for the exhibit. Katz-Freiman told the Forward that she saw it as a central building block of the exhibit, and so she scheduled significant educational programming around it.

But a week before the opening, Zmijewski, who is currently an artist in residence at the Digital Art Lab in Holon, Israel, wrote an e-mail stating that in light of the operation in Gaza, he did not want his video to be exhibited, as it is no longer “relevant.” He offered instead a video piece based on an anti-war protest that took place in Tel Aviv one day before the cease-fire. “Although we freaked out, we said we are open to see his other work,” Katz-Freiman explained. “We are liberal and open-minded.” But after seeing the video two days before the opening, the curators decided against it. “We thought it was a very simplistic art work which doesn’t have the layers and artistic depth we are looking for,” Katz-Freiman said.

This year has been designated Polish Year in Israel, and despite Zmijewski’s withdrawal, Poland is represented by Power Games, an exhibit co-organized in Warsaw by the Adam Mickiewicz Institute. The exhibit comprises a range of works created by six prominent visual artists currently working in Poland, and features members of three different generations. Despite their obvious differences, contemporary Polish and Israeli artists seem to share a preoccupation with victimhood, history, nationality and memory. Katz-Freiman, who visited Warsaw and Gdansk in December 2006, was struck by an overwhelming concern with the trauma of World War II. “It seems that the War has become a central component of the search for identity undertaken by many Polish artists,” Katz-Freiman writes in her introduction, showing that while the artistic response to violence is personal, violence is — like political power — centralized and vested in the state.

One painting that is especially representative of the exhibit’s themes is by Bisky, a young German artist whose work is one of three solo exhibitions that are part of the exhibit Aesthetics of Violence. “Schwarzmaler” (“Painter of Darkness”), painted in bright colors reminiscent of neo-pop images, features an artist painting a flame from a black cloud of smoke that seems to be erupting out of the blue sky. Bisky captures a moment of strange duality: the artist who creates catastrophe while contemplating aesthetic nuances, such as color and form. His work seizes the uncomfortable affinity between beauty and horror, what Zizek calls our simultaneous attraction to, and repulsion of, violence. But it also touches on the larger themes of translation — turning violence into art, or seeing aesthetics in violence.

But one of the most disturbing pieces is also one of the most understated. A video by Israeli artist Lea Goldman Holterman shows a 12-year-old boy, with bright blue eyes and a serious gaze well beyond his years, describing his deep commitment to the State of Israel, his longing to serve in a combat unit in the Israeli army and his willingness to die for his country. Though intent, the boy speaks in a monotonous, ghostlike voice, as if part of him has already been killed on the battlefield. The video’s title, “Sacrifice,” brings to mind a host of provocative questions: Is the child choosing to sacrifice himself? What kind of free will does a child of 12 have? And as such, is the state sacrificing him, and at what price?

“This gives me goose bumps every time I walk by,” Katz-Freiman said of Holterman’s video.

The allusion to the biblical story of the Akedah — the sacrifice of Isaac — lends an added layer of meaning to this already suggestive piece. Conspicuously missing from the video are the respective killer and savior, the father and the angel. It is unclear who is doing the sacrificing, and whether there will be a redeemer who jumps in at the last minute to save the child from the sword. It doesn’t appear so.

This video, like many of the pieces in this exhibit, is its own type of “affront,” to use Tommasini’s words again. It exposes us to deeply disturbing images and stirs in us uncomfortable feelings, but in the end it gets us to think about the often contradictory relationship we have to violence and its increasing presence in our lives. The pieces disturb us in a different way than the terror attacks of 9/11, and that’s in part the point of the exhibits, which offer the most compelling response to Stockhausen’s provocative but mistaken remarks.

The terror attacks were a real event, unmediated and raw, while art is, by definition, one step removed from reality. And while it, too, may affront us, it does so with a different end in mind. Two wall paintings by Hubert Czerepok, a young Polish artist, are a perfect demonstration of art’s transformative power. From his series “Séance” both wall drawings are re-creations of documentary photographs — one of the Madrid bombings, the other of a figure surrounded by skulls. The transformation was a process of emptying out the images so that what remains is a minimalist sketch with a lot of white space. Though inspired by photographs of terror, the effect is entirely different. Here, one becomes aware of the skeletons — both literal and figurative — that terror leaves in its wake, as empty, hollow space.

That awareness is what art, and these exhibitions, aim for.