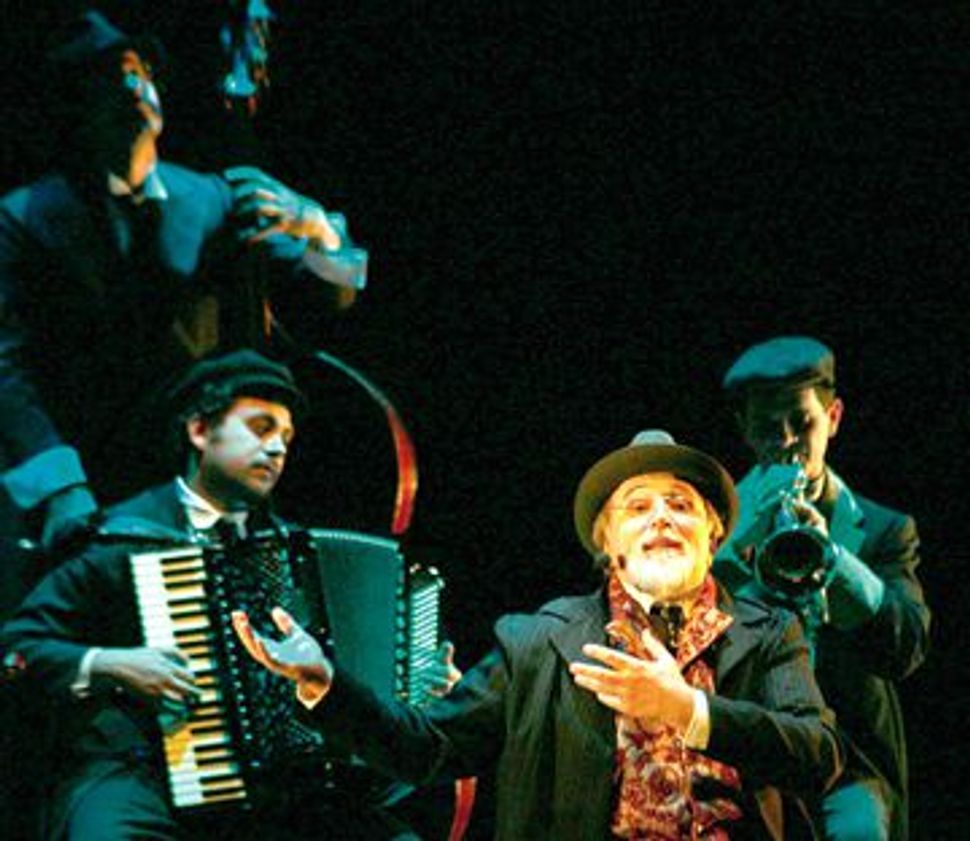 As Moni Ovadia prepares to come to New York, we ask, “Why would several hundred elegant Italian theatergoers choose to spend New Year’s Eve at a one-man show about Jewish humor and angst?”

Even as snow falls on Milan’s fabled Piccolo Teatro, the lobby is crowded with theatergoers queuing up for tickets. An answer can be found in the playbill for Moni Ovadia’s “Oylem Goylem.” At the core of Ovadia’s performance is ’il suono dell’ esilio’ — the sound of exile. 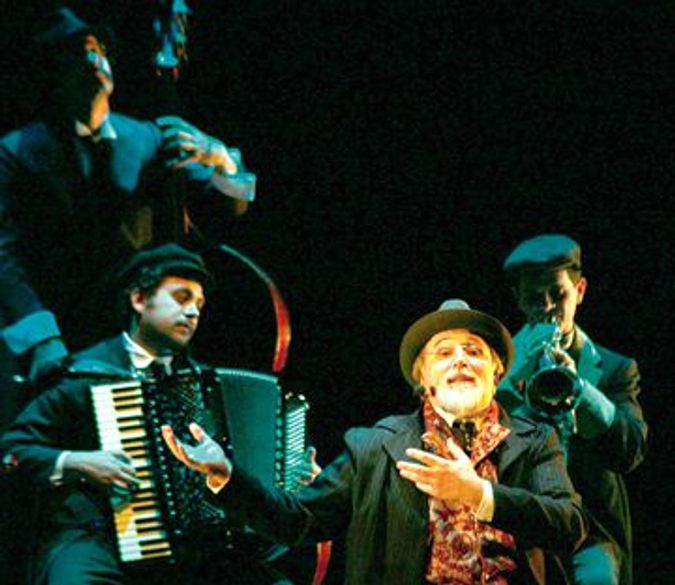 While the Diaspora is a uniquely Jewish theme, why wouldn’t it resonate with Italians, many of whom carry the reality of exile in their genes? During my visit, several Milanese friends mentioned having relatives somewhere in America. Indeed, today the descendants of Italian emigrants are more numerous than the kin they left behind in the old country.

“Oylem Goylem” traces the 3,000-year-old Jewish saga of faith and wandering through a kaleidoscope of dramatic devices — morality play, theater of the absurd, performance art, cabaret shtick. It makes for a new Yiddish theater for postwar generations.

But what of this strange title drawing in crowds while across town, Verdi’s “Don Carlo” is featured at Teatro alla Scala? Oylem goylem, a Yiddish contraction of olam (the world) and Golem, translates in Italian as “Il Mondo é scemo,” or, “The world is stupid.”

Onstage, Ovadia sits wearing a narrow-brimmed gray fedora, slowly peering at the audience: the Jew as ‘everyman’ from the destroyed shtetls of Europe.

Rimless glasses down his nose, he sports a mustache and a short white beard, makes eye contact, then extends his palms: ‘Sono Simcha Rabinowicz….” (“I am Simcha, and I sell shadows. Who do I sell them to? To folks who’ve lost theirs…. A shadow can get lost because of too much light, or too much darkness…. Too much vice or too much virtue… but the vicious ones are my best customers….”)

Behind him, seven members of his Stage Orchestra, dressed as traditional klezmer musicians, grab their instruments, waiting for a sign. It comes as Ovadia concludes the story of a cantor who butchers the krekhz (chant) during the holy service. As the distraught performer leaves through the back door, he is stopped by a fan who lavishes praise on his performance: “Are you also a cantor?” he asks the fan, surprised. “Not at all,” comes the reply, “I’m a butcher. “

As the audience rocks with laughter, Ovadia rises, dancing to “If I Were a Rich Man” from “Fiddler on the Roof.” Switching from Italian, and in an exuberant baritone, he launches into the song’s Yiddish lyrics. Rarely spoken, even among the 30,000 Jews said to be living in Italy today, the largely Catholic audience seems to relish Yiddish’s foreign yet warm, expressive sound.

The show’s title came about some 20 years ago, as Ovadia and a rabbi friend of his were walking down one of Milan’s main streets. His companion suddenly stopped by a store window. Inside were torn jeans, chains and all kinds of teen paraphernalia. “You wanna buy?” Ovadia joked. The rabbi sadly shook his head, repeating, “Oylem goylem, oylem goylem.” The expression stuck.

It was a “magical fit” for a play Ovadia was writing, an opus about Jewish history meant for a gentile Italian public largely unschooled about how the destruction of Eastern Europe’s Jewish culture was not only monstrous, but also cosmically dumb. “Humanity needed what cosmopolitan, mobile Jews had for centuries contributed to countries where they lived,” Ovadia said in an interview with the Forward, quoting the martyred Yiddish writer Isaac Katzenelson, whose poem he turned into an oratorio titled “Dybbuk” in 1995: “Stupid goyim, you killed off the Jews and killed off part of yourselves.”

The show offers an original mélange of comic storytelling, chants, and commentaries on Yiddish culture and its destruction, as well as short literary readings, including one from Kafka, all spliced with lively musical interludes. As strange as this may be to the Italian “entertainment” experience, this repertory performance is, according to Ovadia, a hit around the country. On smaller stages, he’ll trim down his 140-minute Milan act and bring along a reduced number of his faithful musicians — several of whom have been with him for more than 10 years.

Even when the characters he impersonates — rabbis and priests, Jewish merchants and yiddishe mames, or even New York psychiatrists — verge on caricatures, his affection for them shines through.

In 1992, Ovadia took an earlier version of the show — called “Golem” — to La MaMa in New York City’s East Village. In his review, Bernard Holland of The New York Times wrote: “Dark indeed is the world of the wandering European Jew in Mr. Ovadia’s vision.”

Its dark vision now leavened with humor, “Oylem Golem” has become a staple of Ovadia’s repertoire. In 1996, it was invited by legendary director Giorgio Strehler to open at his rebuilt Piccolo Teatro.

In the intervening years, “Oylem Goylem” has toured Italy, Israel and Europe, presenting a total of nearly 1,000 performances, with Ovadia spinning his stories in eight languages — including Russian and Modern Greek.

Despite its popularity, “Oylem Golem” is only one of a number of dramatic works by the prolific and socially committed 63-year-old playwright. With a register that spans broad farce to tragedy, Moni, as he is known to most Italians, has penned some three dozen stage works, many of which are recorded on DVD. His most recent, “La Bella Utopia” (2007), chronicles the collapse of the Soviet Union and Stalin’s treatment of the country’s Jewish elite. In 2002, he wrote a musical linking the persecutions of Jews and Gypsies. Ovadia wants to be known as an ebreo (Jew) who, through his creations, mourns and fights not only for his people, but also for all those who are victims of persecution or, worse, genocide.

Indeed, those many strands come together in his make-up and upbringing. Born in Bulgaria as World War II ended, the 4-year-old Salomone quickly became Moni when his Sephardic family settled on the outskirts of Milan amid a community swelling with Jewish refugees. At home, Greek, Serbian and Ladino were spoken. And music came into Moni’s life early: He sang in school choirs. This talent was nurtured by his mother, whose career as a violinist was frustrated by the war. With his elder brother, he discovered jazz and imitated the voice of Ray Charles in the house basement. Later, traditional American slave music, some of the many voices of human suffering, seeped into his compositions.

Overhearing Shoah survivors in his neighborhood engaged in conversation, he thrilled to the sounds of Yiddish. “Sound is where it all started for me,” he remembered.

One day, peeking into a small synagogue, Moni watched the Hasidim pray, jostle, argue and chant. “Sholom Aleichem right in front of my eyes, here in Milan, can you imagine?” Hooked, he decided to build a cabaret act around the Hasidim’s rituals in order to open a window unto a culture unknown to a curious Italian audience.

Sitting in the art-filled loft he shares with his wife, Elisa, a costume designer who crochets the iconic caps he wears on- and offstage, Ovadia looks more like a middle-aged intellectual than a popular actor. He projects the relaxed mien of someone in full possession of who he is, minus the hubris that often mars showbiz success.

In talking about his plays, Ovadia said that he wanted to create “a modern form of theater that would bring our past history into the present. To me, the best proof that I get my message across [in any language] is that more than half of my audience is made up of young people. [But my work] will never be Chagall postcards for Japanese tourists.” Could this be a sly reference to the New York production of “Fiddler on the Roof,” a musical that Ovadia directed in a less “folksy” context for an Italian run?

Yiddish theater, he believes, “teaches you to live with your tsuris [troubles], and you don’t have to be a Jew to have tsuris!” This is why, he says, audiences respond to Yiddish humor and the travails of its people wherever he happens to perform.

“Yiddish is much more than a language or even a people; it’s a masterpiece of humanity,” Ovadia continued, with a passion rooted in everyday experience. “The reason Yiddishkeit spread all over Europe was because a Jew’s homeland was mobile. He could communicate with others in his language, talk to God and study the Torah wherever he landed. A Jew could say, ‘I speak 72 languages, all in Yiddish.’”

Then, as his hand slapped the wooden table, his voice deepened: “We have almost lost this. As long as I’m alive and there is a stage where I can play, Yiddishkeit will not become extinct — not with my complicity. “

Nor with the complicity of Italian fans offering the ultimate accolade: a standing ovation.