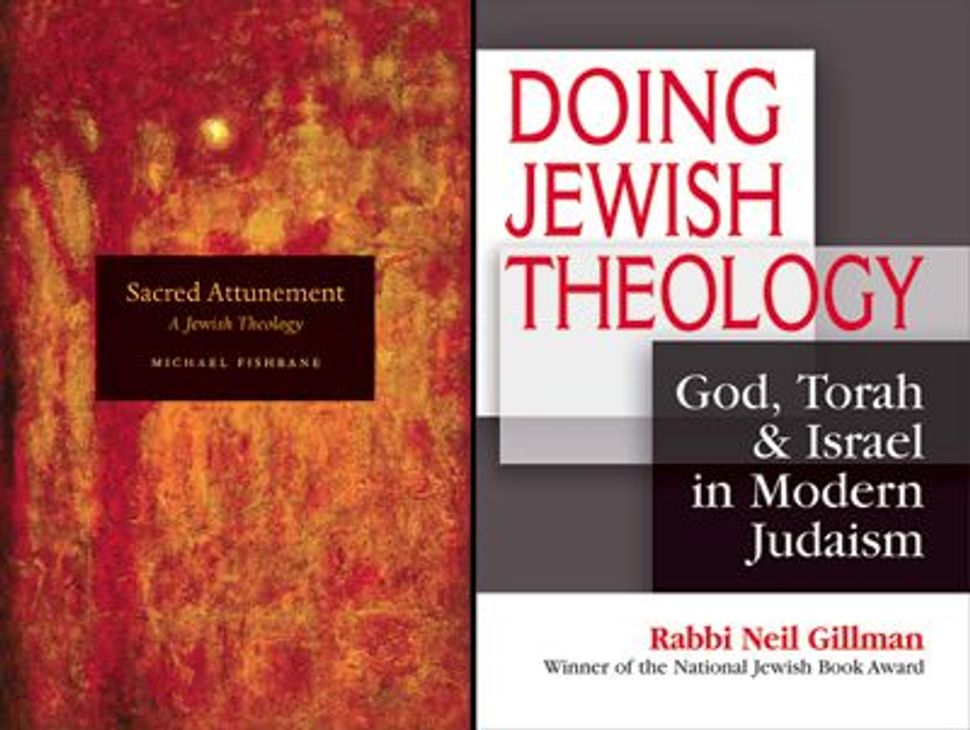 On a recent Rosh Hashanah, one of our preschoolers stopped me in the hallway of the synagogue and asked me, point blank, “Is God real or pretend?” Adults often ask the same question, though rarely as directly or even aloud. And when they do ask, it is very much an adult question, born of the heartache of difficult faith.

Two books, both published in 2008, deal in different ways and in different styles with many of the aspects of this modern predicament. 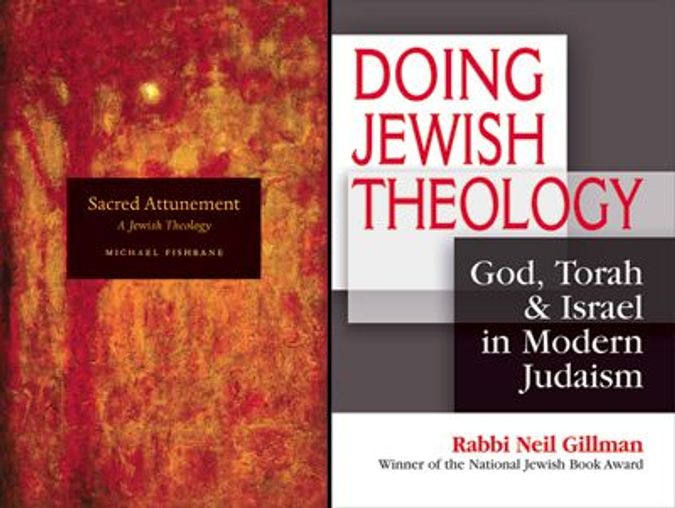 “Doing Jewish Theology” is a collection of essays by Neil Gillman, former dean of the Jewish Theological Seminary’s Rabbinical School. He is also a longtime professor of Jewish philosophy at the JTS. Gillman is a prolific and influential teacher who has come, over the years, to delight more and more in being a gadfly — a challenger of many comfortable shibboleths in Jewish thought, and especially within Conservative Judaism. The essays here range back to 1985, and their topics cover a broad spectrum: personal, historical, institutional, and the big questions of creation and the end of days.

From engaging material on Gillman’s personal theological journey, fascinating insights into JTS and Conservative Judaism, musings on Abraham Joshua Heschel, reflections on the paradoxical functioning of liturgy and ritual and on the “embrace of tension” in Jewish theology, Gillman’s presentation is, as always, lucid and thoroughly accessible to the nonprofessional reader.

Reviews of anthologies should draw out the leitmotifs implied by the selections, so it’s important to note that in this anthology, we see the words “metaphors,” “midrash” and “myth” repeated again and again throughout Gillman’s lectures and papers. These have been vital words in his teaching for decades now, and they are about reminding us that, as he puts it, “we never capture ‘reality’ as it is. Rather, we construct reality.” Not that Gillman is a solipsist — he believes in a world outside his own thoughts — but, not unlike Kant, he wants us to be sure not to miss the crucial distinction between things as they are and things as we experience them. All our depictions of reality — that is, our metaphors, midrashim and myths (large frameworks of meaning) — are at least a step removed from reality itself.

For Jewish theology, this can make those people who are comfortable with the status quo squirm. It means that Torah never speaks with just God’s words; it means that holiness is framed through human convention, and it means that prayer and ritual are complex acts of imagination. Gillman, a Jew whose life includes a practice of prayer and of ritual, grapples with the question he reports being asked repeatedly: “How can you pray to a metaphor?”

These are not necessarily new formulations. Gillman follows Kaplan, whose “reconstruction” of Judaism put community at the center of its constellation. And in saying that there is no “pristine formulation of Torah that embodies the very words of God,” he echoes the way in which Heschel harmonized historical scholarship on Scripture with traditional views of Scripture’s sanctity. In fact, Gillman is a traditionalist in a most fundamental way, inasmuch as he follows the principle that Maimonides understood to be of the very essence of all Jewish teaching: that we are to learn to avoid every form of idolatry. In this case, to mistake human depictions for reality — even to mistake the words of Torah (“heard,” recorded and transmitted by human beings) for the very thoughts of God — is to commit that cardinal sin.

Michael Fishbane’s “Sacred Attunement,” while not explicitly autobiographical, is in many ways a very personal work. Fishbane, who is Nathan Cummings Professor of Jewish studies at the University of Chicago’s Divinity School and has produced wide-ranging scholarship on the Bible, exegesis and religious thought, tells us in his acknowledgments that the book’s early life was as a “spiritual testament” to his family. His readers must now be deeply grateful that they were invited into these reflections as they grew, but the original, more private, quality of those reflections remains and adds power to the overall work. This is not to say that the general reader will have an easy time of it; there is a certain amount of philosophical jargon that can present a stumbling block to nonprofessionals. But sticking with Fishbane in this profoundly honest quest for authentic theological expression will be well worth it.

At the very outset, Fishbane engages us by candidly admitting that rather than aiding in the human soul’s perennial search for meaning, his own academic profession often focuses on procedural issues in scholarship, or on the recovery of original contexts. Thus, he identifies some of the sources of the alienation faced by seekers of faith in the contemporary world in what the analytic tools of his craft can unwittingly produce: “endlessly deferred” meaning; the felt absence of a “coherent or compelling world view”; how the constant unraveling of scriptural narratives makes “the models of selfhood they represent become threadbare” and “adversely affect our personhood.” Indeed, although we are built to seek the transcendent, those perceptions are inevitably found to be both “nowhere and everywhere.” One has the sense that this tension between the commitments of mind and soul produces an urgency in all this for Fishbane, and this is surely one of the aspects of this book that draw in the reader. Though Fishbane is, by profession, a scholar, he insists that theology is not just about thinking, but rather about living, as well, and it must be a “discipline of ethical and spiritual self-cultivation.”

His weapon against this looming alienation is “natality.” By this, he means the power of human consciousness to effect a reawakening and rebirth, and thus to overcome the habituation and routinization that deadens the religious spirit. In this, he is continuing a theme he wrote about in his 1994 book “The Kiss of God: Spiritual and Mystical Death in Judaism” (University of Washington Press), where he wrote of the interplay between religious duty — which promotes continuity, but can become routine — and religious longing for God to confirm the spiritual quest, which is necessarily to be found in radically awakened, and very personal, religious experience. Fishbane is keenly aware, as is Gillman, of the inescapability of the divine-human partnership in revelation, and of how God’s primal thunder, heard at Sinai, will necessarily be converted into words, so as to make communal existence possible. He knows, too, that we must recognize this to avoid the sin of idolatry. But he is not satisfied with that observation, because he knows that while translation into human language and forms is unavoidable, that very process can degenerate into mere inherited behavior patterns devoid of the immediacy of faith. And he even worries about the ways in which his own primary field of exegesis — so central to Jewish life — can end up missing the forest for the trees: neglecting divine reality, while getting caught up in what too easily become pleasurable but soulless word games.

A great reverence for tradition permeates “Sacred Attunement.” Among the many mem ble phrases are descriptions of Halacha as “the gestures of the generations,” and of the obligation of Talmud Torah as “submission of the self to the gift of the generations.” Yet while the generations may present us with a foundation, to accept that gift as an adequate life of faith is to commit what Heschel called “spiritual plagiarism.” And so, Fishbane leads us through the ways in which the traditional modes of Torah study (known as Pardes, and often written with p, r, d and s capitalized as an acronym for the four approaches to biblical exegesis in rabbinic Judaism) cannot only illuminate words that are not ours, but also increase our mindfulness and our “attunement” to the divine reality manifest in the world. And he demonstrates, in writing about Halacha*, *how such rituals as prayer and the Sabbath attach us to tradition for only the higher purpose of attaching us to God. In a compelling formulation, he writes of the withdrawal from the workaday world demanded by the Sabbath as a “divestment of will for God’s sake” and, even more starkly, as “dying within life for love of God.”

There is surely a deep mystical element in all this, and Fishbane does not make any effort to hide it. He invokes repeatedly the mystical notion of the torah kelulah, the all-encompassing, not-yet-unpacked Torah, first brought to our attention from a medieval source by Gershom Scholem (in “The Meaning of the Torah in Jewish Mysticism”). It is this primordial Torah that is, according to Fishbane, the only Torah that can properly be thought to be “of heaven” (min hashamayim), and from which our sacred scriptural traditions — both written and oral — are derived. He therefore insists that theology “has the primary duty of serving God alone — not some particular religious formulation or tradition.” This insistence on separating authentic religious thought from the practices hallowed by particular traditions is no more antinomian than was Mendelssohn’s version of this idea in the 18th century (though I suppose Fishbane may fall prey to the same kinds of popular distortions that promoted misunderstandings of Mendelssohn).  But unlike Mendelssohn, for whom reason was the signature element of true religion, Fishbane is urging upon us the higher truth — that of religious experience — as the only answer to the despair of finding transcendence, a despair with which our world continually threatens us.

To read “Sacred Attunement” as a discourse is, I think, to risk getting bogged down and miss the book’s power. I did that at first. Then I focused on my own perplexities and my own still unfulfilled quests, and began to read it again. Suddenly, with the very same words, I was deeply engaged in what is a nuanced, personal and very adult guide to the experience of faith. And as for my preschooler’s question? “Sacred Attunement” provides an answer that is often lyrical, one of which I believe Neil Gillman would also approve: Yes, God is real. But we truly learn this not in the same way that we do science, nor by merely accepting authority, but rather by awakening our souls. Or, to echo the words of Paul Tillich: We find God not as we meet a stranger, but rather by attuning ourselves to overcome estrangement.