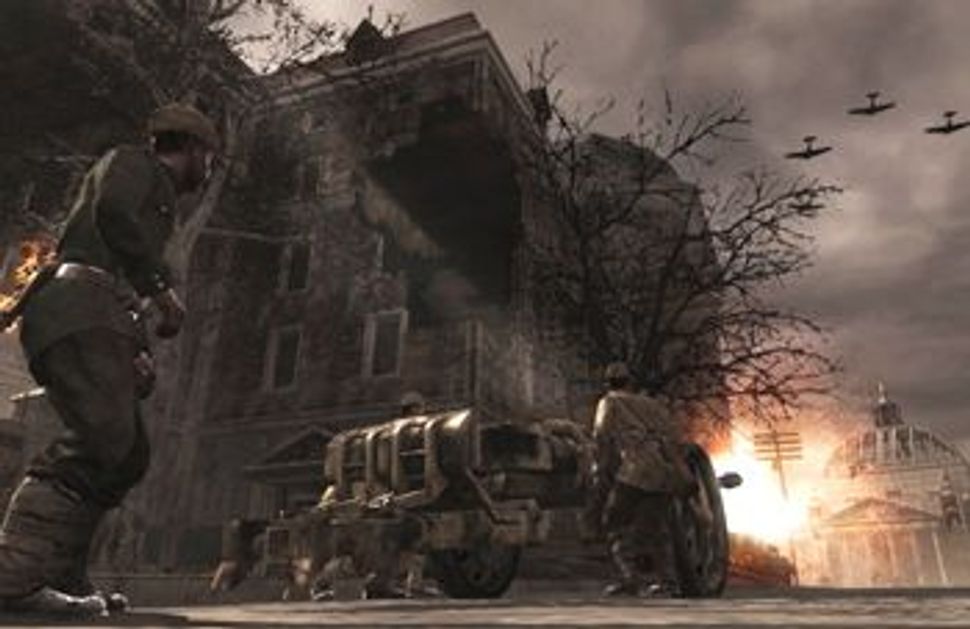 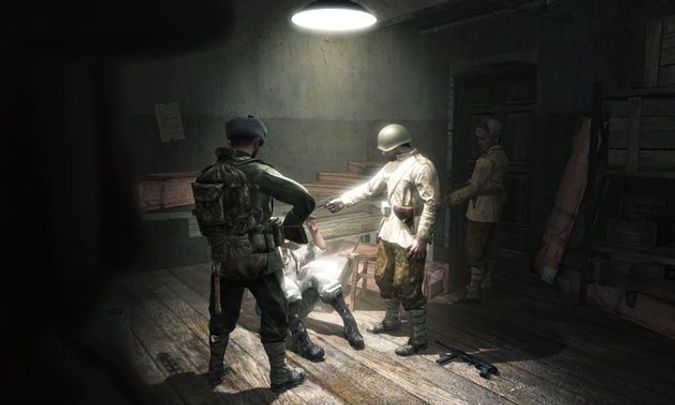 You ask, what is our aim? I can answer in two words: virtual victory. Virtual victory at all costs — despite all terror: The Churchillian imperative is in full force throughout “Call of Duty: World at War,” but playing, in addition to being just plain fun, is also an incredibly visceral experience, especially for Jewish players.

Over and above their ease of use, story and visual appeal, video games can also become important cultural experiences when the creators make the world psychologically significant to the user. By making a World War II video game that is more realistic, and with more opportunities to make choices than any previous one, software developer Treyarch has created a game that can provide deep insights about violence, history and the Nazis’ significance as psychological demons. It is also qualitatively superior to other shoot-’em-ups, because of the elegant game-play and the surprisingly varied pacing of the complexly textured story. 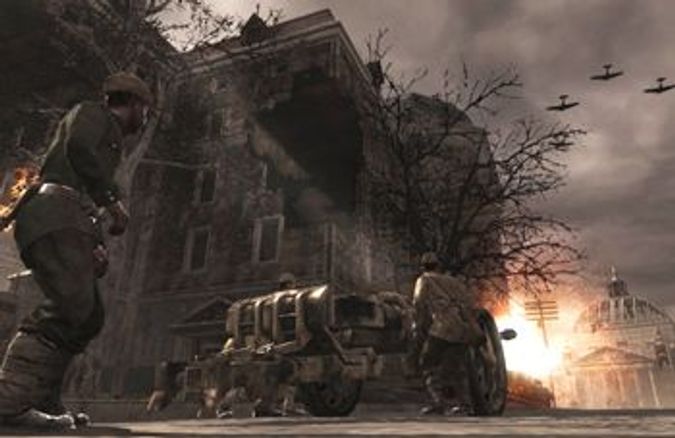 Video games are instructive in a personal way that books are not, because whatever the limitations, the player makes the decisions: You navigate a character (your avatar), and that becomes your character. This process of identification removes your detachment from what is happening on the screen and scatters it into what is happening in your *real *life.

This is the fifth glittering installment of “Call of Duty.” It follows the extremely popular “Call of Duty 4: Modern Warfare,” which pitted the player against Muslim and Russian Nationalists. In this installment, you fight in battles from the end of the war, such as Stalingrad, Peleliu and Seelow Heights. In the U.S. Army in the Pacific theater, you are Private Miller; when you are in the Soviet Red army, you are Private Dimitri Petreko.

The game culminates in a thrilling battle between the Red Army and the Nazis in the Reichstag. You fight all the way up to the famous bombed-out dome, then see the defeated German army from the roof and the city of Berlin in ruins. There is simply nothing in video games that compares to storming the Reichstag.

As a Jew, being involved in virtually ending World War II allows you to experience the closest thing possible to killing the sense of victimhood created by the Holocaust. And you do it without actually hurting any real people. In fact, it’s so satisfying that when you get to shoot down the golden eagle on the Reichstag, while sniping headshots at flame-throwing Nazis, you simply don’t want the war to end. This is weird, of course, because the war’s end is the ultimate goal of the game, as well as your desperately fought aim in real life.

The realistic portrayal of violence in video games is often decried. But those who would disparage these games for being too brutal would be those who would condemn them for not showing the realities of war. It is because of its violence that the game ushers in some of the feeling of the intensity of the battlefield.

“Call of Duty” is incredibly bloody. In earlier versions, the graphics were often comical, with grenaded Nazis flying through the air like hurled vacuum cleaners. But in this one, you can immediately see the stumps of blown-off limbs. I am pretty sure one of my bullets penetrated someone’s eye, because he immediately moved his hand up to his eye socket after I shot him. Bodies crumble instead of toppling. Corpses remain on the ground or slumped on tanks or hanging out of windows.

The nonviolent atmosphere is also very detailed. When you have your character look up, the sky looks different depending on the time of day; when he looks down, you sometimes see puddles. But you have to be careful when you do either, because if you marvel too long at Treyarch’s aesthetic achievement, you will get a bullet in the ear.

A real-world side-effect of playing too much “Call of Duty” is a particular form of overspill. Familiar to anyone who has played too much of an electronic game (I have behind me, as Churchill said, “many, many long months of struggle and suffering”), overspill is when you see the virtual world in your real world. Occasionally, walking down the street of Brooklyn’s Park Slope, I have looked at the roof of a particular brownstone, thinking I should be careful, because “that would be a great place for Panzershaft.” And while some might suggest that this phenomenon is proof that the game can encourage animus toward a contingent “enemy,” I can say only that in my case, this overspill was not accompanied by any hateful emotion. It only made my nannified neighborhood more exciting.

This is the first “Call of Duty” where one can play the campaign with other users online. Through your headsets, you can speak to each other and build camaraderie with your team, sharing the experience of the virtual war. You also can revisit the sites of the battles and play against other people. It’s like a virtual game of Capture the Flag. The computer assigns you a team, so you might even find yourself fighting on the side of the Wehrmacht, which feels uncomfortable but becomes an educational experience, like seeing “Das Boot.”

In my time spent playing the online version, and despite the M rating, I encountered more than a few children who sounded as if their parents still attached their mittens to their coats. The good thing about playing against kids, however, is that they tend to name themselves things like “justabanana.” So my Xbox would inform me, “You were killed by justabanana.” This sort of feels nice and makes you cheerfully disentangle yourself from the intensity of the game for a moment. But unwelcome reminders of the real world also spill in, like when you are virtually killed by an adult whose user identity is “Ihatejews666.”

For all the effort that the creators took to make the action convincing, there are serious shortcomings, especially to your freedom. This highlights the still limited state of video games more than it does the missteps of the games’ creators. Most notably, the story consistently pushes you onward to more battle, with barely any freedom to pursue alternatives to fighting. At one point, I found myself in a decimated Berlin library and tried to get one of the sympathetic minor characters, Chernov, also a writer, to go and look at the collection. But he just pointed his bayonet forward, telling me that we had to keep up with the troops. Another time, I did not want to leave Chernov behind to die alone after he experienced a vicious attack from a Nazi who jumped out from behind a pillar, so I tried to put him out of his agony with my rifle. But the game wouldn’t let me. After trying to pull the trigger, I had to move on and leave him. In addition to having to live with what virtual violent decisions I actually made, I would have to live with what I would have done.

Although “Call of Duty: World at War” goes to great lengths to show some of the complexity and tragedy of war, there are no bystanders in the game. No emaciated Jews or Japanese children running down the street in terror. The horrors of war are significantly underrepresented. Realism? Yes. But reality? No. The realism is an aesthetic in service of entertainment.

But, from time to time, the game stakes its claim to be taken seriously. You watch as two Germans, on their knees, crying “Bitte,” are executed by your comrades. Before you enter the U-Bahn, you, too, are asked by your commander to kill some surrendering Germans. If you refuse, someone else throws a Molotov cocktail at them anyway. Because you are in the midst of storming Berlin, you see how war can make one choose killing over capture — but it’s deliberately jarring. There isn’t a “Disarm and send on their way” button in the game, and it would be hard, I imagine, to press it in real life.

The surprising benefit of the game was that throughout my entire life, since sneaking into the synagogue library with David Yagobian and paging through a book of Nazi medical experiments, I have had nightmares about Nazis. Jewish summer camp didn’t help. In games like “Call of Duty,” you get unlimited lives; you keep playing the game until you are victorious. It’s a safe place. When your character dies, you may have to go back to a checkpoint, but this is simply inconvenient, never tragic or final. You will always have another chance to kill your demons.

One morning, I woke up extremely aware that I had just had a Nazi dream. No surprise, given that I wrote this review and played the game late into the night. But I was shocked that it did not scare me as it would have done in the past: The back of my neck was dry. The game had subconsciously flipped a switch. Although clearly there are still very real threats to Jews around the world, the feeling that Nazis were a threat to my existence was created by teachers and rabbis, rightly making sure that I knew my history. In truth, that specific anxiety was not real, but virtual. And I could vanquish it virtually, as well.

One of the tragedies of World War II, and war in general, is that it puts simple dichotomies, as opposed to realistic complexities, into our minds. Although on the face of it, “Call of Duty: World at War” rewards violent methods, its overwhelming gore and possibilities for playing the heartbreaking dilemmas of the other side, present the opportunity to put those methods into context.

Training ourselves with games like this can help us resist simplistic oppositions and the brutal desire for violent justice. Understanding the horrors of war through playing games that illustrate the complexities of violence may even help us resist the real thing.

Micah Kelber is a writer and freelance rabbi who lives in Brooklyn. He is currently writing a screenplay about divorce in New York in the 1940s.