The Evil of Two Loessers? 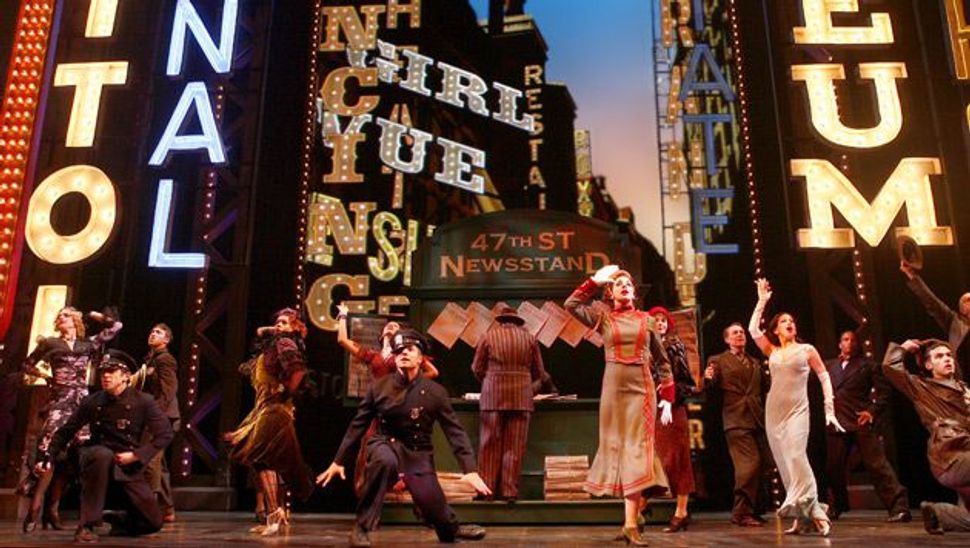 Song and Dance ?Guys and Dolls? returned to Broadway on March 1.

“Alright already, I’m just
a nogoodnik.
Alright already, it’s true, so nu?
So sue me, sue me,
What can you do me?
I love you.”
–From the Frank Loesser musical “Guys and Dolls”

These immortal lines, sung by gambler Nathan Detroit to his long-suffering girlfriend Adelaide, remind us — just in time for a major Broadway revival of “Guys and Dolls,” which opened March 1 — of why this 1950 work still rings true.

The composer-lyricist Frank Loesser (1910–1969) was born in New York to a German-Jewish family of high cultural accomplishments. His father, Henry Loesser, was a piano teacher, as we learn from Thomas L. Riis’s “Frank Loesser” (Yale University Press), as well as from the recent PBS documentary “Heart & Soul: The Life & Music of Frank Loesser.” In 2006, Loesser’s daughter, the artist Susan Loesser, explained to NPR that her family has always consisted of “very snobbish German lovers of classical music. They thought that popular music was trash — that’s probably one reason that my father was smitten with it and wanted to become a popular songwriter.” While earning his spurs in garish Tin Pan Alley, Hollywood and Broadway, Loesser had the further chutzpah to speak with an affected working-class Lower East Side inflection (as if deliberately assuming the persona of Nathan Detroit), thereby choosing to appear a product of the gutter, which duly irked his high-toned relatives.

Among the most annoyed was Frank Loesser’s brother Arthur (1894–1969), a magisterial pianist and teacher who held court in Cleveland for decades, wrote acerbic reviews of fellow musicians, and generally remained a lifelong thorn in his brother’s side. Indeed, both Loesser brothers could be so devastatingly sharp-tongued to each other and strangers that at various times both were called the “evil of two Loessers.” The famous “Fugue for Tinhorns” in “Guys and Dolls” was doubtless a sarcastic tip of the hat to Loesser’s classically trained father and brother, showing gambling lowlifes singing a mock version of a musical form ennobled by classical music deities like Bach. Although Frank Loesser’s family were “always pretty condescending” to him, his daughter, Susan, emphasizes, they “really did love him, and he loved his mother, of course, and was deeply fond of his brother.” This abiding affection in the midst of perennial strife may seem a paradox to those unfamiliar with the inner workings of Ashkenazi families.

Frank Loesser himself apparently saw no contradiction in the coexistence of reverence and bellicosity, loving and fighting. After all, one of his biggest early hits was 1942’s “Praise the Lord and Pass the Ammunition,” inspired by the legendary response of a U.S. military chaplain during the attack on Pearl Harbor. This call to divinely inspired resistance and refusal of wartime martyrdom was echoed in Loesser’s songs about the battle of the sexes, as in another early hit, 1944’s “Baby, It’s Cold Outside,” This teasing dialogue of seduction and resistance is still irresistible, whether recorded by Ella Fitzgerald and Louis Jordan or in a Hebrew version by the Israeli stars Limor Shapira and Israel Gurion. The same combative, yet loving, tension is personified in “So Sue Me” from “Guys and Dolls” — given a specific ethnic slant by the casting in the original production of the delightful Sam Levene (1905–1980) as Nathan, and in 1950s revivals by Walter Matthau (1920–2000) and Alan King (1927–2004) in the same role. Sadly, the grotesque miscasting of Frank Sinatra as Nathan in the uneven 1955 film “Guys and Dolls” paved the way for less authentically ethnic portrayals of Nathan (including bizarre choices like Patrick Swayze and Don Johnson in a recent London production).

Does it matter whether Nathan is portrayed in an obviously Jewish way? It would have mattered to the Kansas-born Damon Runyon (1880–1946), the journalist upon whose faded 1920s Broadway stories “Guys and Dolls” is based. As Daniel R. Schwarz’s “Broadway Boogie Woogie: Damon Runyon and the Making of New York City Culture” (Macmillan, 2003) reminds us, Runyon’s tales were rife with Jewish characters depicting the kind of Lower East Side Jews (nicknamed “shawls and whiskers”) whom Frank Loesser was drawn to, and whom the rest of his assimilated family shunned). Runyon’s Jews are flavorful, two-dimensional stereotypes named “Jew Louie,” “Sam the Gonoph,” and “Izzy Cheesecake,” the last a gangster ironically described by Runyon as “slightly Jewish, and he has a large beezer [nose].” Yet unlike grimly antisemitic writers of the time like F. Scott Fitzgerald, Runyon expresses affection for his Jewish creations. Indeed one of Runyon’s closest real-life friends, who may have partly inspired the character of Izzy Cheesecake, was Otto “Abbadabba” Berman (1889–1935), a Jewish mob accountant and adviser to the notorious Dutch Schultz.

These ethnic connections are to be treasured in Loesser, as in Runyon, although in his best works the Broadway composer always managed to spiritually unite his characters regardless of ethnicity. In “Guys and Dolls,” a high point is the camp-meeting fervor of “Sit Down, You’re Rockin’ the Boat, presented as a dream of a cataclysmic trip to heaven, mixing gambling metaphors with apocalyptic overtones.

In the new Broadway production, the gifted Tituss Burgess, as Nicely-Nicely Johnson, will doubtless give an authentic gospel flavor to the fearful shouts of this repentant gambler. Yet even more important than repentance for Loesser was the unified ensemble, a coming together of different sensibilities united in love — like the disparate Loesser family, who despite their mutual offenses could agree upon a common bond of shared affection. This message, also conveyed in the otherwise extraneous “Brotherhood of Man” number from another Loesser hit, 1961’s “How to Succeed in Business Without Really Trying,” confirms that the only real evil for Loesser would have been that of disunity, or lack of love. In its new umpteenth revival, “Guys and Dolls” will surely exemplify that complex love, which Loesser so brilliantly expressed in words and music.

To learn more about the new Broadway production of “Guys and Dolls,” see the show’s official Web site.

The Evil of Two Loessers?