Watering the Milk of Human Kindness 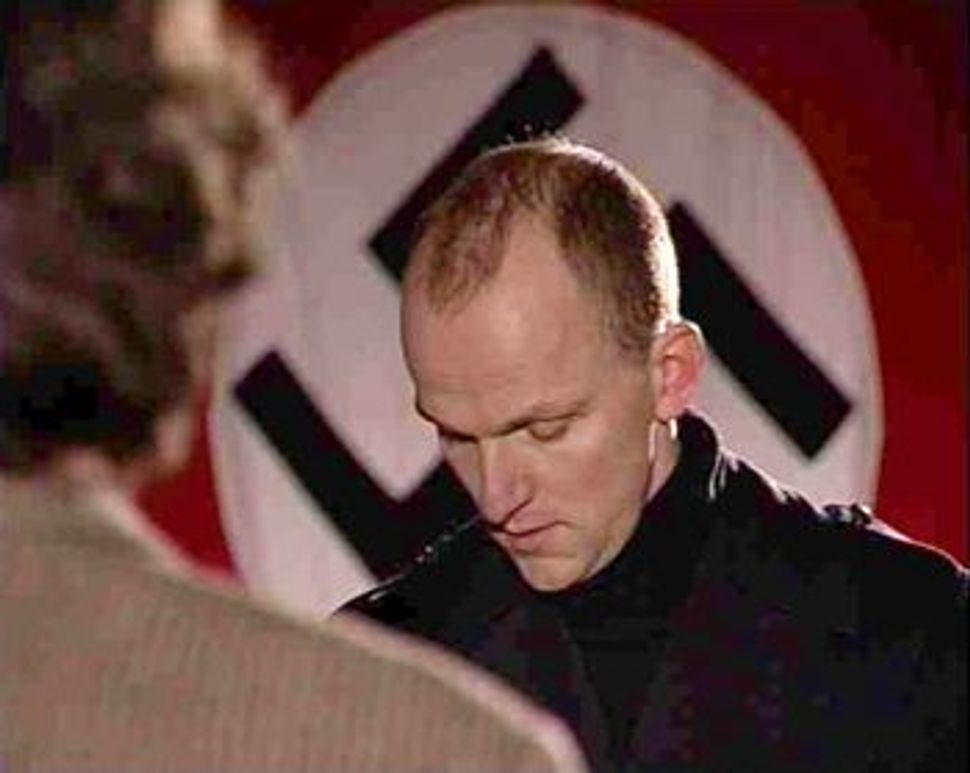 A Gay Jew in Nazi Berlin: Gad Beck?s lover Manfred portrayed on celluloid. Image by COURTESY DOES AND CACKETT 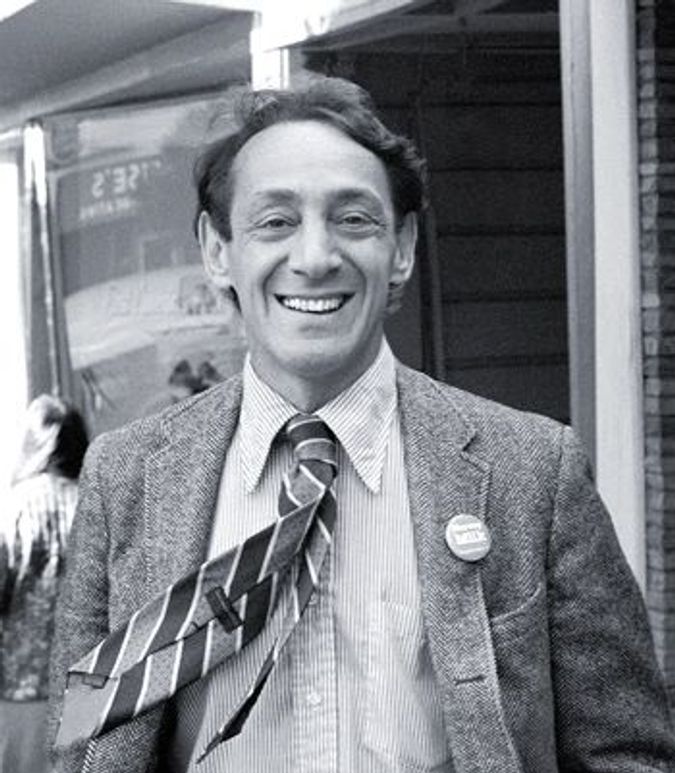 See the Film, Buy the Book, support the Opera, Rent the DVD: For gay Jews, charisma and achievement sell better with an untimely end. Image by DAN NICOLETTA 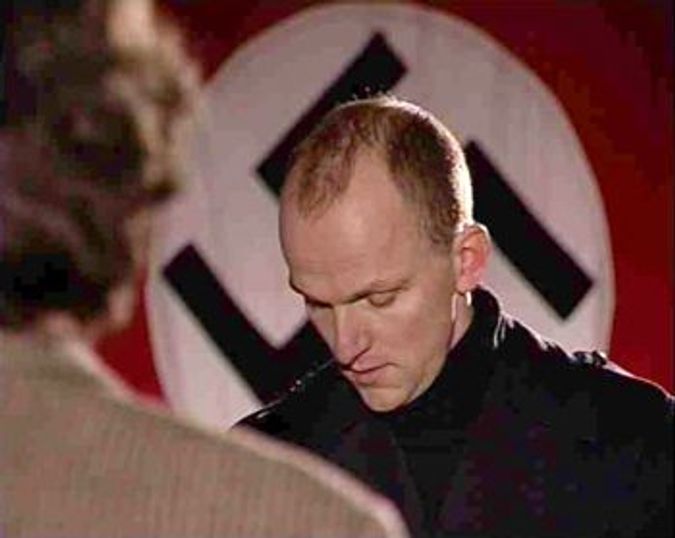 A Gay Jew in Nazi Berlin: Gad Beck?s lover Manfred portrayed on celluloid. Image by COURTESY DOES AND CACKETT

Yet “Milk” itself falls into the all-too-familiar stereotype that for Hollywood film executives, the only valid stories about gays must end with premature demise. The 2005 hit “Brokeback Mountain” was another flagrantly grim example; even in the 1960s, if two Wyoming ranch-hands like those in “Brokeback” fell in love, they would have bought a ranch and lived happily ever after, some critics have reasonably complained. Despite the honors accorded to “Milk,” Hollywood still cannot envision a story in which gays live long, productive lives, so it is fortunate that filmmakers elsewhere are waking up to the reality that early, violent deaths like Harvey Milk’s are not the only ones worth filming.

Far from Hollywood, a case in point is Gad Beck, born in 1923 and still thriving. A film adaptation of his lively autobiography, “An Underground Life: Memoirs of a Gay Jew in Nazi Berlin” (published in 1999 by The University of Wisconsin Press) is currently in production, with a screenplay written and directed by noted Israeli director Eytan Fox. Beck was interviewed in a 2000 documentary, “Paragraph 175,” — a title referring to a 19th- century German law amplified in 1935 as a legal excuse for Nazis to imprison gay people. Beck was also the subject of a 2006 German-language documentary “The Story of Gad Beck” by filmmakers Carsten Does and Robin Cackett, which further explains how through pluck, luck, and innate sassiness, Beck. survived against all odds. As a defiantly exuberant elder, Beck’s liberated narrations confound those who prefer to focus on victims, whether Jewish, gay, or both, whose lives ended in their youthful prime.

However much Hollywood is lured to the James Dean paradigm of “die young, stay pretty,” it is obvious that survivors, and not just martyrs, have compelling and inspiring lives. Another such was Herbert List (1903-1975), a gay photographer of partly Jewish descent who spent the war years forced into army service as a map draughtsman. List’s idyllic prewar photos, such as “Ritti with Fishing Rod-1937” have been copied by decades of film production designers to typify an era, although the story of List himself still remains largely untold. Does a full lifespan like List’s contradict the all-important “arc” taught in screenwriting classes? Such classes usually cite a rule attributed to Chekhov that “if you show a gun in the first act, you’d better use it by the third,” and by this kind of crude logic, merely introducing a Jewish gay person in a film is a prefiguration of a quick disaster, like the clichéd fate of ensigns in Star Trek or African American characters in horror flicks. A rapid, untimely demise may provide a neat conclusion to any film, but does not really reflect the reality, not to mention the ideal, of Jewish gay experience.

Another gay Jewish war survivor who has likewise been ignored by Hollywood is the British poet Siegfried Sassoon (1886–1967), son of a prominent Baghdadi-Jewish merchant family of India. Sassoon survived horrific trench warfare during World War I, writing gritty poems about the experience, only to later fall into a decades-long unhappy love affair with a cross-dressing young British aristocrat, Stephen Tennant. Sassoon’s true story, if ever filmed, might establish that dangers for Jewish gays can emanate from the British aristocracy as well as from wartime persecution. Despite the evident dangers they faced, neither Beck, List, nor Sassoon died young nor stayed pretty, but their survival alone should hardly disqualify them from Hollywood’s attention. The recently published oral history, “Ask & Tell: Gay and Lesbian Veterans Speak Out” (University of North Carolina Press, 2007) provides further cues for stories about people who faced down danger and did not die in the first or second act of their stories.

A gay Jewish politician does not have to be shot for his life to have meaning, as readers of a forthcoming biography which will appear this fall, “Barney Frank: The Story of America’s Only Left-Handed, Gay, Jewish Congressman” by Stuart Weisberg (University of Massachusetts Press) will doubtless realize. From decades more effort than poor Harvey Milk had the chance to make, Barney Frank has created an infinitely more important legacy on behalf of gay and lesbian Americans, but where is the film about his life?

Even lives less dramatically affected by historical cataclysm can reflect the values of pride in identity and concrete achievement. Aaron Copland (1900–1990), during a long life devoted to peaceful creativity, attained the status of a quintessentially American composer. Copland’s works are frequently performed and recorded by the U. S. Marine Band, even though the composer was a gay Communist Jew, an irony which musicologist Nadine Hubbs underlines in her intriguing “The Queer Composition of America’s Sound: Gay Modernists, American Music, and National Identity” (University of California Press, 2004).

Some of the most dramatic — yet, to Hollywood producers, still too implausible for multiplex audiences — stories of Jewish gay non-martyrs may be about domestic upheavals entirely unrelated to world events. The acclaimed Hungarian Jewish poet György Faludy, (1910 -2006), author of the autobiographical novel “My Happy Days in Hell,” dumped his male lover of 36 years standing to marry a 26-year-old female poet, Fanny Kovács. Then the nonagenarian Faludy posed for racy photos with his scantily clad bride, which duly appeared in the Hungarian edition of Penthouse Magazine. Faludy’s raucous behavior, like his famously unruly hairstyle, was part of his innate exuberance and lifelong politically incorrect status. Can such diverse and sometimes self-contradictory complex natures ever attract Hollywood, or are we doomed to more films like “Milk,” which offer reductive versions of stories, neatly rounded off with the depressingly familiar, final sound of gunfire? Fortunately, the innovative independent filmmaker Eytan Fox and his upcoming fictional treatment of Gad Beck’s story look likely to make whatever Hollywood does, or does not do, quite irrelevant.

After all, “Brokeback Mountain” had no visible effect on the lives of American gays and lesbians, and Sean Penn’s recently announced plans to have Harvey Milk’s birthday named a “day of significance” in California by getting a bill passed which was already vetoed last year by Governor Schwarzenegger smacks more of a Hollywood dream scenario than reality. Art, however well-meaning, very rarely affects social change; in 1995 an indubitably sincere opera, “Harvey Milk” by composer Stewart Wallace premiered to mixed reviews, with the “New York Times” castigating its “kitsch and religious vulgarity,” such as portraying Milk as a “latter-day Moses; led by a white-clad messenger, he peers into the Promised Land of homosexual equality that he cannot himself enter.” Just as the operatic staging of Milk as Moses had no lasting resonance, so his screen hagiography by Van Sant, set to a lachrymose soundtrack by composer Danny Elfman, may also evanesce. It remains unclear how putting forth the case of yet another martyr helps the cause of Jewish gays and lesbians today.

Watering the Milk of Human Kindness