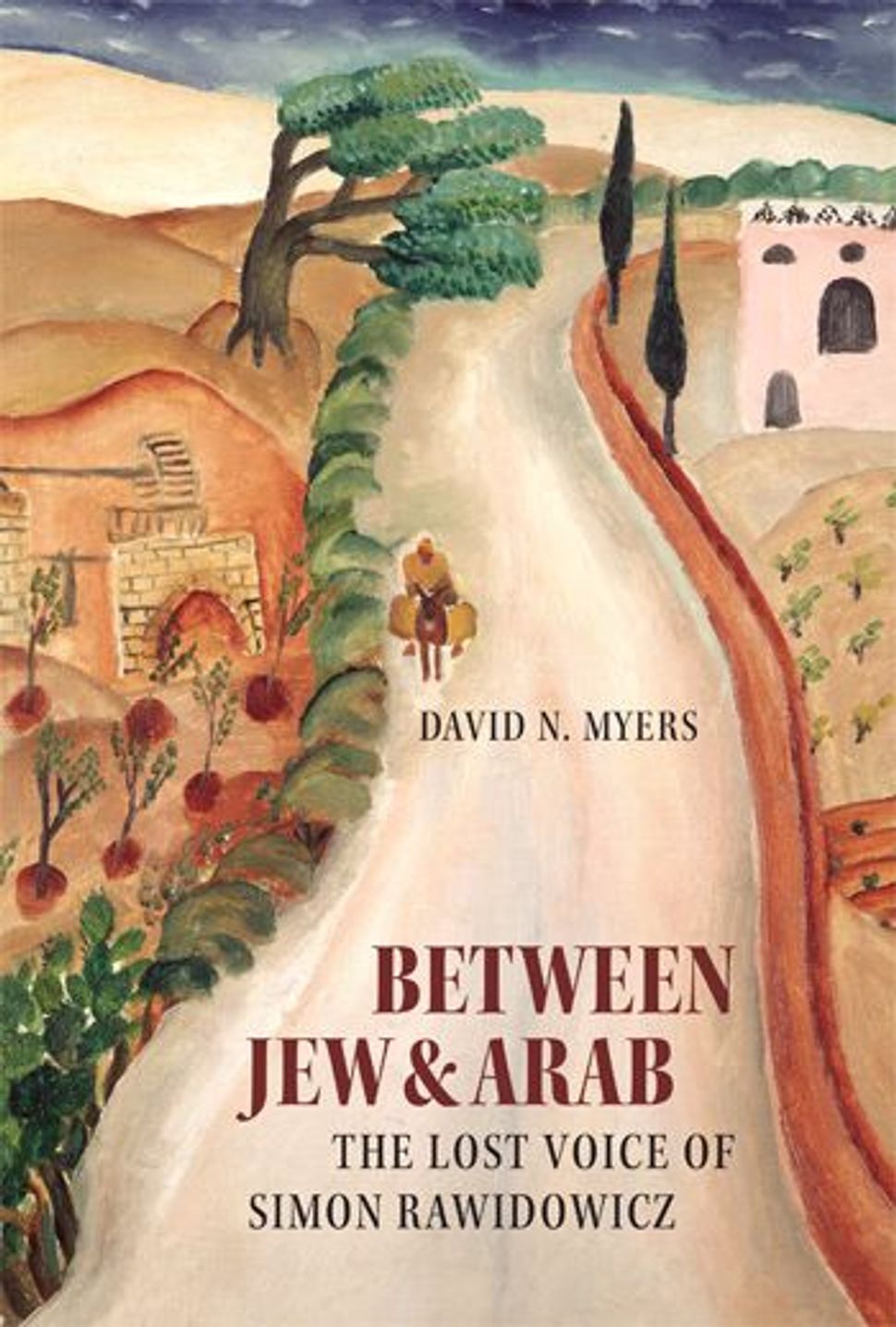 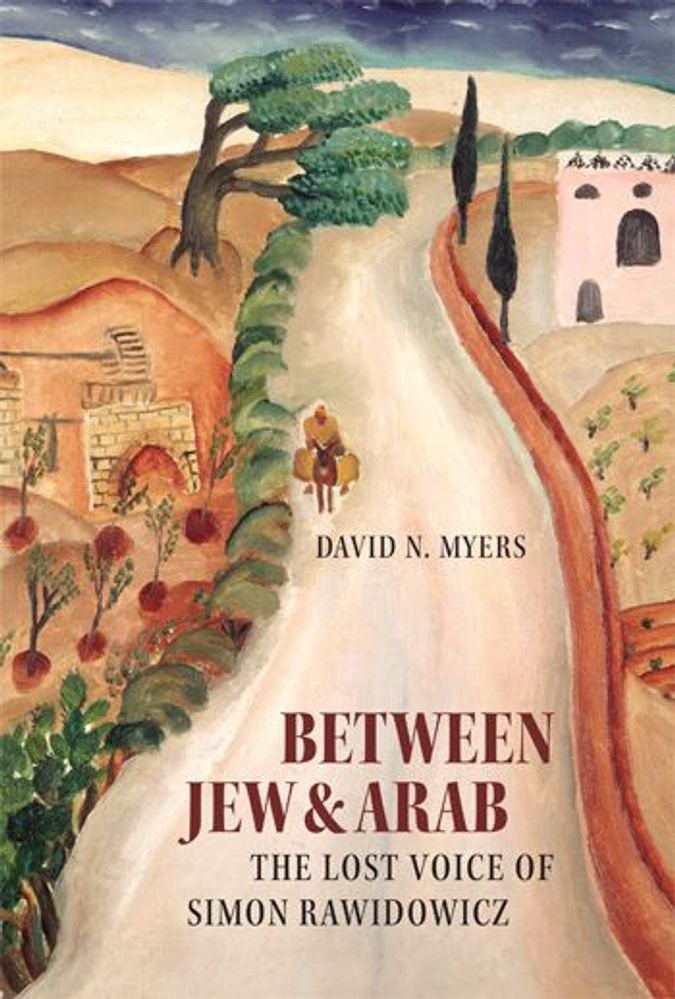 Ask any Jew you know, even one who has a university degree in Jewish studies, who Simon Rawidowicz is. I am willing bet the response will be, “Simon who?” At best, you may get, “Didn’t he once teach at Brandeis a long time ago?” That itself is sufficient cause for David Myers’s new book, “Between Arab and Jew: The Lost Voice of Simon Rawidowicz.”

Myers, a professor of Jewish history and director of the Jewish studies program at University of California, Los Angeles, has written extensively on the history of Zionism and, in particular, about the development of what he called the “Palestineocentric” construction of Jewish studies in the Israeli academy. His work offers a much-needed examination of the cultural and intellectual effects of Zionism on Israel and on the Diaspora of Jewish identity. In this lucid, informative and important book, Myers explores the life and work of a figure who is one of the most underappreciated Jewish voices in the latter half of 20th-century America. An ardent Zionist writing in America, primarily in Hebrew, Rawidowicz is also almost unknown in Israel. His commitment to Hebraism in the Diaspora was unassailable, but it has contributed to his almost total lack of recognition.

The book is based on one fairly brief, unpublished essay by Rawidowicz, titled “Bein ‘Ever le Arav” (literally, “Between Hebrew and Arab”; translated by Myers as “Between Jew and Arab”), that Rawidowicz wrote after moving to Chicago and then to Waltham, Mass., from England to begin a professorship at the newly formed Brandeis University. The essay was written sometime between 1951 and 1953 and was intended to be included as an appendix to his two-volume “Bavel ve Yerushalayim,” (“Babylon and Jerusalem”) published in 1957. For reasons unknown, Rawidowicz chose not to include this essay, which is the main underlying justification for Myers’s study.

The essay is a scathing critique of Zionism from one “who was a probing critic of Zionism without being an anti-Zionist.” But Rawidowicz was also different from other Zionist critics of Zionism, such as Martin Buber, Judah Magnus and the Brit Shalom circle. He studied in Europe with the celebrated Religious Zionist Rabbi Y.Y. Reines and Rabbi Moshe Avigdor Amiel, who was the chief rabbi of Tel Aviv in the 1930s and a leader of the Mizrahic movement. In short, he emerges from deep inside the classical Religious Zionist tradition.

Rawidowicz was not, borrowing Buber’s term, a “Hebrew Humanist.” His criticism of Zionism was not primarily born of compassion for the Arab cause (although be believed Arabs had a right to be a part of the Jewish state); it came mostly from his firm belief in the moral virtue of a multiethnic statism and out of fear that Zionism was becoming “cruel” (in its negative relation to both the Diaspora and the Arab minority), and thus the Jewish state was founded on immorality, which he feared could “disable the Jewish national body,” undermining what he hoped Zionism would produce.

In particular, Rawidowicz attacked “The Nationality Law” passed by the Israeli Knesset in April 1952, a law Rawidowicz — among others discussed in Myers’s introduction — argued was fashioned as a discriminatory policy against Arabs living in Israel, creating unreasonable barriers to citizenship (Myers reproduces the legislation in translation). Myers argues that while the repatriation of Arabs was a central concern for Rawidowicz, “The Nationality Law” was no less troubling for him — perhaps even more so, because it indicated the way in which the Zionist commitment to ethnic “statism” undermined the moral fiber that should be at the base of any Zionism that would productively refashion Jewish identity in the modern world. On the repatriation of Arab refugees in 1948, Rawidowicz is quite explicit: “To summarize: There should not be a single refugee from the State of Israel in the world. The Arab refugees should return to their homes, and your state shall be pure, O Israel.”

Myers suggests that Rawidowicz chose to bury this essay in fear that it would detract from the larger thesis of “Bavel ve Yerushalayim,” which is a frontal attack on Ahad ha-Am’s notion of Israel as a “spiritual center” for Diaspora Jewry. Rawidowicz believed that his major contribution would be to “correct” Ahad ha-Am’s vision of Israel as a “spiritual center” by arguing that there were two traditional centers (Bavel *and Yerushalayim*) and, with the emergence of the state, there will again be two centers: Israel and the Diaspora, each feeding the other and benefiting from the other’s vantage point and cultural resources.

His attack against “negation of the Diaspora” Zionist ideology was unrelenting, arguing that “the solution to the Jewish question is not to be found in one country, not even in Palestine.” While Rawidowicz’s positions are reflected in, and reflective of, other thinkers, such as S. Yizhar, Aryeh Tartakower, Ya’akov Fleisher and Yizhak Epstein (names virtually unknown in the United States, albeit better known in Israel), only Rawidowicz formulated his views as a Diaspora Jew, committed to the Diaspora as a Jewish center of creativity and contributor to national rebirth.

He understood that the State of Israel “raised more problems for us Jews than it has solved,” and that the double standard endemic in Israel’s self-fashioning undermined the moral high ground Jews had occupied throughout history. He writes: “When [the Arabs] commit an outrage, it cries out to heaven. But when we commit such an act with our own hand, it is an imperative that could not have been avoided.” Such behavior, he claimed, was not only immoral but “for the first time in two millennia [gave] the haters of Israel… grounds to complain about the behavior of the Jews.”

Myers’s lengthy introductory chapters not only set Rawidowicz in his historical context, but also offer insightful and provocative analyses of the whole period in question, stressing the tumultuous ideological wars surrounding “the Arab Question” in the early years of the state. These chapters alone should be required reading for anyone who wants (or dares) to separate reality from myth in this confusing time, both his and ours.

This book is important not only because it gives voice to a Jewish scholar steeped in tradition whose jeremiad against Israel and “statist” Zionism was unheard; it is arresting because one can perhaps too easily draw a line connecting Rawidowicz’s critique and his fears in the early 1950s to the reality of the conflict in 2009. That is, from reading Rawidowicz, and Myers’s excellent assessment of him, one can surmise that the moral crisis in Israel is not the result of the war in 1967 or the intifadas in 1987 and 2000. Instead, the crisis begins in 1948, with Israel refusing to offer protection to the Arab refugees, most of whom were innocent victims of a bloody war, and then making it unreasonably difficult for those who remained to acquire citizenship in a new Jewish state that was envisioned by its architects as a model for tolerance.

True, today an open-door policy of repatriating Arab refugees and their families might threaten the “Jewish” character of the state (which Rawidowicz wanted to protect). But in 1948 that was not the case, and many at that time knew it. And now, when historians such as Benny Morris have provided evidence to undermine the Israeli myth that Arabs left Palestine primarily on the advice of their leaders (Rawidowicz and others knew this myth was untrue in the early 1950s), we Jews have much to account for.

In his epilogue, Myers gives us various reasons to read Rawidowicz today. I would like to add a few of my own. When we have in our affluent and tolerant Diaspora (where Jews are arguably treated better than at any time in historical memory) an eminent scholar from Harvard like Ruth Wisse, who writes in her book “Jews and Power” that the problem with Israel and the Jews today is that they are not militant enough, and when Martin Peretz, editor of The New Republic, proclaims that the message of Israel’s 2009 attacks in Gaza is “Don’t f–k with the Jews!” we need to seriously rethink where we have come as a people. And when Avigdor Lieberman and his quasi-fascist Yisrael Beiteinu party wins 15 seats in the Knesset and the centrist parties reject even symbolic repatriation and ignore the issue of civil rights in Israel, we should wonder if Rawidowicz’s fears in 1951 have come to pass. Survival is a wonderful thing, but selling one’s soul is a tragedy. We owe David Myers a debt of gratitude for giving us Simon Rawidowicz’s lost voice: a voice of reason, of tradition, of morality, especially at a time when we need to be brought back to our collective senses.

Shaul Magid is the Jay and Jeannie Schottenstein professor of Jewish studies and professor of religious studies at Indiana University in Bloomington.