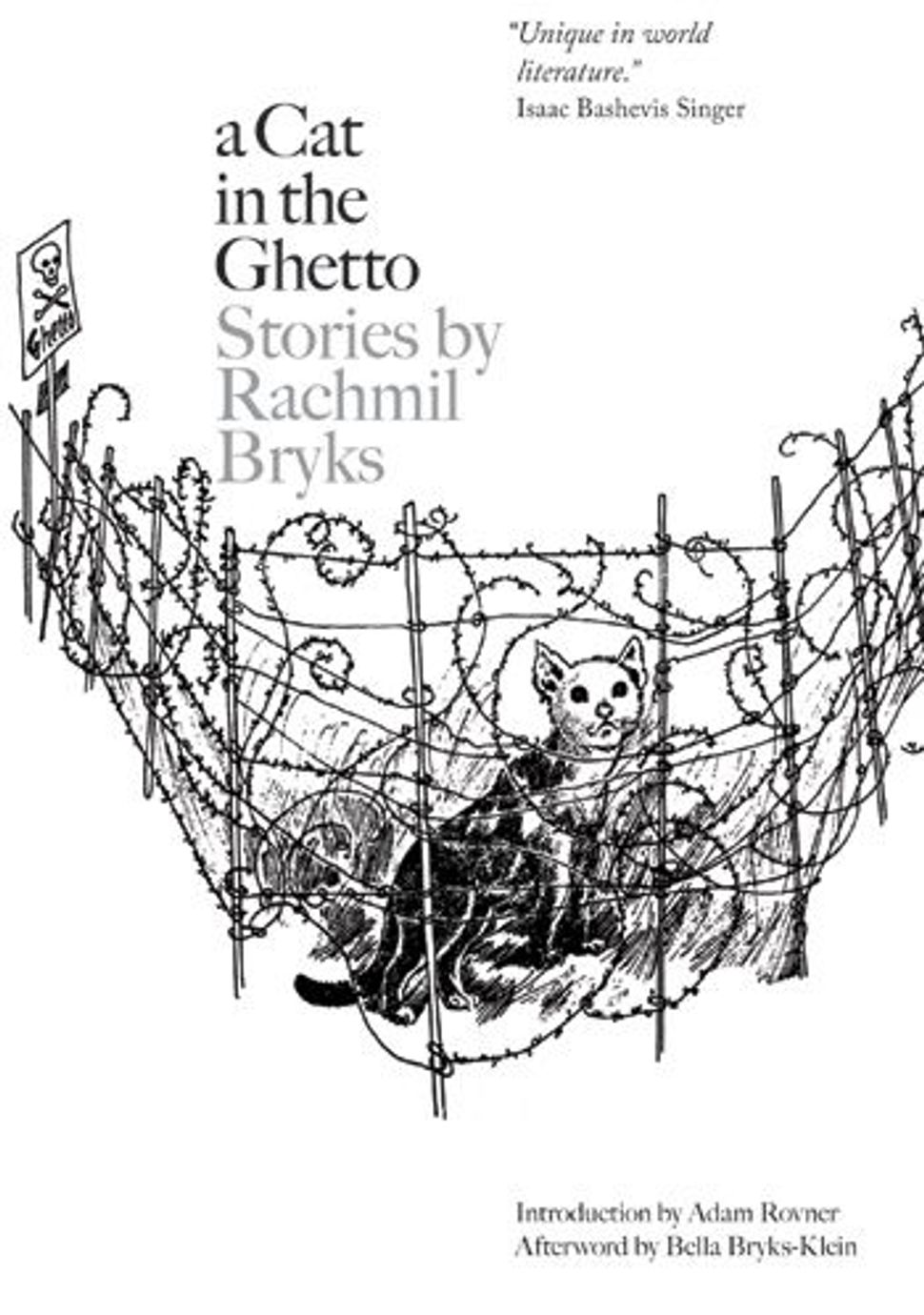 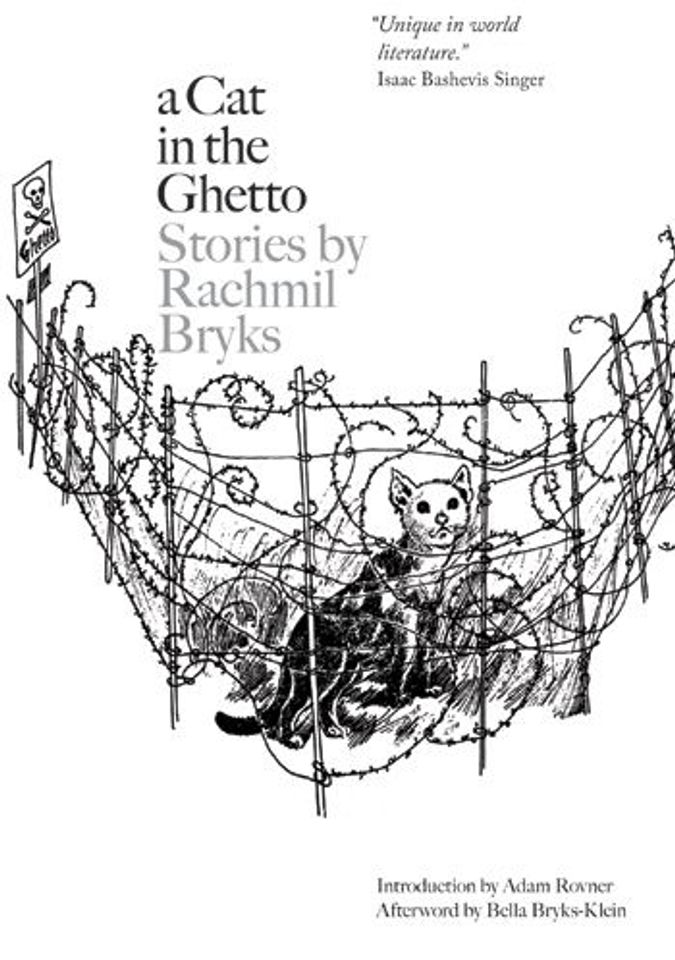 Between his 1939 book of Yiddish poetry, “Yung Grin Mai” (“Young Green May”) and his caustic novella, “A Cat in the Ghetto,” lay the Holocaust: Skaryýsko-Kamienna, where Rachmil Bryks was born in 1912; Lodz, to which he was deported; Auschwitz, which he survived, and, ultimately, New York — where he died in 1974, though later interred in Jerusalem.

“A Cat in the Ghetto,” recently republished by Persea Books, first appeared in 1952 under the more unnerving title “Oyf Kidesh Hashem,” meaning, “In Sanctification of the Name,” but expressing, also, the pious euphemism for martyrdom.

Like fellow survivor Yehiel De-Nur, who, writing under his camp name and number Ka-tzetnik 135633, called the gas chambers the “inner sanctum of the Temple of Auschwitz,” Bryks displays and proclaims like a 20th-century prophet. In his novellas, the tattooing needle of Auschwitz trails a thread tied, at one end, to the Book of Lamentations, which sanctified the destruction of a Jewish way of life in mourning the loss of a symbolic Temple, thereafter endlessly transformed.

All at once a wailing shriek crashes out:
“Water ! ! !
Man — water ! ! !”
Necks suddenly beget heads —heads with eyes; heads with
mouths. Head wheels around to head. Eyes transfix eyes.
Mouths fall open in unison:
“Water ! ! !”
“Water ! ! !”
“Water ! ! !” Ka-tzetnik wrote this description of the gas chambers in “Star Eternal,” originally “Star of Ashes.” (De-Nur, his adopted name for the person who ceased to exist after Auschwitz, means “from the fire” in Aramaic.) But Bryks, an adamant anti-modernist, would not put language through the fire, too.

Like fellow poet Charles Reznikoff, Bryks took the litany of Lamentations as inspiration for the secular litany of his ghetto experience between 1939 and 1944. (Compared with the ghetto years, Auschwitz occupies a brief place in his collected works, which also include a novel, “The Paper Crown,” and stories from the beginning of the war.) But whereas younger writers like these sacrificed everything to render literature true to experience, Bryks, writing in a very native Yiddish, clung fast to his roots in the Book of Prophets, Sholom Aleichem, the midrash, the folktale and the megillot.

Bryks, who in photographs resembles a Polish vaudevillian, considered himself a survivor of neither the Holocaust nor the Shoah, but rather as one passed over by the “Khurbn,” which came only for the Yidn. In his essay “My Credo,” he wrote, “I want to emphasize that our Khurbn period includes also the spiritual khurbn in the Soviet Union during the Stalin era — the destruction of the Jewish word, the slaughter of Yiddish writers, actors, artists, teachers and others engaged in the field of Yiddish culture.” According to his daughters, the mamaloshn was the only tongue tolerated in their home on New York City’s Upper West Side, where, in contrast to the tortured linguistic contortions of German-language poet Paul Celan in Paris, Bryks wrote steadily at the kitchen table by day and met Isaac Bashevis Singer, Itzik Manger and Avrum Reisen for tea at the Garden Cafeteria.

For him, tragedy was a means of continuation, not the sign of a permanent rupture with the history of the people Israel, and not merely a metaphor, either. Writing in the secular, defensive, abusive and absurd language of the European Diaspora, he was guilty of profaning the purity of neither the German nor the Hebrew language, while advancing neither prosody nor prose. Instead, like Tadeusz Borowski — that other Polish ironist of the camps — Bryks drew pathos from bleakest anecdote and blackest humor: “The warehouses of the ghetto of Lodz were overrun by mice wreaking havoc with the food supplies stored there,” he wrote in “A Cat in the Ghetto.” “To plant poison in the warehouses was out of the question because once the mice got hold of it, it could turn up anyplace — consequently there arose an urgent need for cats. But, alas, there were no cats in the ghetto”: The cats had all run away “of their own accord” — not because the Nazis confiscated all domestic animals, but “because of the appalling hunger” among the Jews, who raised cabbage instead of children in baby strollers abandoned by the deportees.

“Besides, people ate cats….” And so the obituary begins. But it would be less humorous, and less tragic, if this prologue did not also serve as an appropriate introduction to the author, who makes us, as readers, complicit in mocking the “calflike” enthusiasm of the ghetto faithful and their endless machinations.

Indeed, it would seem as if Bryks’s hatred of the aesthetically superfluous were related to his experience with human superfluity during the war, though his love of Yiddish appears, even now, to contain the whole of his hope in humanity. The vey-iz-mir sarcasm of his work notwithstanding, Bryks was clearly moved more by the self-sacrifice of Jews on behalf of other Jews than by martyrdom of the purely abstract kind. His book “Di Vos Zaynen Nisht Gibliben,” or “Those Who Did Not Survive,” is an understandably respectful homage, considering Bryks was still a young man when the dying handed him their last crusts of bread in the hope that he might survive and remember their stories. And as every story has its lesson, so there is something to learn from every experience of What Happened.

For Bryks, who believed that Jewish writing in any language must instruct and record with mussar (ethics) and not art, as its goal, a wry piece of advice to posterity would serve just as well: “And they dipped the unpeeled potatoes in salt and ate,” he wrote of Mr. and Mrs. Zeif in the fable, “A Cupboard in the Ghetto.” “Because the ghetto Jews said: The peel is healthy. In the peel there is iron and under it there is sugar, and that’s why cattle are so healthy and strong — because they eat the peel.”