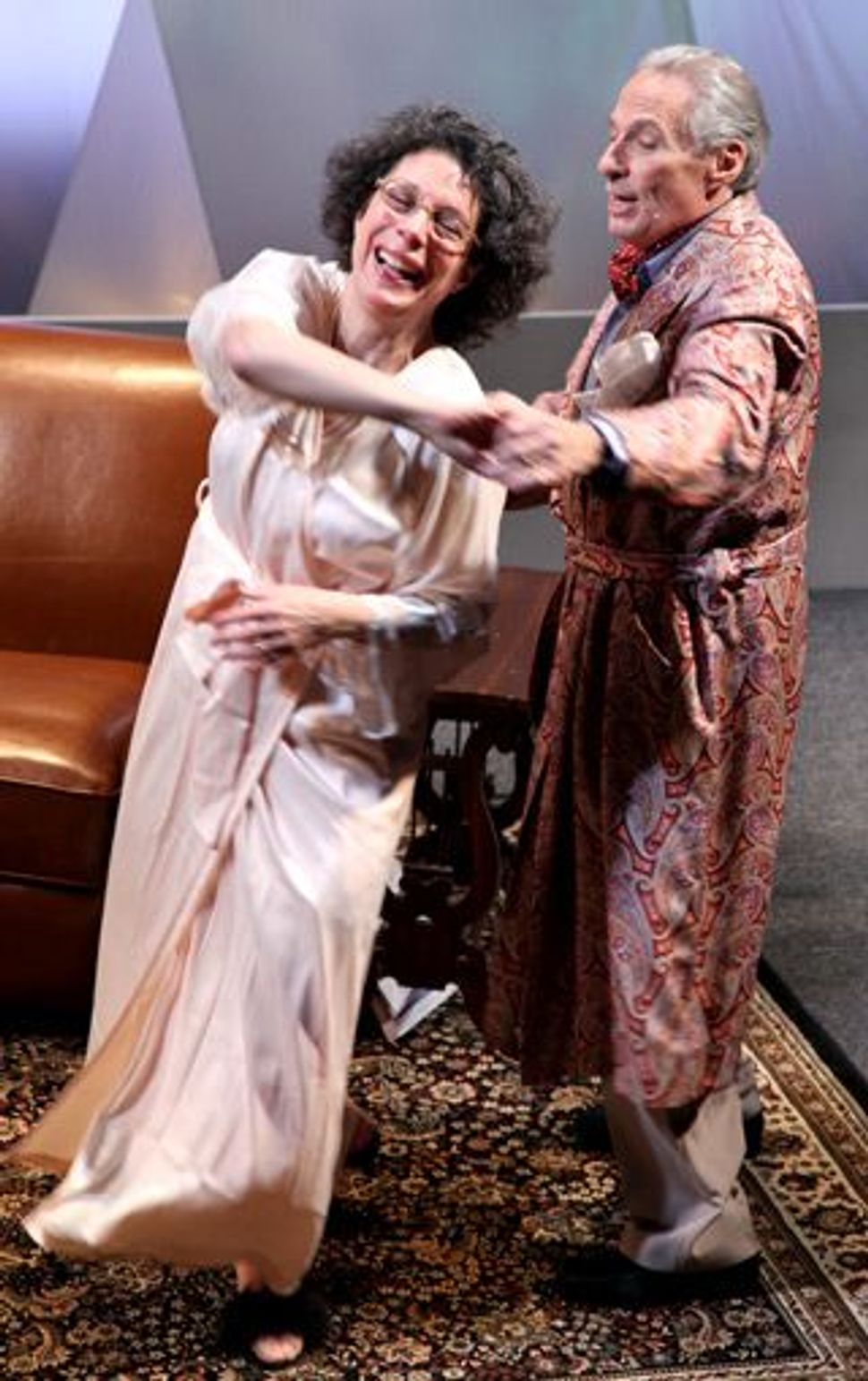 Dance With Me: Suzanne Toren with Itzy Firestone in ?The Man Who Couldn?t Stop Crying,? one of three short plays by Murray Schisgal that make up ?Shpiel! Shpiel! Shpiel!? Image by Michael Priest Photography

Murray Schisgal was one of the first and most celebrated “black comedy” playwrights of the 1960s and ’70s. He (and other men, largely Jewish and first-generation American) wrote tough, elegant — and, for the day, satirical — comedies about sexual and other struggles in a vibrant, decaying New York. His 1964 play, “Luv,” in which Alan Arkin, Eli Wallach and Anne Jackson formed a neurotic love triangle, was a Broadway hit and a Tony nominee for best play. In his 1993 New York Times review of “In Persons,” an evening starring Wallach and Jackson, Frank Rich said “Luv” was “one of the funniest [plays] ever seen on Broadway” and asked, “[I]s it too much to hope that a new Schisgal comedy might be waiting for them in the wings?” 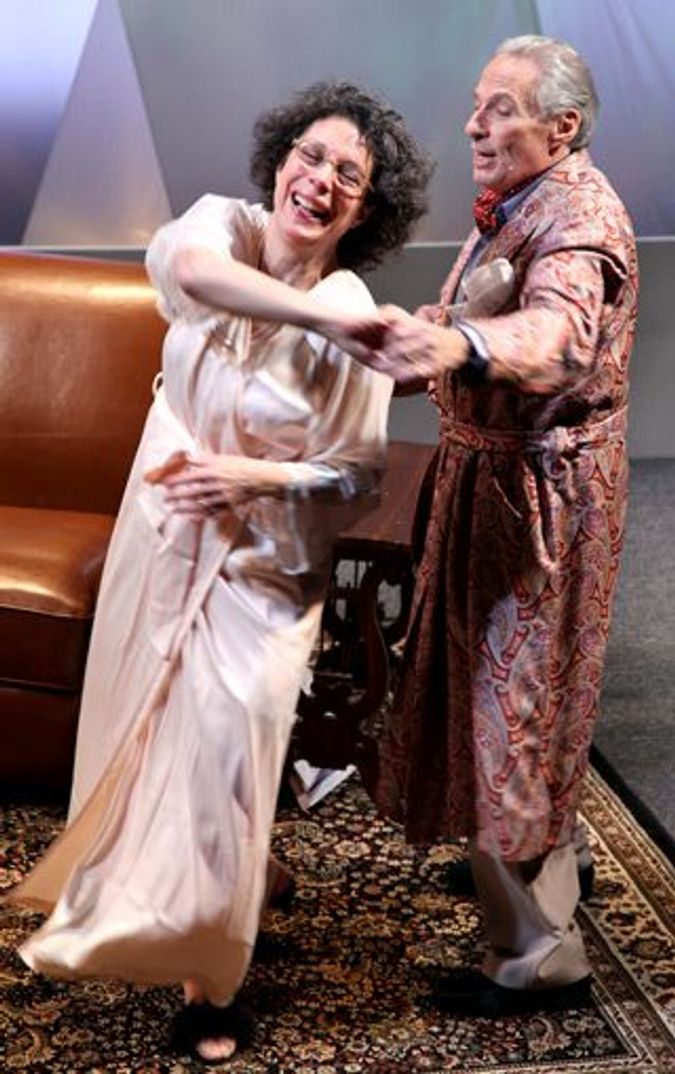 Dance With Me: Suzanne Toren with Itzy Firestone in ?The Man Who Couldn?t Stop Crying,? one of three short plays by Murray Schisgal that make up ?Shpiel! Shpiel! Shpiel!? Image by Michael Priest Photography

Apparently it was. Even though Schisgal continues to write, Manhattan hasn’t seen any major revivals of his plays in recent years, let alone productions of new works. So it’s of interest that three Schisgal one-acts— one billed as a world premiere — are now being presented, in Yiddish, at the National Yiddish Theatre — Folksbiene, under the title “Shpiel! Shpiel! Shpiel!”

A shpiel, today a persuasive sales-type pitch, was originally a play performed at Purim. These three shpiels run through the holiday’s month, although after Purim itself.

While initially disconcerting, the idea of doing such translations turns out to be a good one. Hearing Schisgal’s distinctly American Jewish voice in the language of the old country gives the plays an affecting fablelike quality; the first two productions even have the feel of classic tales handed down over generations. Plus, reading the original English in supertitles (placed too high for ideal comprehension) shows that after 40 years, Schisgal’s scripts still successfully mix courtly formality with comic yearning and rancor.

In the curtain raiser, “The Pushcart Peddlers,” directed (with a heavier hand than necessary) by Motl Didner, two fresh off-the-boat immigrants engage in a one-day microcosm of an entire mercantile lifetime. Cornelius (Stuart Marshall), an old hand by virtue of being in the country for a day, deludes, persuades and barters with the more innocent Shimmel (a charming Michael L. Harris); the two, along with a supposedly blind flower seller (Dani Marcus), trade sob stories, flattery and financial pressure to try to climb the ladder, from peddler to theater producer, ringing clever changes on these exchanges that sound even funnier in expressive, shvitzy Yiddish.

In the second play, “The Man Who Couldn’t Stop Crying,” smoothly directed by Broadway veteran Gene Saks, Schisgal again displays his gift for creating niggling, circuitous dialogue. As the title makes clear, a wealthy businessman (the hilarious I.W. “Itzy” Firestone) constantly chokes up, whimpers and blubs, to the dismay of his loving but long-suffering wife (Suzanne Toren): Everything from happy family memories to the work of Jerry Lewis is twisted into the tragic, the embittering or the touching. While the play itself cries out for more incidents and a better ending, it cleverly portrays the different kinds of unhappiness that can be found in life if one really looks for them.

The last piece, “74 Georgia Avenue,” directed by gifted comic actor Bob Dishy (himself a prime Schisgal interpreter), is the most serious and most flawed, both as a play and as a production. (It’s performed largely in English, with only a late lapse into Yiddish.) A troubled businessman (Harry Peerce) returns to the Brooklyn apartment of his youth to propel himself into his past. The new tenant (Tony Perry), a black man with a dying wife, is the son of the janitor who worked in the neighborhood’s synagogue. Putting on long-gone local Jews’ clothes, which came from his father’s place of employment, he begins to channel these dead in what seems at first a “possession” but is actually an empathic connection that allows both men to accept the pain of death and the guilt of the past.

By Folksbiene’s own admission, this play on Sunday, March 15th, was unready for an audience (a problem at $45 a ticket), but the fact that one actor still carried a script wasn’t the only reason. The play’s shift from being a spooky, ambiguous drama into one obviously about reconciliation was disappointing, and its brutal length — almost an hour — vitiated the appeal of its being a one-act. Still, acting and singing in both English and Yiddish, Perry showed impressive range.

The pieces were skillfully bridged by musical interludes, well sung by Lisa Fishman, including a Yiddish rendition of “What a Wonderful World” (translated, as were the plays, by Moishe Rosenfeld). Russel Phillip Drapkin’s eloquent lighting design created a starry sky effect that ended the evening with a taste of the eternal, and costume designer Gail Cooper-Hecht gave the lachrymose lead of the middle play the funny look of a timeless tycoon.

“Shpiel! Shpiel! Shpiel!” won’t be everyone’s glezl tey (glass of tea); for young audiences, Schisgal’s wise and harshly urban straight male voice may now seem more archaic than even Yiddish. Yet for those who appreciate his amusingly discordant tone, hearing it again (in more than one language) may be a welcome relief from a theater culture that, since the ’60s, has grown more generic, suburban and sentimental. Maybe Folksbiene’s experiment — overlong, under-rehearsed, but ultimately worthwhile — will even inspire other theaters to do more Schisgal.

Laurence Klavan is a playwright and novelist living in New York City.