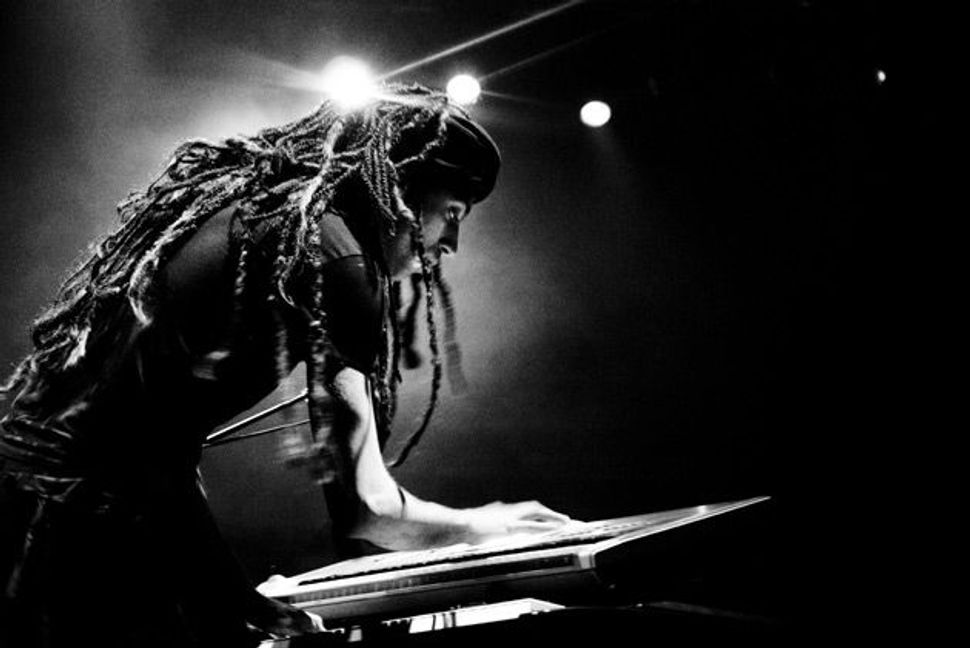 Triple Platinum: The fabulously successful Idan Raichel Project is a musical collaboration of more than 90 artists of different cultures from all over Israel and the world. Image by Nitzan Treystman

When I ask Idan Raichel, leader of the triple-platinum musical phenomenon The Idan Raichel Project, where he sees himself 10 years from now, he doesn’t divulge plans for future world (musical) domination. He doesn’t talk about how it’s entirely possible that by that point, he’ll have reached the level of international renown of a Paul Simon or Peter Gabriel — other singer-songwriter-producers who, in innovative ways, have brought the music of diverse world cultures into the metaphoric and literal spotlight.

Instead, he just laughs.

“When you live in Israel, and grow up in Israel, you don’t think more than two days ahead of yourself,” he says by telephone from Tel Aviv. “Welcome to the Middle East! Ten years… are you kidding me?”

Admittedly, it’s an unfair question to ask someone who just seven years ago was an unknown, recording his first album in his parents’ basement in Kfar Saba. The idea that Raichel would become a de facto ambassador of Ethiopian music to Israel seems somewhat incongruous. The fact that he’s taken that role one step further to become an ambassador of Israeli music to the world, in contrast, seems comparatively logical.

The Idan Raichel Project is a musical collaboration of more than 90 artists of different cultures from all over Israel and the world. While Raichel writes, arranges and produces the music, the Project deliberately has no frontman. At concerts, around 10 of the group’s musicians and singers perform in a semicircle, with each member’s talents showcased at different points.

The Project’s phenomenal success in Israel was initially surprising to Raichel; the group’s musical sound diverged radically from then-typical Israeli pop. Its first album, in 2002, introduced Ethiopian-inflected music into the Israeli musical mainstream.

After first hearing Ethiopian music during his army service, Raichel was exposed to more Amharic-language pop when he worked as a counselor at a boarding school in Israel for immigrants and troubled youth. He worked with teenagers who had emigrated from Eastern African tribal communities. “It was my first time really seeing how immigrants try to manage with all their identity problems,” he recounts. “Parents who don’t speak the language, youngsters who need to support their families… they came to Israel and had to deal with this half-Middle Eastern, half-Westernized country. It was very interesting to see how important it is for those immigrants to keep their own roots, but still define themselves as Israeli. That is still the biggest challenge for any immigrant coming to Israel.”

“The music was very beautiful, and it was very weird to me that none of the Ethiopian pop music was being exposed to the big world… It was strange that these voices hadn’t been heard before, especially in Israel, where we have a huge community of Ethiopians.” And hence the Project — an attempt to synthesize perspectives on music and Israeli identity — was born. The Project’s trip to perform in Addis Ababa, and the questions of Israeli and Ethiopian identity the trip raised, was documented in Tomer Heymann’s film “Black Over White.”

“I’m very happy that the Project has become a platform to expose general audiences to minorities in Israel,” Raichel says, but he notes that the group’s music is meant to be an initial gateway to cultural literacy. “I don’t think you can listen to the music of the Project and say, ‘Oh, now I know much more about Ethiopian culture.’ But you can say, ‘I love this.’ You can’t listen to the music of the Project and say, ‘Now I know all about Israel,’ but you can say, ‘This is one aspect of Israel that it’s interesting to explore, in addition to the Israeli-Palestinian conflict.’

“I think I’m doing my own music, but I’m happy that there are some side effects: the chance to expose the music of minorities to Israeli audiences, and Israeli music to worldwide audiences.”

The group’s latest album, the just-released “Within My Walls,” has gone even further afield. Its music is beautiful, haunting and internationally kaleidoscopic, with participants from Colombia and Cape Verde. Songs are performed in Hebrew, Arabic, Spanish, Swahili and Cape Verdean Creole. More than ever, the Project’s music has a “world” music feel, but Raichel wants to make it clear that the Project is ultimately Israeli, with the implicit message that Israeli society is the sum of its disparate and Diasporan parts.

“I have to admit that my job was only to keep my ears and eyes open, and to travel a lot in Israel to find people who found themselves in Israel, but kept their own roots,” Raichel says. “We are doing Israeli music. Outside of Israel, they might say that we are doing ‘world music,’ but for us, it’s totally and completely Israeli music.”

Audibly thrilled, Raichel recounts his joy at the Project having been selected as one of the top world music acts of 2008 by The New York Times.

“The last line of that review said that this is great music from Israel, and it’s Israeli music,” he says. “This was the most important accomplishment, that people would define this music as Israeli. For me, it’s a great honor, because I feel very Israeli.”

The main goal of the Project, and the main challenge, is to bring Israeli society and reality to the world,” Raichel says. “More than just to do our music, we feel sometimes like Israeli ambassadors for cultural affairs — that we have to show other aspects from the Israeli reality, other than the Israeli-Palestinian conflict.

“While Raichel’s music bears explicit and implicit messages of love, Raichel is perhaps a bit more realpolitik than his dreadlocks suggest. He defends Israel’s recent Gazan incursion: “Israel had to protect cities in southern Israel from being bombed — and they’d been bombed not for eight hours, and not eight days, and not eight months, but eight years. For eight years, Hamas was bombing five cities in Israel. I think that the Palestinian people are victims of the Hamas organization.”

Internationally, Raichel says, many people only know Israel within the context of its conflicts: “South Korea and North Korea are both much more than the conflict between them. Back in the days of the IRA bombing London, there was much more to learn about the United Kingdom and Northern Ireland than the conflict.”

“In these days, until peace will come soon, hopefully, we have to show the beauty of Israel and the other sides of Israel. We also have to learn about our enemies and to respect them: We don’t need to love them and they don’t need to love us. We need to learn about their reality, respect them and to teach them about our reality. One day we can live if not as lovers, at least as neighbors.”