Back to Orthodox Judaism by Way of the Dalai Lama 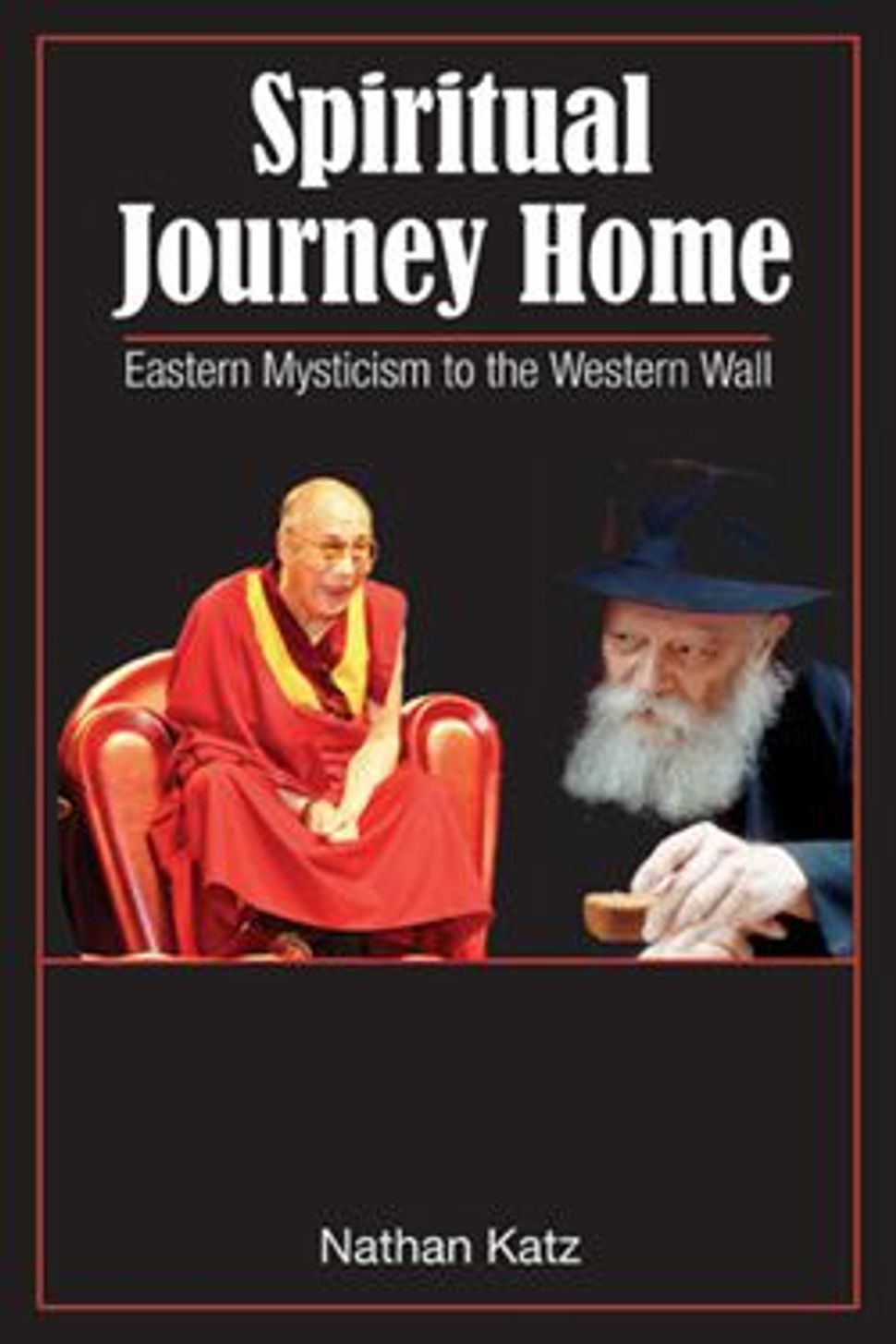 Nathan Katz’s autobiography, “Spiritual Journey Home,” is at once personal and paradigmatic. Coming from a traditional Jewish background, Katz was propelled by the 1960s into an Eastward-bound spiritual quest. Not content with a mere adolescent pursuit, Katz made the study of Eastern religion his profession.

Unlike many JuBus (Jewish Buddhists), though, he found his way back to Judaism, partly through the Eastern insights he’d gained. “Meditation is meditation,” he wrote. The Shema said silently is a mantra; Jews and Sufis even use the same word for a meditational object — dekhir *in Yiddish, similar to the Sufi *dikhr. Katz and his wife, Ellen Goldberg, now lead an Orthodox life in Miami Beach. Buddhist wise men, Katz wrote, often counseled Jewish seekers to seek their spiritual enlightenment within the bounds of their ancestral religion. 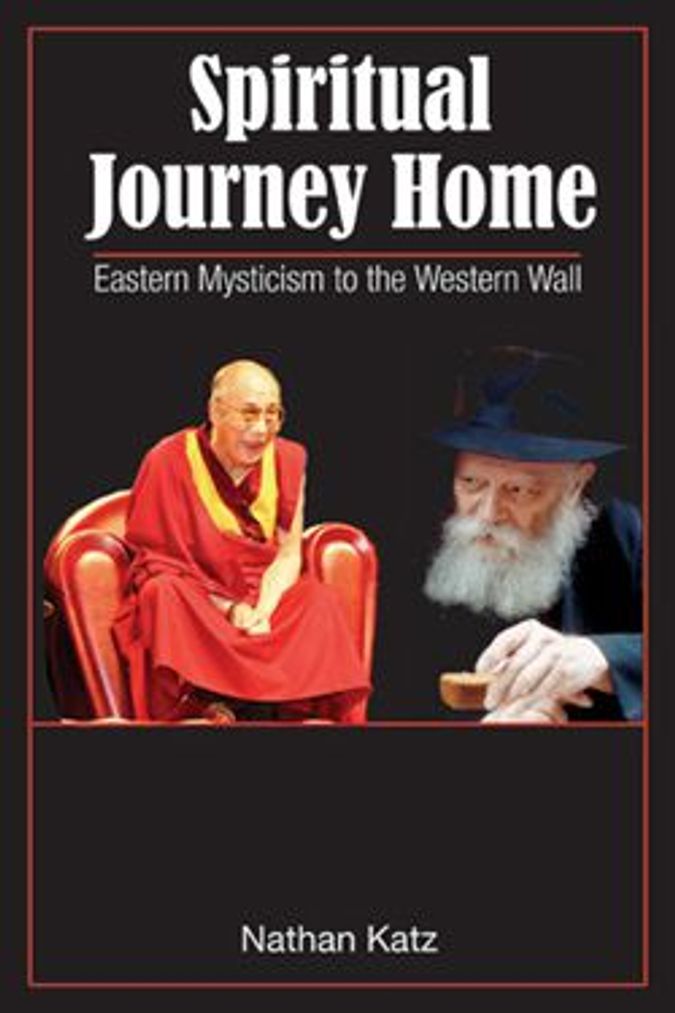 Unlike many Orthodox Jews, Katz does not reject lessons learned elsewhere. He has spent his life building religious bridges, and here he doesn’t burn any. Few would number the Lubavitcher rebbe, the Dalai Lama, Elie Wiesel, Timothy Leary and Allen Ginsberg all among their friends and contacts, but this unusual mix, plus such alternative Orthodox figures as Blu and Yitz Greenberg, Shlomo Carlebach and Zalman Schachter-Shalomi, all affected Katz’s personal journey as well as Judaism’s ongoing revitalization.

If this book were primarily spiritual, I might not have enjoyed it; I’m an unspiritual kind of guy. But Katz’s journey says at least as much about being inside his times as about being inside his head. And he excels at explaining abstractions concretely. He finds comparisons between Judaism and Eastern religions few others could make, and lays out some of the varieties and mysteries of the latter succinctly. It’s a fast read; his style is quick and self-deprecating, but that notwithstanding, he has led an interesting life, one very much entwined in its times.

Katz grew up when Camden, N.J., still had the Jewish neighborhoods of bygone times, with synagogues and shops owned by his relatives — including an uncle’s kosher butcher shop and his father’s sign repair shop — all in close proximity. Jewish relatives and neighbors offered advice, guidance and ever-watchful eyes. Spiritual as a child, Katz felt ecstasy praying at Conservative Sabbath services. But such feelings had dissipated by the time he was bar mitzvahed. What he sought later in life was a return to both the spiritual warmth and the community he lost when Camden’s Jews moved to the suburbs.

Katz headed for Temple University in nearby Philadelphia, where the 1960s were in full swing. He absorbed his generation’s radical attitudes, writing:

“Today, I see my 60s self as simultaneously idealistic and narcissistic, right about some things but convenient and self-justifying… How all too easy it was to avoid not only military service, but anything that imposed limits on our excesses, and to feel virtuous all the while.”

One summer, during college, some of his friends rented a house in the world’s hippies-transcendence-and-hash capital, Kathmandu, and urged him to join them. Katz went through culture shock upon arrival in Asia, overwhelmed by the beggars, the filth, the unfamiliar food and the heat.

He awoke one night to see an old beggar woman standing at his bedside; she proved to be an apparition. Freaked out, but wanting some answers, he decided to head home, where he began studying Jungian psychology, Tibetan Buddhism, Sufism and Zen in what he terms “the Sixties Spiritual Salad Bar.”

Katz trekked across the Middle East in 1970, after graduation. He ended up in Afghanistan, where he taught English, including a special class for Kabul University’s Islamic law faculty, and in Sikkim, where he met the Dalai Lama and determined to pursue graduate studies in religion.

Up to this point, Katz did not have an extraordinary trip. He was one of countless alienated young Jews pursuing Eastern religions and radical politics. He studied with various gurus and made several profound study trips to India and Sri Lanka. After completing his doctorate at Temple in 1978, he taught at the Naropa Institute, a Buddhist college in Boulder, Colo. (it hardly gets more groovy than that), then made an important step up the career ladder (as well as closer to Goldberg, whom he’d met earlier) by joining the faculty of Williams College. Katz specialized in Eastern religions, but a dean tapped him to teach a course on modern Jewish thought. “Katz is a Jewish name,” the dean said.

Katz was less troubled by the dean’s old-line attitudes — teaching the course reignited his interest in Judaism — than he was by the new politically correct anti-Zionism, one star in a constellation of thought, fashionable on campus, that included deconstruction and lesbian feminism. Katz’s feelings for Israel were still left-wing ambivalent, but he was shocked by the hate he saw when he was the only Jew on a public panel discussion about Israel’s 1982 Lebanon incursion. He writes:

“They made outrageous anti-Israel claims, to cheers from the students. I can honestly say that never in my life have I felt so utterly alone as I did at that moment. I was distraught. When it was my turn to speak, I was compelled to charge my interlocutors with anti-Semitism. What else could account for the packed, hostile auditorium? Why did they reserve such vehement protests for Israel?”

He also began to moderate politically, feeling shame when spotted by a college trustee as he carried a sign at a demonstration, or when realizing he was haranguing visiting parents about gender relations.

Katz had wanted to leave Williams, where he and Goldberg had married, but he didn’t find the University of South Florida much better. It became known as “Jihad U,” where professors built a front for terrorist fundraising. One professor even left later to lead Palestinian Islamic Jihad. Katz was quick to warn the administration of his suspicions — large amounts of money offered with murky provenance, radical figures speaking on campus and so on — but to no avail. He says he became increasingly uncomfortable at the university, as he was teaching Islam to an increasingly Arab student body. One of his students was the wife of a professor later convicted on terror-related charges.

Meanwhile, Katz and his wife wanted a deeper Jewish life, and he a more congenial academic environment. They both found what they wanted in Miami, where Katz now teaches at Florida International University. Finally in a physical and spiritual place of contentment, Katz can recount his journey and, throughout the book, he digresses to explain how he was helped along steps in his path by a guru here or a rabbi there.

On one occasion, Katz recounts some of the magic he finds in Orthodox observance. He and Goldberg were undergoing lengthy fertility treatments when suddenly, one day, she was diagnosed with ovarian cancer and taken immediately into surgery. Overwhelmed, Katz went to a friend’s house to seek solace. Suddenly, a young Chabad rabbi came by. “He instructed me to recite certain psalms while he went to the telephone to call the Lubavitcher Rebbe,” Katz wrote.

Katz took comfort in the ritual. The Chabad rabbi, meanwhile, got through to the rebbe’s personal secretary, who happened to be in the same room with the rebbe. “The rebbe immediately began davenen for my wife,” Katz wrote. “After a short time, he told his secretary to assure me that Ellen would be all right. And she was.”

There are lessons to be learned. Got a JuBu in the family? You might understand how serious he or she is about JuBus’ beliefs. The Dalai Lama advises Jewish leaders: Don’t discourage those seeking esoterica and mysticism quite so thoroughly as Judaism has. Some people want it and need it, and will stay in Judaism if they get it here.

JuBus themselves might learn from Nathan Katz, who went further afield than most of them have and yet returned to Judaism: He opened his heart and did not close his mind to it; he found magic in it, and he realized that something 4,000 years old surely has a few lessons to teach — even to today’s alienated seeker.

Daniel Berger is a writer living in Atlanta. He has reported and reviewed books for The Tampa Tribune.

Back to Orthodox Judaism by Way of the Dalai Lama