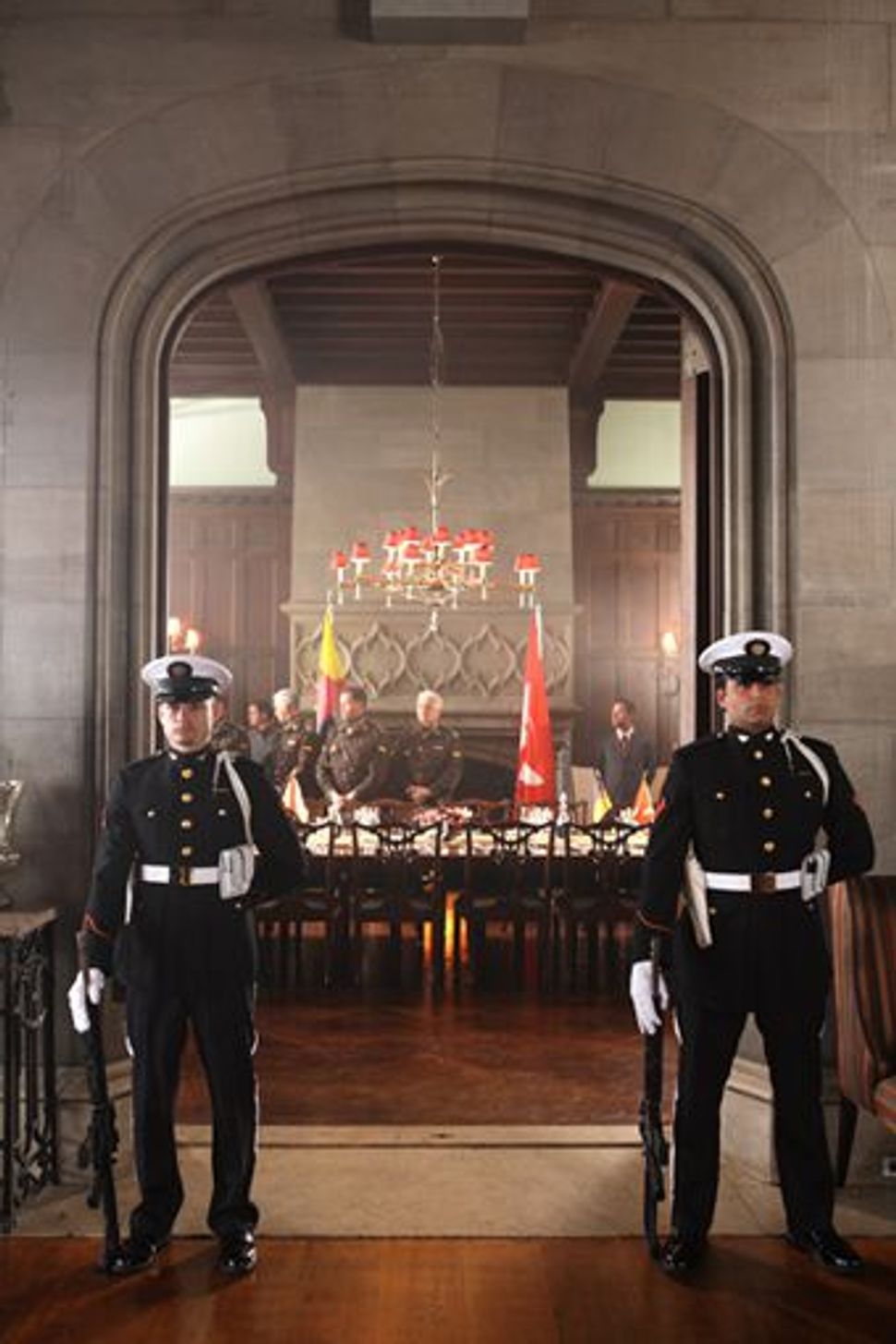 From the Good book to a Mostly Good TV show: Gath comes to Gilboa to meet for peace talks. Gilboan settings resemble the Althorp, the New York Public Library and the Brooklyn Museum. Image by COURTESY NBC

When you consider all the genealogies, digressions and picayune laws cluttering the pages of the Hebrew Bible, it’s no wonder that secular types are reluctant to read it. (The same probably goes for some religious types, although they may be less inclined to admit it.) Nevertheless, like Proust or exercise, the Bible rewards the diligent. For sheer poetry, there’s no beating the jeremiads of Jeremiah or the sensuous Song of Songs; and offhand, I can think of a dozen startling moments — like Abraham haggling with God over Sodom, or Moses protesting his slowness of speech — that humanize the Bible’s distant figures, allowing us to see them both as patriarchs and as people. 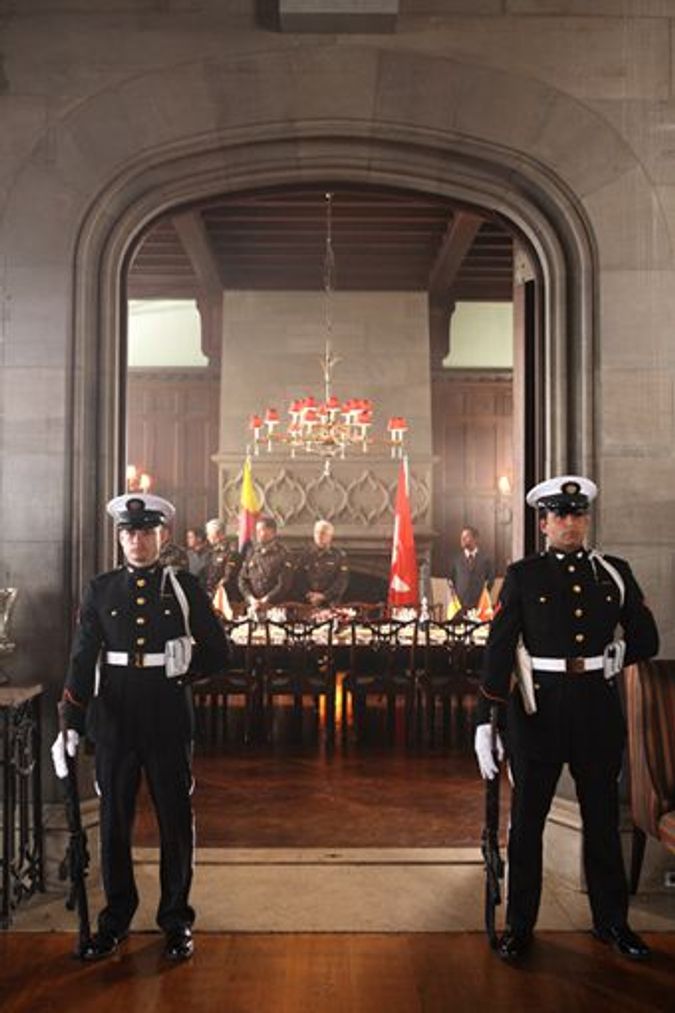 From the Good book to a Mostly Good TV show: Gath comes to Gilboa to meet for peace talks. Gilboan settings resemble the Althorp, the New York Public Library and the Brooklyn Museum. Image by COURTESY NBC

And who makes for more vivid reading than David, the shepherd, bandit, soldier, lover, poet and king? Whose story is simultaneously so varied and complete? Indeed, there is something so vibrant and protean about him that, as Robert Pinsky notes in his excellent book “The Life of David” (Schocken, 2005), we are alternately reminded of Hamlet or Lear or Odysseus. King David is not just an object of religious study; he is also one of the great characters of Western literature. If this seems too fancy, I will add that the David story has its portion of sex and violence — especially violence: There’s a ton of gut-spilling and groin-smiting, with severed heads passed around like Hanukkah gifts.

With all this packed into one biography (or historical fiction, depending upon your beliefs), it’s not surprising that “Kings,” the serial drama that premiered on March 15 on NBC, is adapted from it. In fact, the show is one of those simple-but-great ideas that make you wonder why this is the first time someone thought of it. Of course, this is not the first time that aspects of David’s life have been interpreted: Israel’s second king has inspired artists for millennia. In third- and sixth-century mosaics, he plucks at harp strings, emphasizing his psalmody. In stained glass and tapestry, he appears in the Tree of Jesse, a visual metaphor of Jesus’ lineage that references messianic prophecy. In illuminated manuscripts, he points toward his own mouth, an allusion to Psalm 39, wherein he promises to “sin not with my tongue.” (Clearly, medieval illuminators skipped the parts about Bathsheba.)

The Renaissance allowed for more complex conceptions of David, with musicianship and sex and even his capacity for betrayal and violence. Michelangelo (obviously) sculpted him as gorgeously muscled; Donatello envisioned him as more sinuous. Rembrandt mined his story for its ambiguities, envisioning a sort-of-sad David embracing a shattered Jonathan, or a pensive nude of Bathsheba. More recently, the complicated king has popped up in popular culture. Leonard Cohen uses Davidic imagery in his soporific “Hallelujah”; Bob Dylan does the same, to better effect, in “Jokerman.” Two film versions are notable in only tonsorial terms: Compare the pomaded Gregory Peck in “David and Bathsheba” (1951) to Richard Gere coiffed in a Jewfro in “King David” (1985). It seems that in literature, the David story has fared best: In “Goliath,” playwright Karen Hartman demonstrates that in the Israeli-Palestinian conflict, it’s not so easy to figure out who is the giant and who the boy with the slingshot; and in two exceptional novels — Joseph Heller’s half-forgotten “God Knows” and Stefan Heym’s fully forgotten “King David Report” — David’s inspiration leads to brilliance.

The point of the aforementioned list is that in the right hands, David’s life makes for peerless source material. And in the wrong hands, it’s the usual dross for philistines (as it were). Which is why when I heard about “Kings,” I felt a mixture of curiosity and trepidation.

“Kings” is a sort of alternate universe version of the David story. It takes place in the fictional Kingdom of Gilboa — whose capital is not in the Middle East, but in a place that looks a lot like New York City. But there’s nary a Hebrew in sight, which, with royal palace hallways bearing an uncanny likeness to those of the New York Public Library, is quite a feat. Still, there are echoes of present-day Israel in that Gilboa is relatively prosperous but locked in a stalemate with its neighbor. And although the Gilboans use the same technology that we do, there are echoes of ancient Israel: Silas, the Saul figure (played ferociously by Ian McShane), forged the kingdom from warring tribes.

When the enemy captures Silas’s son, young David Shepherd (Chris Egan) makes a daring rescue, destroys a supposedly undestroyable “Goliath” tank and becomes a hero to Gilboa — and possibly a rival to Silas.

There are two salient questions about “Kings.” The first is, why now? And the answer isn’t clear. An adaptation of the David story is reason enough, but the attempts at political allegory seem forced. As I mentioned previously, Gilboa is, at some level, a metaphor for present-day Israel. Gilboa also has similarities to the United States, at least from a liberal perspective: The kingdom is beholden to corporate interests and in need of health care reform. These issues don’t work particularly well as plot points, and they don’t tell us anything new about Israel or America.

As for the second question — Is it any good? — the answer is, yes, mostly. Some of the fun, at least for Bible geeks, will be in comparing the TV show to the text, for although “Kings” uses Scripture as a springboard, its choices often do spring. The dour prophet Samuel is re-imagined as the suave, scotch-loving Reverend Samuels (Eamonn Walker), and the king’s wife, a scriptural nonentity, as the controlling Queen Rose (Susanna Thompson). Other choices are less imaginative, or more a product of the constraints of network TV. Egan is an able actor, but his character has been defanged: In the Second Book of Samuel, young David is a lot more brash and calculating. And the dialogue can be uneven, vacillating between wince-inducing attempts at homespun speech and strained imitations of Shakespearian or biblical rhetoric.

Still, whenever “Kings” seems to falter, McShane appears to put bite marks all over the scenery. Also, there’s plenty of sex, or allusions to it, and the Machiavellian machinations kept me guessing. So what if “Kings” doesn’t yet match its own ambitions? If it’s not a highbrow addition to the Western tradition? It’s a TV show that is diverting, and that’s hard enough to achieve. Maybe it will get even better, if NBC gives it a chance to develop. And in the meantime, there’s the remote possibility that it will spark some interest in the riches of its source material.

Gordon Haber last wrote for the Forward about the doctrine of the chosen people.