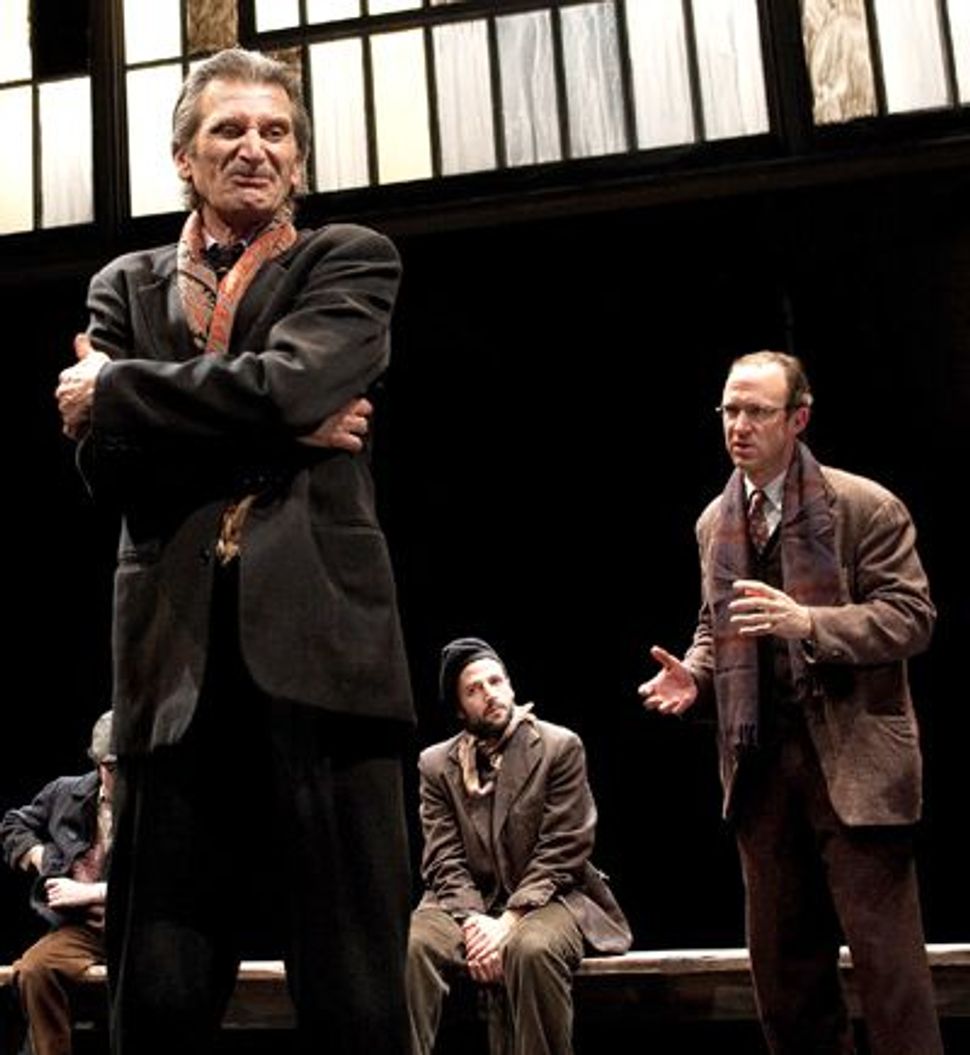 Rationalization Rankles: Who knows what, and who are the apologists for who knows what? A whole society is implicated, here represented by, left to right; the actor (Gregory Salata), the artist (Mark Alhadeff), the psychiatrist (Christopher Burns). Image by STEPHEN KUNKEN 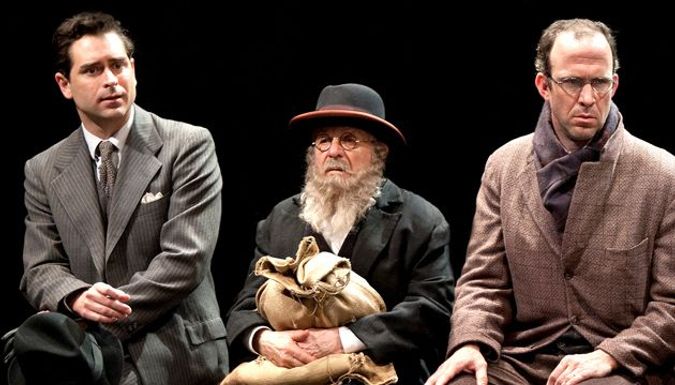 Waiting, but Not for Godot: Todd Gearhart, John Friemann, Christopher Burns playing Jews on a bench. Image by STEPHEN KUNKEN

‘Incident at Vichy” is generally considered one of Arthur Miller’s lesser plays. It was first produced in 1964, in the temporary home, near Washington Square, of New York City’s newly created Lincoln Center Theater. Despite a stellar cast including David Wayne, Hal Holbrook and Joseph Wiseman, and direction from Harold Clurman, this much anticipated drama garnered mixed reviews, and rarely has it been revived. Fortunately, The Actors Company Theatre, an enterprising off-Broadway group, has brought it back for a limited run in a far more intimate theater. And under the taut direction of Scott Alan Evans, who is aided by a lesser-known but first-rate cast, this disturbing, unsentimental play can be re-evaluated by today’s audiences.

Miller’s 90-minute drama, featuring an all-male cast of 15, is set in a detention facility in Nazi-occupied Vichy in 1942. It unfolds slowly, as a group of men are silently brought into a large room, where they are seated on a bench, wondering, nervously, why they are there. 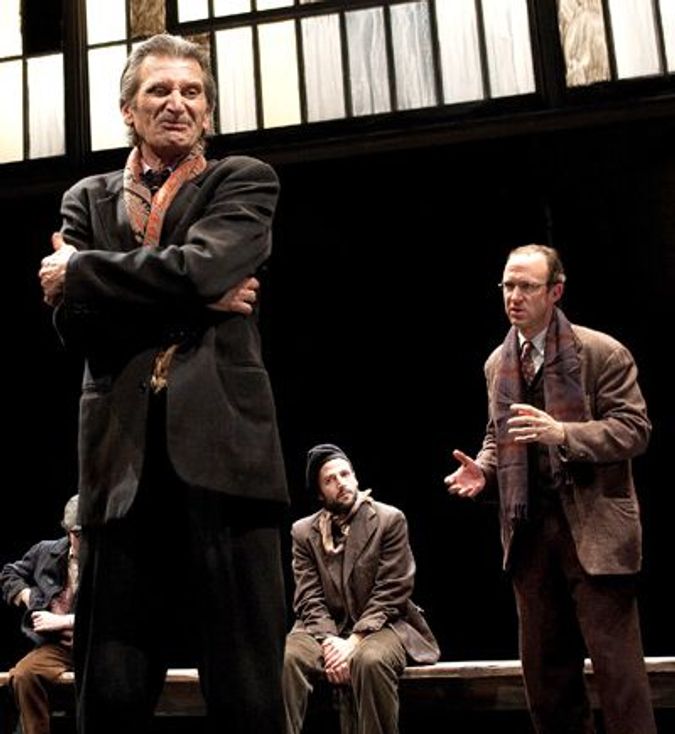 Rationalization Rankles: Who knows what, and who are the apologists for who knows what? A whole society is implicated, here represented by, left to right; the actor (Gregory Salata), the artist (Mark Alhadeff), the psychiatrist (Christopher Burns). Image by STEPHEN KUNKEN

These detainees, strangers to one another, have been brought in by French and German authorities for reasons not immediately clear to them. One man, a scruffy artist named Lebeau, cannot comprehend why anyone would want to measure his nose. The others include a businessman (Marchand), a psychiatrist (Leduc), a Socialist electrician (Bayard), a gentile Austrian prince (Von Berg) and an actor (Monceau), as well as unnamed characters listed merely as “waiter,” “young boy” and “old Jew.” All, we soon discover, are suspected of being Jewish. One by one, the detainees are brought into an interrogation room, where their papers are ostensibly being checked. Most of these people do not appear again. We never see the inside of this room, but we hear sounds of laughter and cries of pain.

There is little overt dramatic action in “Incident at Vichy” until its final moments. Much of the play consists of conversations, often heated, among the captives as their ideas and personalities sharply delineate them. Gradually we hear of rumors of furnaces in Poland, of ominous freight cars locked from the outside. There is talk of penises being checked. The tension builds as the men soon become aware of the terrible fate possibly awaiting them. But Miller’s purpose in dramatizing what he ironically labels an “incident” is far more complex than showing innocent Jewish victims and sadistic Nazi captors. Audiences today are burdened by awareness of what happened during this tragic period, and such knowledge, contrasted with the sometimes willful ignorance of the captives, accounts for much of the play’s power. Although we witness some cruel behavior during the course of the drama, the playwright is less interested in depicting the events of the Holocaust than in asking how *and why* this genocide was allowed to happen.

An earlier Miller play, “The Crucible,” (1953) dealt with the 17th-century Salem witch trials, but deliberately evoked the 20th-century political hysteria generated by anti-Communist “witch hunts.” In “Incident at Vichy,” Miller links the Holocaust to destructive patterns of thought and action that continue to plague us, perhaps even more so today than when “Vichy” was originally produced 45 years ago, before the world learned of genocide in Rwanda and Darfur, or torture in Abu Ghraib and in other sites around the world. We continue to wrestle with matters of guilt and moral responsibility for today’s tragedies, and it is therefore not surprising that so much of our popular culture continues to examine the Holocaust for some understanding of human behavior. Miller is profoundly concerned, perhaps even obsessed, with these issues. As Clurman points out in his introduction to Miller’s writings in Viking Penguin’s “The Portable Arthur Miller:”

‘Incident at Vichy’ reiterates… our proclivity to evade troublesome facts so that confrontation with evil and hence our responsibilities for it are avoided.

In a somewhat over-formulaic manner, with perhaps too many rhetorical flourishes, Miller gives each of his main Jewish characters in “Vichy” a kind of credo, a way of coping with the dangerous world around them. For example, the painter, Lebeau, claims that despite the obvious dangers facing Jews in occupied Vichy, “people won’t believe they can be killed.” Rather than remaining indoors to avoid such danger, he chooses to venture outside, stating: “You get tired of believing in the truth. You get tired of seeing things clearly.” As Monceau, the actor, insists, “The important thing is not to look like a victim.” He argues that instead, “One must create one’s own reality in the world.” Further, he says, “After all, you are trying to create an illusion; to make them believe you are who your papers say you are.” He adds, “I go on the assumption that if I obey the law with dignity I will live in peace.” The socialist, Bayard, far more perceptive about the Nazis than his fellow captives are, places his faith in the future “in the day when the working class is master of the world.”

Even more grounded in reality is Leduc (beautifully portrayed by Christopher Burns), whose training as a psychiatrist helps him understand the irrational and dark side of humanity: “I am only angry that I should have been born before the day when man has accepted his own nature; that he is not reasonable, that he is full of murder, that his ideas are only the little tax he pays for the right to hate and kill with a clear conscience. I am only angry that, knowing this, I still deluded myself.”

It is in the final scene of the play, an emotionally charged confrontation between Leduc and the sensitive Catholic aristocrat Von Berg that Miller’s own point of view clearly emerges. Since Von Berg is a gentile picked up by the Nazis because his Austrian accent made him a possible Jewish refugee living in France, he is granted freedom. But moments earlier, despite his claim that he has never spoken ill of the Jews and that he deplores Nazi vulgarity, his personal responsibility for what he did — or didn’t do — during this period is dramatically brought home to him. What he finally does with his freedom and his newly acquired guilt brings Miller’s troubling tale to a wrenching conclusion.

Leonard Fleischer teaches musical theater at the City University of New York and is a longtime contributor to the Forward.