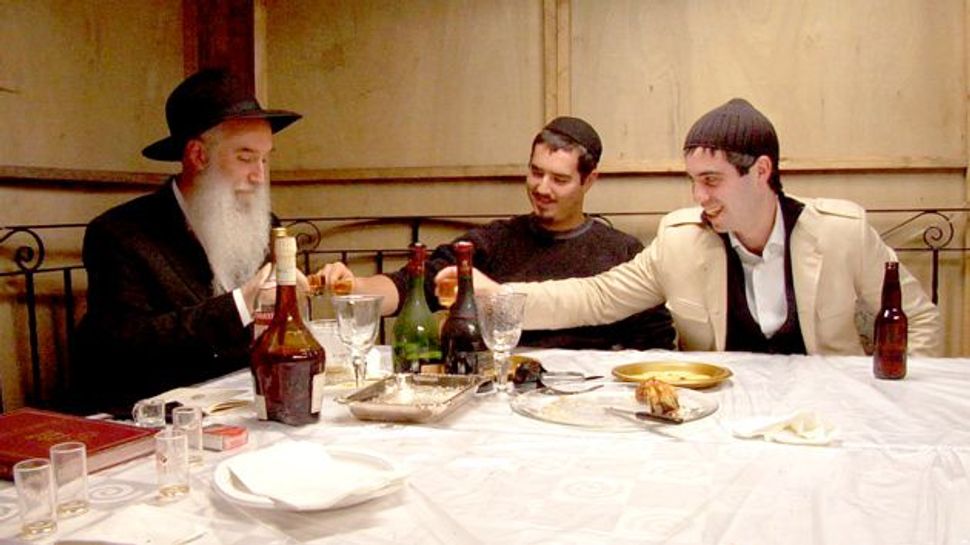 The Family That Eats Together: From left, Pincus, Levi and Hudi break bread here, but are riven by their different life choices. Image by COURTESY OF ERIC SCOTT

Levi Riven doesn’t look like a compelling subject for a documentary film. But the amiable, slightly graying psychology student is at the center of Montreal filmmaker Eric Scott’s recent movie, “Leaving the Fold,” a revealing look at Hasidic Jews who have abandoned their religious upbringing for a secular lifestyle.

After receiving plaudits at the Montreal film festival last year, the film will air on Canadian public television April 20. During the spring, it also will have showings on Belgian, Finnish and Australian television.

Riven, 28, is currently finishing his work toward a bachelor’s degree in psychology at Montreal’s Concordia University, where he is a research assistant. He hopes to continue with an academic career in experimental psychology. It’s a far cry from the strictly religious Lubavitch community in which he was raised.

“There are positive things about being Hasidic,” he acknowledged. “It can be a fun place to be. There’s a big emphasis on happiness, and on spiritual and intellectual development. But it can also be a real drag.”

“The life I lead is one of curiosity and exploration, which is not really possible if you’re a Hasid,” he says in the film.

Riven is one of the five formerly religious subjects of Scott’s film. The others are his younger brother Hudi, New York musician Basya Schechter (who also provides the film’s score) and two Israelis, Sara Lock and a young man who remains unnamed throughout.

“Hasidim are not looked upon with unmitigated pleasure,” Scott said. “That made it a hot-button item.”

Scott is no stranger to controversy, or to making films about uncomfortable truths. His 2002 documentary, “Je me Souviens,” addressed the fascistic and antisemitic history of Quebec, particularly in the 1930s and ’40s. His following film, “The Other Zionists” (2004), documented Jewish peace activists who seek to protect Palestinians at Israeli checkpoints and border crossings. Despite Scott’s controversial subject matter, his philosophy has always been to portray his subjects sympathetically rather than antagonistically.

In “Leaving the Fold,” Scott’s nonintrusive approach to filmmaking allows his subjects to emphasize their differences as much as they do their similarities. While Riven credits his departure from religion to his curiosity about the larger world (and, off-camera, to a typically adolescent rebellion), Lock recounts the repressive atmosphere of her community and a particularly traumatic episode in which her sister was beaten for wearing pants.

But underlying these differences, Scott has a larger point to make. Rather than trying to fit all his subjects into a single mold, he allows them to speak for themselves, uninterrupted by even his own questions. Every person has a story, the film seems to say, though these people share similar problems.

In a further effort to balance “Leaving the Fold,” Scott also reached out to get the Hasidic community’s side of the story. The film features lengthy interviews with Snir Bitton, a Lubavitch rabbi who specializes in reaching out to those on the fringes of faith, and Pinchus Riven, the father of Levi and Hudi.

But gaining the trust of his Hasidic interviewees was far from easy.

“Pinchus said to me, okay, who are you? You want to make a film of my family? Who’s your family?” said Scott, who spent a year, along with his wife and children, getting to know the Riven family before he began filming.

In the end, it’s Pinchus Riven who proves to be one of the film’s most sympathetic elements, providing not only a religious perspective, but also one of a parent. Rather than arguing about the finer points of faith with his sons, he emphasizes the richness of his children’s religious heritage and tells them that they can always return. When he describes how, every day, he prays for them, he nearly chokes up.

“My father comes across very sympathetically, and that might not be what you would expect. He seems to be the character that a lot of people identify with,” Riven said.

Making the film was an eye-opening experience for Scott and for his subjects. In addition to those interviewed for the film, Scott met many other Orthodox Jews who demonstrated the variety of individuals within the community.

Being filmed also allowed the Riven family members to express their differences in ways that they never had previously.

“We were able to say things to the camera that we weren’t able to say to each other. The film has allowed my father and my brother and me to really discuss these matters openly and understand how each other feels,” Riven said. “[Scott] didn’t want us to have prepared answers, didn’t want us to seem like politicians. He wanted maybe to catch us off guard sometimes, and we were.”

The film’s openness to both sides of the story has won praise from both the Orthodox and secular communities. Even ultra-Orthodox Jews who are not willing to go to a movie theater have been ordering the film on DVD.

“Religious people who haven’t seen it tend to be suspicious. They think that they’re being demonized. But I know a few people close to my father who had gone to see it and were impressed,” Riven said.

The film has even made him feel understood by the religious community, with whom he is often at odds.

“One woman came up to me recently at my sister’s wedding and said, ‘Good for you,’ which is not what you might expect,” Riven said. “She seemed to appreciate that people need to be themselves.”

Ezra Glinter is a Canadian writer and freelance journalist.